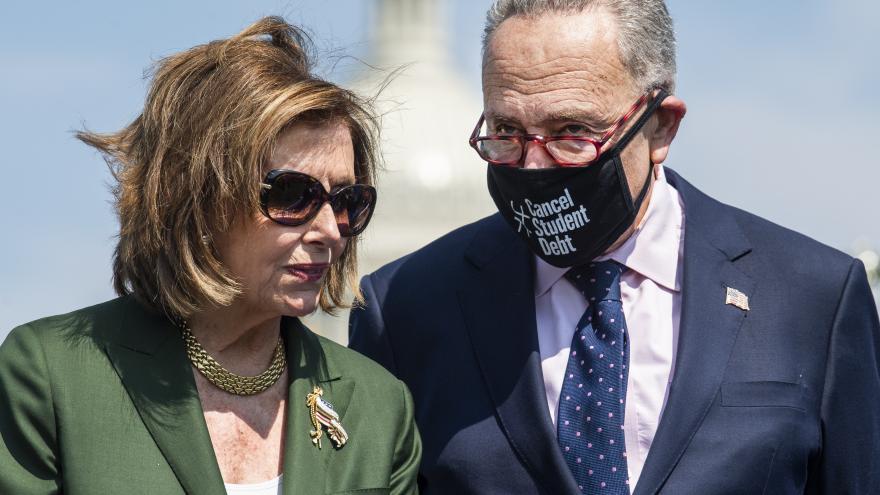 (CNN) -- With a debt limit crisis averted for now, the Democratic Party's effort to finalize a sweeping economic package to expand the social safety net will be front-and-center on Capitol Hill this week.

Democrats must make a series of hard decisions over how much they are willing to spend on the package and what will be included, a challenge made more difficult amid persistent and stark divisions between progressives and moderates. If the party can't reach consensus, a key pillar of President Joe Biden's domestic agenda is at risk of falling apart.

Also at risk is a separate $1.2 trillion bipartisan infrastructure bill. Top Democrats have pushed for the bipartisan bill to pass out of the House before the end of the month, but its fate is intertwined with the larger economic package and that time frame looks likely to slip.

Congressional Democratic leaders now have the difficult task of attempting to steer their members toward compromise as they warn that some priorities may not make it into a final deal.

Senate Majority Leader Chuck Schumer wrote in a letter to the Senate Democratic caucus on Thursday, "To pass meaningful legislation, we must put aside our differences and find the common ground within our party. As with any bill of such historic proportions, not every member will get everything he or she wants."

At the end of last month, House Democratic leaders punted on a vote on the infrastructure bill amid a progressive revolt. Progressives have long made clear they do not want to move forward with the bipartisan bill without a vote on the larger economic package. The progressive bloc does not want to lose leverage to negotiate over the social safety net legislation with moderates intent on getting the bipartisan infrastructure bill signed into law.

After it became clear the infrastructure bill would not pass out of the House in September, Pelosi outlined an end of October deadline for the effort, saying earlier this month in a letter to Democrats that the bipartisan bill "must pass" prior to October 31.

Schumer also outlined an October timeline in his letter to the Senate Democratic caucus as he noted the challenges of pursuing a dual track strategy to enact both legislative priorities.

"I have said from the beginning that the execution of the two-track legislative strategy for the Bipartisan Infrastructure bill and the Build Back Better Act would be difficult," he wrote.

"At the end of the day, we will pass legislation that will dramatically improve the lives of the American people. And we must aim to do that in the month of October," he added.

If work on the economic package spills past the end of October, Democrats could still get it done at a later date in November or December. But it won't be long until Congress must once again confront other pressing matters.

The debt limit and government funding to avert a shutdown have both been extended on a short-term basis into early December, setting up another looming fiscal crisis that will undoubtedly take up much of lawmakers' time and energy in the weeks ahead.

The price tag and the details

Two major sticking points for Democrats looking to lock down a deal on the economic package are what the overarching price tag should be and what will be included.

Progressives have pushed for a price tag of $3.5 trillion, but key moderate Democratic senators, Joe Manchin of West Virginia and Kyrsten Sinema of Arizona, have both indicated they will not support that.

Party leaders have now made clear that the price tag will have to be scaled back to reach a deal.

Biden said during a meeting with a group of House progressives earlier in the month that the top line of the social safety net package needs to come down to somewhere between $1.9 trillion and $2.2 trillion.

As of now, however, Democrats have still not reached a consensus on the overall cost of the package.

On a call with a small group of fellow Democrats last week, neither Sinema nor Manchin endorsed the $1.9 trillion - $2.2 trillion price tag that Biden has privately floated, saying they have yet to see details from the White House on such a proposal -- even as progressives have indicated that figure is too small for the package.

A scaled back price tag means Democrats must decide how to structure the scope of the bill and has set off a debate over whether they will cut certain policy items or implement an array of programs within a more limited time horizon instead.

Progressives are making clear that they don't want to see major cuts.

"If given a choice between legislating narrowly or broadly, we strongly encourage you to choose the latter, and make robust investments over a shorter window," members of the Congressional Progressive Caucus leadership wrote in a letter to Pelosi.

What's on the chopping block?

The stakes are extremely high for Democrats given how many key liberal priorities they have been hoping to pack into the economic package and the fact that the package represents an opportunity to deliver on long-standing promises to voters. The legislation has been envisioned as broadly addressing a wide-range of issues, including health care, aid to families and climate change.

"How do you pit child care against paid leave? How do you pit pre-K against housing? How do you pit climate change against any of those things?" Rep. Pramila Jayapal of Washington, the Congressional Progressive Caucus chair, said in a recent interview on CNN's "Newsroom."

"We would be willing to cut down the years a little bit, but we do need to have all of those priorities in the bill," she added.

Climate policy in particular seems like it could be on the chopping block, after three congressional sources told CNN on Friday evening that the Clean Electricity Performance Program, the cornerstone climate policy in Democrats social safety net package, will likely be dropped from the final deal after pushback from Manchin.

"He is not there on the CEPP period. We've been trying," one Democratic aide with knowledge of the negotiations told CNN. The aide told CNN late last week that Democrats are trying to find ways to restructure the program to fit Manchin's concerns while still reducing greenhouse gas emissions.

Manchin spokeswoman Sam Runyon told CNN in a statement Friday that the senator "has clearly expressed his concerns about using tax payer dollars to pay private companies to do things they're already doing. He continues to support efforts to combat climate change while protecting American energy independence and ensuring our energy reliability."

Jayapal on Saturday denied that Manchin tanked the climate provisions in Biden's larger economic bill, saying that "there's no decisions that have been made, the negotiations are continuing."