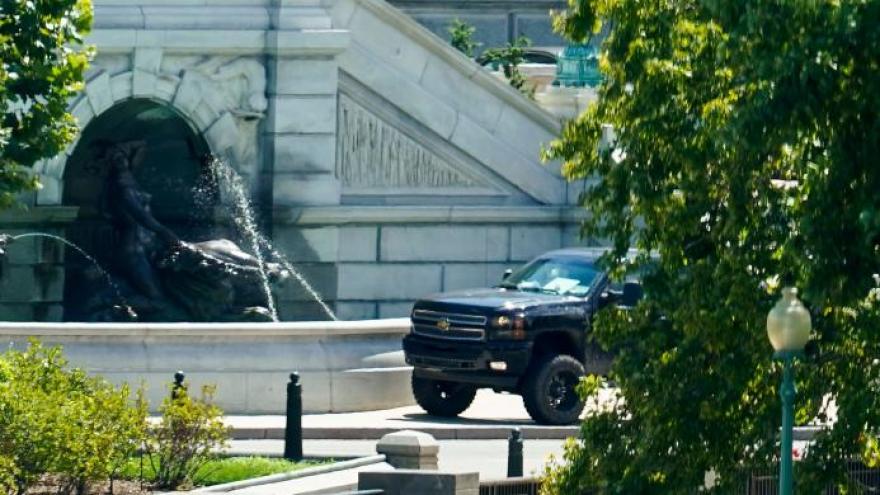 Floyd Ray Roseberry, who allegedly threatened to detonate a bomb near the US Capitol on Thursday, is expected in court Friday. This image shows Roseberry's truck parked in front of the Library of Congress Building,Thursday, August 19.

(CNN) -- The Justice Department has charged Capitol bomb threat suspect Floyd Ray Roseberry with threatening to use a weapon of mass destruction and attempting to use an explosive device, a judge said Friday.

The charges were unsealed during Roseberry's first court appearance in DC District Court. Roseberry, who identified himself as 51, is currently in jail, and prosecutors say they will seek to keep him behind bars while his case progresses in court.

Roseberry, who was taken into custody after allegedly threatening to detonate a bomb near the US Capitol on Thursday.

The day before, a person related to Roseberry warned local law enforcement in North Carolina that he was planning to travel to Washington, DC, or Virginia to "conduct acts of violence," according to court documents unsealed Friday.

A local official from Cleveland County, North Carolina, who was not named in court documents, contacted the FBI on Thursday as events were unfolding in Washington. The detail was revealed Friday in an affidavit in support of the criminal complaint filed against Roseberry.

The person related to Roseberry, unnamed in the affidavit, also reported to the North Carolina official that Roseberry "had stated that he 'ordered a trench coat to protect him from Taser and pepper ball guns and he would just tip his cowboy hat at the police,'" according to the affidavit.

Roseberry appeared in a teleconference before US Magistrate Judge Zia Faruqui on Friday afternoon. The hearing was kept brief as questions were raised about the health of Roseberry, whom authorities had identified as being 49 years old on Thursday. Roseberry told the judge he had not, in the last two days, taken his medications for his blood pressure and for his "mind."

"My concern is that the defendant has stated that he is unable to understand the proceedings today without his medication," Faruqui said during the hearing, and the judge ordered a psychological evaluation.

During a standoff with police on Thursday, Roseberry ranted about access to health care and other political matters, pushing several right-wing talking points about immigrants and Democrats. He did not have any outbursts during Friday's court hearing and praised the judge who was handling the virtual proceedings.

"We don't have to see each other eye-to-eye," Roseberry told the judge. "I can tell in your voice that you're a good man. And I don't have to not trust you. I'm willing to do whatever you ask."

At the hearing, the judge appointed David Bos, a public defender, to represent Roseberry.

The Thursday incident prompted multiple buildings in the area to be evacuated as authorities responded to an "active bomb threat investigation," the US Capitol Police wrote on Twitter.

USCP said in a news release later Thursday that no bomb was found in Roseberry's truck but that he did possess suspected bomb-making material. DC Police said in a tweet that the vehicle he was driving had been "cleared," and that road closures near the scene were lifted. USCP Chief Tom Manger, who told reporters on Thursday that authorities couldn't yet identify a motive, said that so far there is "no indication" Roseberry was acting with others.

Roseberry had been live-streaming from the scene, Manger said. A roughly half-hour Facebook video showed him inside a truck, holding a cannister that he said was a bomb and speaking about a "revolution." The video and Roseberry's Facebook profile have since been removed.

On Roseberry's now-removed Facebook page, he frequently made pro-Trump posts and posted videos from Trump's "Million MAGA March" on November 14.

The next hearing in Roseberry's case is scheduled for Wednesday afternoon.