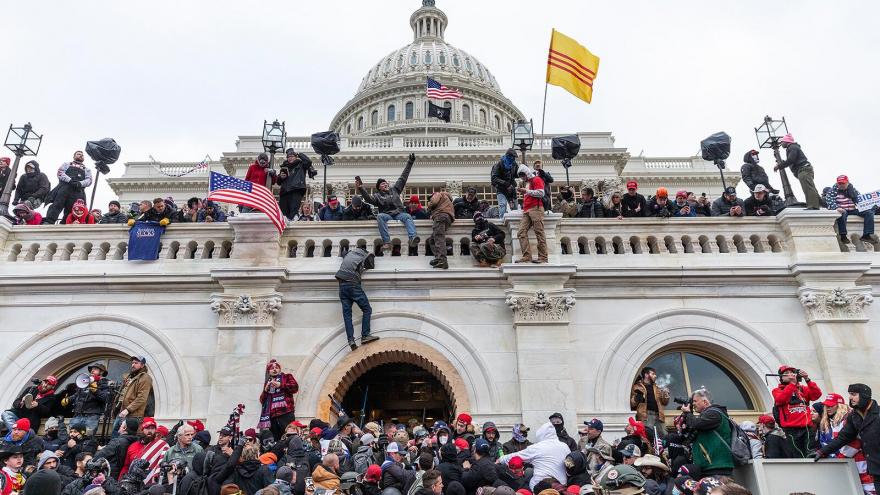 Protesters seen all over Capitol building where pro-Trump supporters riot and breached the Capitol on January 6, 2021. The attending physician warns lawmakers and staffers of the potential for Covid-19 exposure.

(CNN) -- Lawmakers and Capitol staff on Sunday received a memo from the Capitol's attending physician warning of a possible risk of Covid-19 exposure after a large group of lawmakers were forced to gather in a secure location during the breach of the US Capitol last week.

"On Wednesday January 6, many members of the House community were in protective isolation in (a) room located in a large committee hearing space. The time in this room was several hours for some and briefer for others. During this time, individuals may have been exposed to another occupant with coronavirus infection," Dr. Brian P. Monahan wrote.

In the memo, Monahan instructed lawmakers and staff to monitor for possible Covid-19 symptoms and to be tested for Covid-19 as a precaution.

The risk of an outbreak comes as Congress has faced dozens of members from both chambers contracting Covid-19 since the pandemic began. Members of Congress have been prioritized for inoculation in an effort to maintain governmental continuity on Capitol Hill, and a number of lawmakers have received a Covid-19 vaccine.

The Capitol physician did not specify which lawmakers may have been exposed nor did he say in which safe room the exposure occurred.

CNN previously reported that six House Republicans were captured on video refusing masks offered by a colleague during the US Capitol insurrection on Wednesday. The video, shot from inside a safe room where the lawmakers gathered during the chaos, was published on Twitter by Punchbowl News.

Reps. Marjorie Taylor Greene of Georgia, Markwayne Mullin of Oklahoma, Andy Biggs of Arizona, Scott Perry of Pennsylvania, Michael Cloud of Texas and Doug LaMalfa of California could be seen in the video unmasked and gathered closely together.

They declined the offer from Delaware Democratic Rep. Lisa Blunt Rochester, who had approached them with blue surgical masks.

It was not immediately clear if those lawmakers were among the members of Congress potentially exposed.