Cannibalistic lancetfish washes up on a San Diego beach, the first one preserved there since 1996 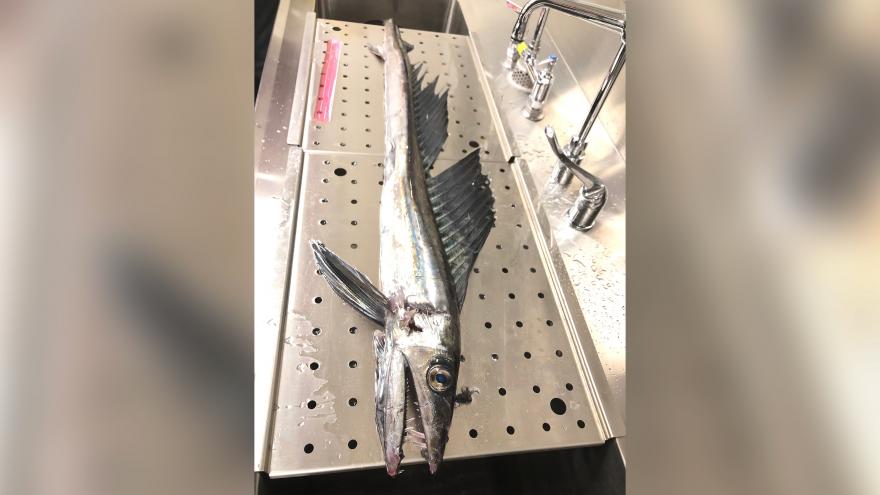 (CNN) -- Beachgoers discovered a 4-foot lancetfish washed up near the Scripps Institution of Oceanography at University of California, San Diego Tuesday. Although not particularly rare, researchers noted it was the first lancetfish preserved by the institutionsince 1996, and only the 17th preserved from a San Diego beach since 1947.

The finding comes just a week after a Pacific footballfish -- a deep-sea anglerfish much rarer than the lancetfish -- washed up about three miles away on Black's Beach.

The fish, whose catalog name is SIO 21-37, is the newest addition to the SIO's Vertebrate Collection. Manager Ben Frable told CNN the fish was found at La Jolla Shores alive but didn't survive once on land. It had been "bombarded by seagulls," according to Frable. SIO 21-37, though, will be preserved for possibly hundreds of years.

Frable suspects the fish could have landed on the beach for a number of reasons including running from a predator or getting caught in a current and not being strong enough to swim out.

Lancetfish are known for their enormous eyes, fanged jaws, and a slithery body, according to the National Oceanic and Atmospheric Administration. Lancetfish, which are hermaphrodites, animals with both reproductive organs, are notorious cannibals which also feed on other fish and invertebrates. The fish can grow to more than 7 feet long and barely digest their food.

But Frable confirms cannibalism is not as taboo in the fish world as it seems.

Frable said little is known about lancetfish and this particular behavior since they are not easily observed at lower depths, even though they are found in all of the world's oceans. The lab took tissue samples that could be used to determine genetics and other data.

"From a research perspective, lancetfish help provide a window into the open ocean food web," Frable said. "So being able to learn more about how nitrogen and carbon are moving around in the open ocean and what that might mean for interactions on a global scale is super important."