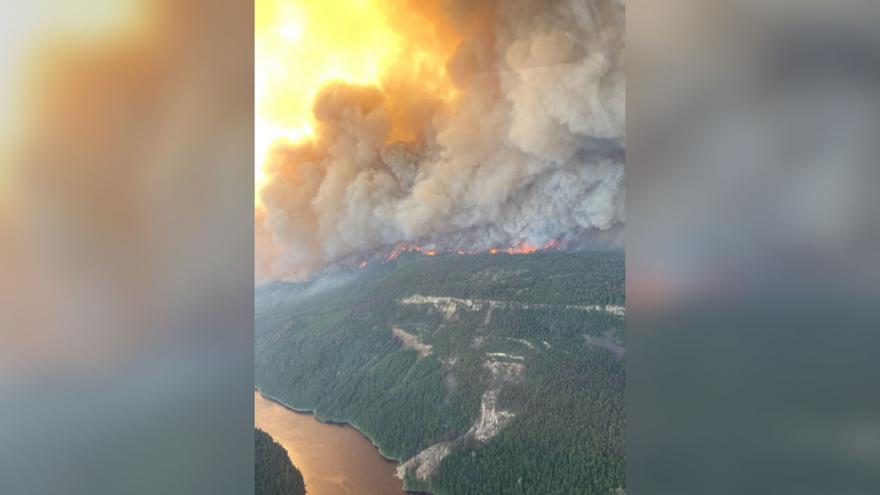 (CNN) -- The Canadian village that set an all-time national heat record this week has been "devastated" by a fast-moving wildfire that engulfed the small town "within minutes" following an intense heat wave, officials said Thursday.

Two people have died from the fire that devastated the small Canadian village of Lytton, the British Columbia Coroners Service said on Friday.

Officials from Lytton say they are still searching for missing residents as most of the community burned to ground on Wednesday, just a day after it broke a record for the hottest temperature ever recorded in Canada.

Lytton Mayor Jan Polderman told CNN affiliate CTV News Friday that within minutes on Wednesday, "there was fire everywhere," leaving no time to knock on doors and tell people to evacuate.

The fire destroyed "most homes and structures in the village" of Lytton and several residents are unaccounted for, British Columbia Public Safety Minister and Solicitor General Mike Farnworth said at a news conference Thursday evening.

More than 1,000 people in and around Lytton were forced to evacuate Wednesday night within a moment's notice as flames quickly moved in, BC Premier John Horgan said.

"Lytton has been devastated and it will take an extraordinary amount of effort to get that historic location back to what it was," Horgan said.

Polderman, who quickly notified residents of the imminent wildfire and issued an evacuation order, has been "traumatized" by the event, Horgan said.

The mayor issued the evacuation order late Wednesday, advising residents "to leave the community and go to a safe location," according to a news release from the village.

"It's dire. The whole town is on fire," Polderman told CBC News. "It took, like, a whole 15 minutes from the first sign of smoke to, all of a sudden, there being fire everywhere."

"At the First Nation band office, the fire was a wall about three, four feet high coming up to the fence line. I drove through town, and it was just smoke, flames, the wires were down," Polderman told the Canadian broadcast network.

Video captured by residents fleeing the town show numerous structures on fire in every direction.

Brad Vis, a member of Parliament who represents the Lytton area, said in a Facebook post that 90% of the village is burned, including its center.

Fire damaged hydro stations, as well as rail and highway infrastructure, according to Vis' post. Highway access into town is compromised and there are reports of several injuries, he said.

Lytton, which is about 195 miles east of Vancouver, has a population of about 250 residents.

'Not how we usually roll in a temperate rainforest'

The wildfire has burned more than 6,400 hectares, or roughly 16,000 acres, as of Thursday evening, the British Columbia Wildfire Service posted on its website. Officials expect the fire to grow as conditions remain hot, dry, and windy.

The fast-moving blaze came after a historic heat wave brought extreme conditions to the Northwest US and Western Canada. There are currently 127 active fires in British Columbia, according to the BC Wildfire Dashboard, with 58 fires burning in the last two days and 172 fires in the past week.

"I cannot stress enough how extreme the fire risk is at this time in every part of British Columbia," Horgan said.

The premier said he spoke with Prime Minister Justin Trudeau about the situation, who promised the federal government is ready to send resources to the area as needed.

At a news conference Friday, Trudeau said that his government will work to adapt and mitigate the effects of climate on communities

"My thoughts are obviously with families that are grieving, that are facing terrible loss, but of course we also have to reflect on the fact that extreme weather events are getting more frequent and climate change has a significant role to play in that," Trudeau said.

Farnworth called the fire "catastrophic for the community" of Lytton and said he may issue a state of emergency, depending on how the fire season continues to unfold.

Horgan warned that the region is seeing more destructive wildfires as a result of climate change.

"I regret to say that this is the third of five years of horrific fires in my time in this job," he said. "This is not how we usually roll in a temperate rainforest."

"We are in a changing environment, and climate change is affecting all of our lives in meaningful ways," the premier said. "It's graphic when you see the record temperatures that we've experienced in every corner of British Columbia."

In a tweet early Thursday, the BC Wildfire Service said it was responding to the "evolving situation" in Lytton by assisting the village's fire service.

The nearby city of Merritt has opened a reception center for evacuees from Lytton, according to its Facebook page.

Temperatures in Lytton climbed to 121° F (49.5° C) on Tuesday, the highest temperature ever recorded in Canada. It was the third day in a row that records were smashed in the area, according to ECCC Weather British Columbia.

To date, the province has experienced 450 fires this year, it said.

The extreme temperatures have had devastating impact on the province as more the 230 deaths have been reported in British Columbia since Friday, officials said Tuesday.

The province's chief coroner called it an "unprecedented time."

"Since the onset of the heat wave late last week, the BC Coroners Service has experienced a significant increase in deaths reported where it is suspected that extreme heat has been contributory," Chief Coroner Lisa Lapointe said in a statement.