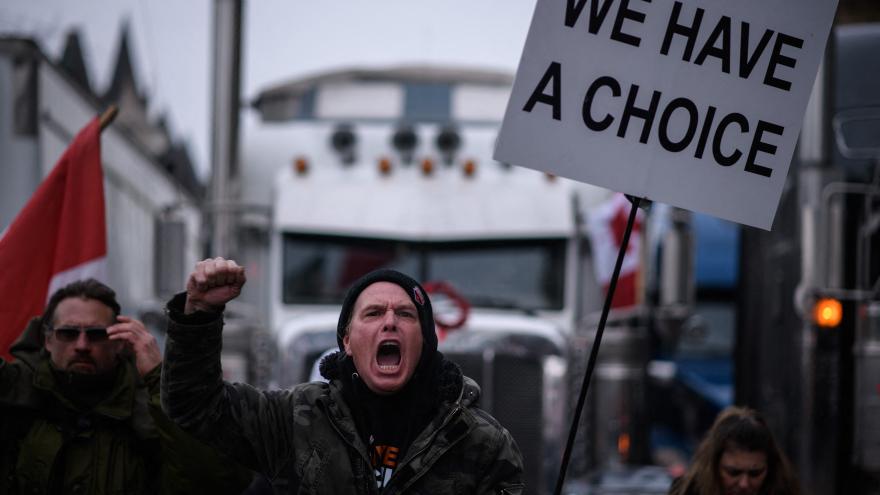 Police in Windsor, Ontario, tweeted shortly before 8:30 a.m. ET that they "commenced enforcement at and near the Ambassador Bridge."

"We urge all demonstrators to act lawfully & peacefully. Commuters are still being asked to avoid the areas affected by the demonstrations at this time," the tweet reads.

The move comes a day after the issuance of a court order geared toward winding down the blockade that has snarled supply chains and alarmed political leaders.

An Ontario judge granted an injunction Friday to Windsor allowing police to begin clearing the bridge. The judge gave demonstrators until 7 p.m. Friday to end the blockade.

The number of demonstrators dwindled overnight, but about 50 vehicles remained as the sun rose Saturday, a CNN crew there said. Some protesters, bundled against below-freezing temperatures, stood or sat in chairs outside.

Demonstrators could be arrested if they are involved in blocking the bridge, and vehicles may be seized and could be forfeited in case of a conviction, Windsor police said.

"One by one, we'll start towing the cars if required," Windsor Mayor Drew Dilkens said Friday, a few hours before the judge's deadline.

The Premier of Ontario, Doug Ford, also declared a state of emergency on Friday, promising "severe" consequences for those who are taking part in blockades at the bridge and elsewhere in the province, including at demonstrations in the nation's capital of Ottawa.

People who don't leave the blockades could face a maximum penalty of $100,000 and up to one year in prison, he said.

"So let me be as clear as I can, there will be consequences for these actions, and they will be severe. We've already started by going after the money funding the illegal occupation," Ford said.

Demonstrations in Canada began last month, starting with truckers who convoyed from the west to Ottawa to protest new rules forcing Canadian truckers crossing the US-Canadian border to be fully vaccinated against Covid-19 or face quarantine in their homes for two weeks when they return.

That protest drew other demonstrators around the country in resistance to other Covid-19 preventative measures, including restrictions on gatherings and mask mandates -- especially in schools.

Canada has one of the highest vaccination rates in the world, with about 4 in every 5 Canadians fully vaccinated, according to data from Johns Hopkins University. And nearly 90% of the country's truckers are fully vaccinated and eligible to cross the border, according to the Canadian government.

Yet for two weeks, demonstrators have blockaded Ottawa's downtown core, prompting a judge there to rule Monday that they must stop honking.

And the Ambassador Bridge between Windsor and Detroit is not the only affected border crossing. Demonstrators also have used semitrailers -- and sometimes farm equipment and other vehicles -- to block crossings between Emerson, Manitoba, and Pembina, North Dakota, as well as at the Coutts access point between Alberta and Montana.

"It's completely unacceptable," Watson said. "Particularly in the neighborhoods where some of the protesters are going into restaurants and refusing to wear a mask and harassing staff and really being belligerent to the residents of our city."

How Canadian officials are responding to the gridlock

Officials have generally stood firm in their appeals to end the blockade, though those calls have fallen on deaf ears.

Prime Minister Justin Trudeau reiterated that the demonstrations will end.

"If you joined the protests because you're tired of Covid, you now need to understand that you are breaking laws," Trudeau said in a Friday news conference. "You don't want to end up losing your license, end up with a criminal record, which will impact your job, your livelihood."

The Canadian protests are igniting concerns among US officials that similar demonstrations may be sparked across the border. Right-wing news media outlets have raised the prospect of like-minded rallies in the US and offered positive coverage of those in Canada.

The protests already are "incredibly damaging" to many across the US Midwest, Michigan Gov. Gretchen Whitmer told CNN on Friday, adding the protests have been "hurting us in Michigan since Day 1."

The Department of Homeland Security warned state and local officials in a bulletin that a convoy of truckers protesting Covid-19 vaccine mandates may soon begin in the US and potentially affect the Super Bowl in Southern California.

In addition, a group in the US said it is organizing two trucker convoys that will head to the US-Canada border in Buffalo on Saturday and Sunday.

However, the city said Friday the group had not applied for permits to hold events.

"Nor have the organizers contacted our Special Events Office to arrange for the appropriate insurance and public safety planning that is required for all events in the City to ensure the health and safety of residents and visitors," City of Buffalo spokesperson Michael DeGeorge told CNN. "It is always a concern when laws that are designed to keep people and property protected are willfully ignored."