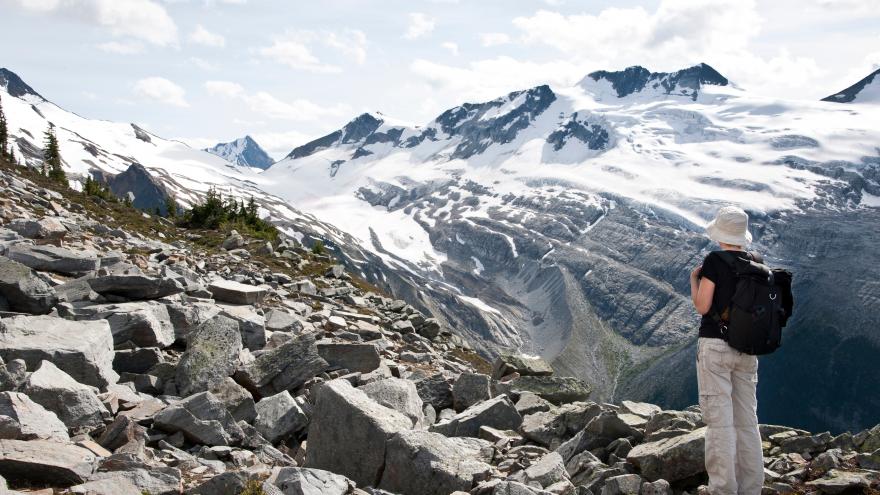 (CNN) -- Much has been said about the healing power of nature. Now, some medical professionals in Canada are increasingly prescribing it.

Doctors are instructing their patients to wander park trails, feel the crunch of leaves beneath their feet and breathe in fresh air. It's part of BC Parks Foundation's growing PaRX program, which intends to improve people's mental and physical health by connecting them with nature.

Since PaRX launched in November 2020 participating doctors have prescribed countless hours in the sun.

"We do have a standard recommendation that you spend at least two hours in nature each week and at least 20 minutes each time to maximize those health benefits," PaRx director and family physician Dr. Melissa Lem told CNN. "There's almost no condition that nature isn't good for, from diabetes to high blood pressure. ADHD in children, anxiety and depression."

A recently announced partnership with Parks Canada Agency will build on that success by allowing doctors to prescribe and provide Parks Canada Discovery Passes to their patients. The free passes grant admission to 80 sites, including national parks, marine conservation areas and historic places throughout Canada.

"We are very lucky in Canada to have a world of beautiful natural spaces at our doorstep to enjoy healthy outdoor activities," Steven Guilbeault, minister of Environment and Climate Change, said in a news release announcing the new initiative. "This exciting collaboration with PaRx is a breakthrough for how we treat mental and physical health challenges, and couldn't come at a better time as we continue to grapple with the impacts of the COVID-19 pandemic on our daily lives."

'The fourth pillar of health'

Lem grew up in a predominantly White suburb of Toronto where she was usually the only person of color in her school and neighborhood, she says. Often confronted with racism and the feeling she "just didn't belong," Lem sought solace in nature, whether it was her parents' garden or a nearby park.

After visiting a national park for the first time at the age of 8, Lem realized she wanted to work in a profession that would allow her to bring nature into people's lives.

Decades later, after graduating from medical school and becoming a family physician, she found a way to combine her passion for nature with health care. In 2019, Lem reached out to BC Parks Foundation and shared her research showing how spending time in nature can lead to better physical and mental health.

Within a year, she had worked with the foundation to launch the PaRx program.

"There's so many different ways that nature is good for our bodies and brains, so it's also really effective health intervention," said Lem. "We like to say that it should be the fourth pillar of health, along with healthy diet and sleep and exercise."

Lem isn't alone in her belief that nature can heal.

A 2017 study by researchers at Harvard T.H. Chan School of Public Health and Brigham and Women's Hospital in Boston found that living in, or near, green areas can help women live longer and improve their mental health. Another study, published in 2021, found that city children who have daily exposure to woodland have better cognitive development and a lower risk of emotional and behavioral problems.

PaRX isn't the first program to act on such findings. Similar programs have been implemented across the world, including the United States and United Kingdom.

"It has been so gratifying to be a part of this important work and helping reduce barriers to nature access," Lem said. "I think we're well on our way to socializing the idea that nature is the fourth pillar of health and making nature prescribing a mainstream idea."

'Within six weeks, the depression had lifted so much'

In 2020, the Vancouver resident visited a doctor to get help for her depression.

"I just said, 'I can't shake this depression. I just feel so like I can't get up from playing spider solitaire,'" Schurman told CNN. "He says, 'I've got just the thing a prescription for you.' Oh, goody, one more pill."

But instead of a pharmaceutical solution, Schurman's doctor prescribed her with nature time -- at least two hours a week, each time a minimum of 20 minutes.

"Within six weeks, the depression had lifted so much...," Schurman said. "We know that there is the science about the impact of being in nature, being with trees, going to hug a tree, you'll feel better. So I supported it wholeheartedly, and I'm an example of how it works."

"If you love something, you want to protect it. They tend to recycle more, they tend to save more electricity and engage in more climate action," Lem said. "So we like to think with our program that every time someone writes a prescription for nature that we're doing our little part for the planet."

As of February 2022, more than 4,000 licensed healthcare professionals, including nurses, doctors and psychologists, had subscribed to the PaRx program. However, due to privacy laws, it's unclear how many nature prescriptions they've written.

The partnership between BC Parks Foundation and Parks Canada Agency will seedoctors prescribe 100 free park passes in its first year. The passes will be prioritized for Canadians living near national sites and those who doctors believe need them most, Parks Canada spokesperson Megan Hope told CNN.

"This partnering initiative will support the health and wellness of Canadians, increase their connection to nature and improve accessibility to natural heritage places," Hope said, adding that the number of passes provided "will be reassessed in the following years."

PaRX has alreadychanged the way many Canadian medical professionals and their patients think about nature, Lem said. But the program still has a long way to go.

"When medical schools start teaching nature, prescribing and recommending nature as just important as a healthy diet and lifestyle, I'll know we're getting there," she said.