Canada's Trudeau announces bill to cap sales, transfers and imports of all handguns in the country 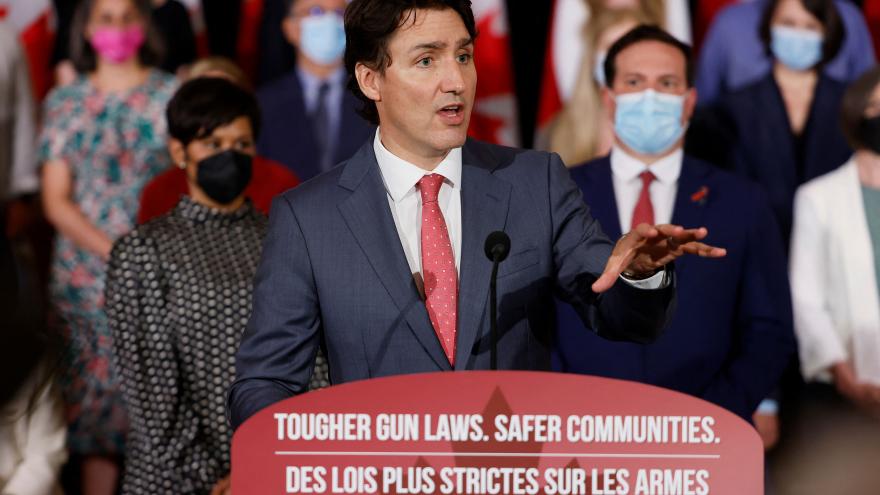 (CNN) -- Canadian Prime Minister Justin Trudeau on Monday announced the introduction of a bill that would place a national freeze on handgun ownership across Canada.

"What this means is that it will no longer be possible to buy, sell, transfer or import handguns anywhere in Canada," Trudeau said in a news conference.

"In other words we're capping the market," he added.

"Gun violence is a complex problem, but at the end of the day the math is really quite simple: The fewer the guns in our communities, the safer everyone will be," the Prime Minister said.

Trudeau added that while most gun owners use their handguns safely and in accordance with the law, "we don't need assault style weapons that were designed to kill the largest number of people in the shortest amount of time."

The announcement comes in the wake of two recent mass shootings in the United States. On May 24, a gunman entered an elementary school in Uvalde, Texas, and fired more than 100 bullets, killing 19 children and two teachers. On May 14, 10 people were killed in a racist mass shooting at a supermarket in Buffalo, New York.

Ending gun violence was part of Trudeau's campaign in the country's 2019 election. In 2020, his government banned more than 1,500 types of military-style assault weapons just after Canada's deadliest gun rampage in its modern history.

Handguns were "the most serious weapon present in the majority of firearm-related violent crimes" between 2009 and 2020, making up 59% of those crimes, according to a Monday release from Trudeau's office.

The number of registered handguns in the country increased 71% between 2010 and 2020 to about 1.1 million, according to the release.