Can Trump legally deploy US troops to US cities? 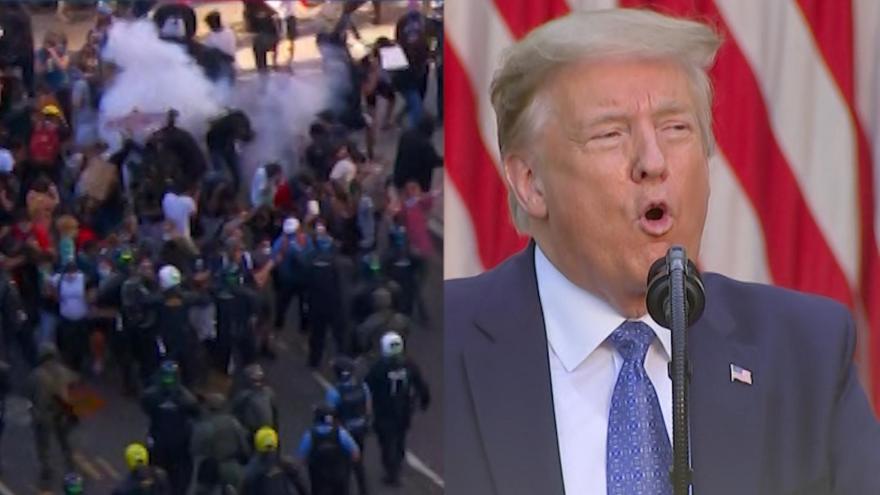 President Donald Trump threatened to invoke the Insurrection Act of 1807 law and take the unusual step of deploying active duty US soldiers to police US streets.

(CNN) -- President Donald Trump threatened Monday night to invoke the Insurrection Act of 1807 law and take the unusual step of deploying active duty US soldiers to police US streets.

While Trump claims the move would break up anti-fascists, or Antifa, who he says are organizing violent riots that have led to looting, it would also effectively squelch peaceful protests for racial justice after the death last week of a black man, George Floyd, after a police officer used lethal force during a stop.

That would be a remarkable turn on the law, which was most notably used in the 1950s to enforce desegregation. And later, in the 1960s, to address riots in Detroit.

According to the Congressional Research Service, it hasn't been invoked since 1992 during the riots in Los Angeles that followed the acquittal of four white police officers in the beating of Rodney King. Now-Attorney General William Barr was actually attorney general back then, too, under former President George H.W. Bush.

Congress amended the law after Hurricane Katrina in 2006 to give more clarity about its use during natural disasters, but dropped some of those changes a year later after objections by state governors who did not want to cede their authority.

But Trump said Monday that if governors did not act to his liking, he would call up the military.

"If the city or state refuses to take the actions that are necessary to defend the life and property of their residence, then I will deploy the United States military and quickly solve the problem for them," he said.

But there may be curbs on what Trump can do. One section of the law suggests that states must first request help, but other portions of the Insurrection Act do not require a governor or state legislature's okay, such as when the President determines the situation in a state makes it impossible to enforce US laws or when citizens' rights are abridged.

"Historically and practically, such a request is not necessarily a prerequisite to the President using regular federal troops for domestic law enforcement," said Stephen Vladeck, a University of Texas law professor and CNN contributor.

There are examples of presidents using troops over the objections of governors, as Dwight Eisenhower (and later John F. Kennedy and Lyndon B. Johnson) during the Civil Rights era. In particular, Eisenhower invoked the Insurrection Act when he federalized the Arkansas National Guard and then sent the 101st Airborne Division into Little Rock to integrate the schools.

That use may have been on the mind of Sen. Tom Cotton, the Arkansas Republican, when he suggested on Twitter that Trump employ the 101st Airborne Division.

Governors were quick to dispute Trump, as J.B. Pritzker of Illinois did on CNN shortly after Trump's comments.

"I reject the notion that the federal government can send troops into the state of Illinois," said Pritzker, a Democrat. "The fact is that the president has created an incendiary moment here. He wants to change the subject from his failure over coronavirus, a miserable failure and now see a moment when there's unrest because of the injustice that was done to George Floyd that he now wants to create another topic and something where he can be the law and order president."

A separate law, the Posse Comitatus Act -- read a long description of it here -- does seek to prohibit the use of the military to enforce laws unless expressly authorized by Congress or the Constitution. But there are exceptions in that law for insurrection of rebellion and, after the Patriot Act, for terrorism. So it may be notable that Trump keeps referring to rioters as terrorists.

Regardless, there seems to be ample legal footing for Trump to deploy the military if he chooses to.