Can the world's largest plane ever fly again? 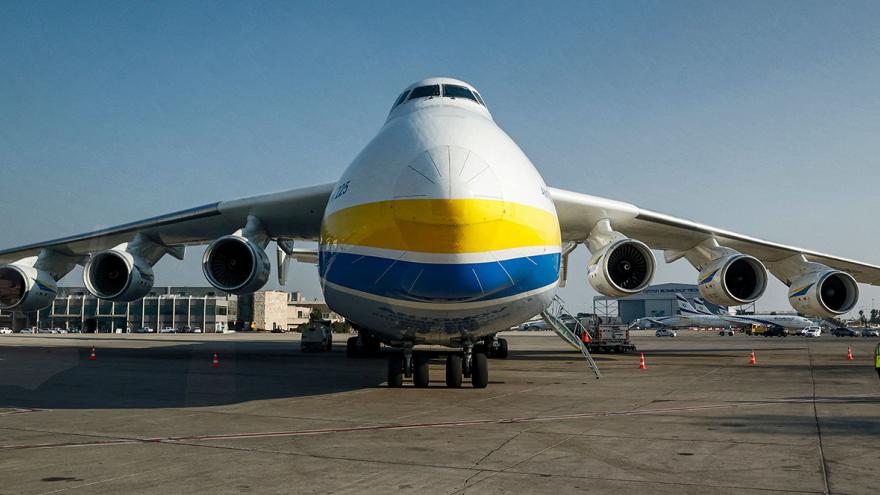 (CNN) -- The images of the wrecked Antonov AN-225 are now an indelible memory for aviation enthusiasts worldwide.

Built in the 1980s to ferry the Soviet space shuttle, the plane got a second life after the Cold War as the world's largest cargo transporter, achieving records of all kinds, before being destroyed at the end of February at its home base, Hostomel airfield near Kyiv.

"The dream will never die," tweeted the Antonov company, in reference to the plane's nickname "Mriya," meaning dream in Ukrainian. Solidarity poured in from every corner of the world.

Answering that question firstly requires an assessment of the damage sustained by the aircraft.

CNN's Vasco Cotovio has seen the wreckage up close, when he visited Hostomel airfield in early April, along with other CNN journalists and the Ukrainian National Police.

"Hostomel was the scene of intense fighting between Russian and Ukrainian forces since very early in the war," he says.

"Moscow's forces tried to seize the airfield to use it as a forward operating position to which they could fly in additional land units. To do that, they mounted an air assault with attack helicopters.

"They seemed to have had some initial success, but the Ukrainian response was very quick, hitting the airfield fast and strong -- to prevent any sort of landing," he says.

The condition of the plane left no doubts regarding the possibility of a repair.

"The nose of the plane was completely destroyed, seemingly the victim of a direct artillery hit," Cotovio says. "In addition to that, there was extensive damage to the wings and some of the engines. The tail end section was spared from any large impacts and has a few holes caused by either shrapnel or bullets.

"Had it not been for the direct hit on the nose, the AN-225 might have been repairable," he says, adding that the area surrounding the plane was littered with spent ammunition, obliterated Russian tanks and trucks and destroyed armored vehicles.

Andrii Sovenko, a Kyiv-based engineer and aviation expert who has worked for the Antonov Company since 1987 and has flown on the AN-225 as part of its technical crew, has compiled a detailed list of the damage, by looking at a large number of videos and pictures of the wreckage (Antonov personnel are not yet allowed back at Hostomel due to safety concerns).

He confirms that the center section of the fuselage and the nose of the plane -- including the cockpit and the crew rest compartments -- are destroyed, but it's the plane's onboard systems and equipment that received the most critical damage.

"Restoring them will be the hardest," he says. "This is due to the fact that most of the various electrical systems, pumps and filters used on the AN-225 are all from the 1980s.

"They are simply no longer being made, so it's unlikely that they can be restored exactly in the way they were," he says.

It's not all bad news: portions of the wings, including aerodynamic surfaces such as flaps and ailerons, appear to have suffered minor damage, and they could be salvageable.

Most of the six engines also seem intact, and the whole tail section of the plane is affected just by shrapnel damage, leaving it in acceptable condition.

Sovenko, who wrote a book about the history of Antonov Airlines detailing his experience of flying on the Mriya, concurs that the plane at Hostomel can't be repaired.

He refers to the second AN-225 airframe that Antonov has preserved to this day in a large workshop in Kyiv. It was part of an original plan to build two AN-225s, which never panned out.

"This is a completely finished fuselage, with a new center section already installed on it, as well as the load-carrying structure of the wings and the tail unit. In other words, almost a complete airframe. As far as I know, it was practically undamaged during the Russian artillery bombardment of the plant," says Sovenko.

There is one main problem with the idea of building out the unused airframe with salvageable parts from Hostomel: it still won't amount to 100% of the necessary components.

"It will be impossible to build exactly the same aircraft, with the exact same design and equipment," Sovenko says. If that is the case, Antonov faces two hurdles: making new and old components work together and potentially having to go through re-certification of the aircraft, to confirm its airworthiness and compliance with current regulations.

The company has experience with the first issue, having updated many of the AN-225's systems over the years and replacing the old Soviet tech with modern Ukrainian equivalents, but a full certification would require time and increase costs.

Unfortunately, that appears to be almost inevitable: "It's pointless to build an aircraft today with a 40-year-old design," Sovenko adds. "It's also quite possible that it will be considered appropriate to make additional changes to the aircraft design, based on the operating experience of the original."

The AN-225 was never designed to carry commercial cargo, and it was adapted for the job via extensive work performed by Antonov in the late 1990s. Nevertheless, despite its colossal capacity, the plane remained inconvenient to operate from the point of view of the crew. It has to be lowered on its nose -- a maneuver known as the "elephant kneel" -- to load cargo, which is rolled onboard using custom tracks and pulleys.

Because of its unique design, only the nose of the plane opens, and it doesn't have a ramp at the back like its more practical smaller brother, the AN-124. The cargo floor could also use some reinforcement and the degree of compliance of the aircraft with existing airport infrastructure could be increased, adding to the list of desirable improvements in a hypothetical modern version of the aircraft.

Building out a second Myria won't be cheap, but it's hard to establish exactly how much it would cost. Ukrinform, the Ukrainian national news agency, raised eyebrows when it declared that the cost of the operation would be $3 billion. In 2018, Antonov estimated that the completion of the second airframe would cost up to $350 million, although that figure might need to be revised up now.

"Nothing is known for certain at the moment," says Sovenko, "The cost will depend on how badly damaged the surviving parts of the aircraft are, as well as how many modifications and new equipment will be required. A large portion of the costs will depend on the amount of certification testing deemed necessary. But in any case, we can guess that the final amount will be in the order of hundreds of millions of dollars, not billions."

Richard Aboulafia, an aviation analyst at Aerodynamic Advisory, agrees: "It depends on whether the plane would be merely a prototype, or if they would want it to enter commercial service, with full certification. Certainly $500 million or so is more reasonable, even with certification, than $3 billion."

The real question, Aboulafia says, is who would pay for it? "There's really not much of a commercial application for this plane, and without that, where would the money come from?"

It's easy to think that most of the costs would be sustained by Antonov, but the company has suffered major losses through the destruction of several other aircraft and facilities; although it's still operating at a reduced level, its future is uncertain.

"I am an optimist. I sincerely and deeply wish that Antonov aircraft will continue to fly in the skies of the future," says Sovenko, "but I'm also a realist. And I fully understand that the costs necessary to build the second Mriya will have to be correlated with the financial capabilities of Antonov after the war, as well as with the expected income from the operation of this aircraft."