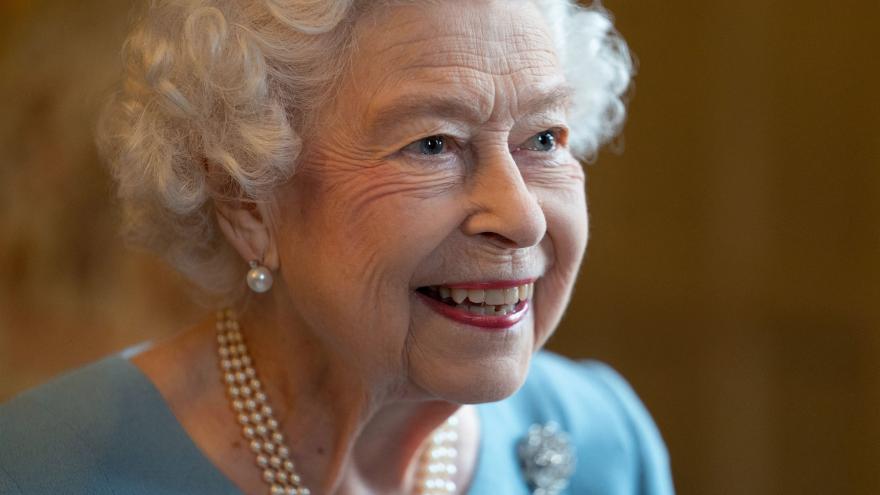 (CNN) -- Britain's Queen Elizabeth II has used the historic milestone of her Platinum Jubilee to redefine the future of the monarchy, calling for the Duchess of Cornwall to be known as Queen Camilla when Charles becomes King.

When Charles married Camilla in 2005, the couple announced she intended to be known as "Princess Consort" despite having a right to the title of Queen. It was seen as a recognition of the sensitivities around a title that was destined for Charles' first wife, Diana.

It's the same reason Camilla doesn't use the title of Princess of Wales.

The Queen would be expected to consult her direct heirs Charles and William before making such a significant announcement about titles, which suggests they both agreed and felt the British public is ready to accept Camilla as Queen.

The 95-year-old monarch laid out her vision for institution's transition in an extraordinary message released as she reached the 70th anniversary of her accession to the throne.

"I would like to express my thanks to you all for your support. I remain eternally grateful for, and humbled by, the loyalty and affection that you continue to give me," the Queen said.

"And when, in the fullness of time, my son Charles becomes King, I know you will give him and his wife Camilla the same support that you have given me; and it is my sincere wish that, when that time comes, Camilla will be known as Queen Consort as she continues her own loyal service."

It's a hugely significant intervention from the monarch, who is the only person who can define royal titles.

Camilla became something of a public pariah following the breakdown of Charles and Diana's union in the mid-90s.

Diana had blamed Camilla for ruining her marriage, saying in a 1995 television interview, "There were three of us in this marriage, so it was a bit crowded." A year earlier, Charles had also appeared on television and confessed his infidelity, but maintained he had only been unfaithful once his marriage had crumbled.

Positive public sentiment for the Princess of Wales was only further cemented when she was killed in a Paris car crash in 1997.

In the intervening years, Camilla retreated to the shadows, supporting Charles quietly from a distance.

But as time has gone by, sentiment toward the Duchess of Cornwall has softened. And the Queen's moves to future-proof the monarchy reflects Camilla is no longer viewed as the royal mistress but a central figure in "the firm."

On Saturday, Prince Charles and Camilla announced they were "touched and honoured by Her Majesty's words" according to a spokesperson.

Elizabeth ascended to the throne on February 6, 1952, following the death of her father, King George VI, at the age of 56.

Throughout her reign, Elizabeth has often used landmark moments to reaffirm her devotion to her duties, and did so once more in her message on Saturday, despite the fact she is nearing her 96th birthday.

"As we mark this anniversary, it gives me pleasure to renew to you the pledge I gave in 1947 that my life will always be devoted to your service," she said.

The Queen also expressed "a sense of hope and optimism" for the year ahead, before conveying her gratitude to her family for their support and paying tribute to her late husband, the Duke of Edinburgh.

"I was blessed that in Prince Philip I had a partner willing to carry out the role of consort and unselfishly make the sacrifices that go with it. It is a role I saw my own mother perform during my father's reign," she shared.

The monarch ended her message by restating she looked forward "to continuing to serve you with all my heart" and shared her hope her jubilee would provide an opportunity for people to come together after the difficulties of recent years.

Traditionally, the Queen marks her Accession Day at her countryside retreat of Sandringham in Norfolk, about 100 miles north of London. It's a chance for her to reflect upon the death of her father away from the glare of the public. In keeping with previous years, no public engagements are expected on Sunday.

The nation will have the chance to honor the monarch's historic reign in a series of jubilee-themed festivities set to take place throughout the year, culminating in a blockbuster, four-day public holiday in June.

Over the long weekend, beacons will be lit across the United Kingdom; Buckingham Palace will host a music concert; street parties are being encouraged; and a pageant will bring together more than 5,000 personnel, performers, key workers and volunteers from the UK and the Commonwealth.

However, the Queen did host a special reception earlier Saturday for some Sandringham community members on the eve of her Platinum Jubilee.

She welcomed pensioners and representatives from several local charities to the Sandringham House ballroom to celebrate her historic milestone with cake.

One of those in attendance was former cookery student Angela Wood, who helped develop a recipe intrinsically linked to the start of her reign -- Coronation Chicken, a dish of cold chicken in a curry cream sauce served with a side salad.

The Queen appeared to be in great spirits during the engagement, according to Britain's PA Media news agency. She held a wooden walking stick and carried her trademark black handbag as she made her way around the room, joking and laughing with guests.

It was the largest gathering the sovereign has attended since October, when she hosted a reception to mark the Global Investment Summit at Windsor Castle.

Sign up for CNN's Royal News, a weekly dispatch bringing you the inside track on the royal family, what they are up to in public and what's happening behind palace walls.