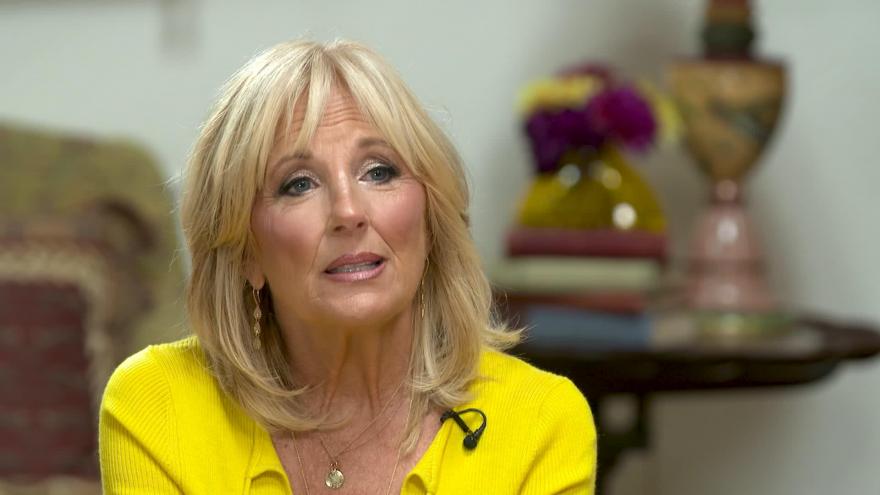 Jill Biden, the wife of Democratic presidential nominee Joe Biden, said her husband is "ready" to face Donald Trump in the first presidential debate this week.

(CNN) -- Jill Biden, the wife of Democratic presidential nominee Joe Biden, said her husband is "ready" to face Donald Trump in the first presidential debate this week and accused the President of trying to distract with smears during the tense campaign.

"He's ready. One of the things I'm excited for is when the American people see Joe Biden up there on that stage," Jill Biden told CNN's Jake Tapper in a one-on-one interview that aired Sunday on "State of the Union." "They're going to see what a president looks like. You know, someone who is, like I'm saying, calm, steady, strong, resilient."

Biden, who sat with Tapper for an interview Thursday at Hampton Roads, Virginia, said it's "night and day between the two candidates," who will face off for the first time Tuesday in Cleveland.

Both campaigns have been quiet about how the candidates are preparing for the debate, which will be 90 minutes and focus on six topics, including the coronavirus pandemic and the Supreme Court.

Bob Bauer, a senior adviser to the Biden campaign and former White House counsel in the Obama administration, has played Trump in a mock debate session Biden has held ahead of Tuesday night's debate, a source familiar with the preparations confirms.

Trump, according to a source familiar with his debate preparations, is studying expected attacks from Biden.

The former second lady defended her husband against the false accusations Trump has promoted on his Twitter feed, calling the smears a "distraction."

"Donald Trump looks at Joe and says, 'Oh my God, you know like, there's my competition, what can I think up to distract people?' And that's all he's trying to do, but Joe's tough," she said.

"This is Donald Trump's America. This is the chaos and, you know, just going off the cuff with this comment or that comment. No, we go back to Joe Biden. We have calm, we have steady leadership, we don't have all this chaos in America," she said.

She was also asked about the recent endorsement of Joe Biden from Cindy McCain, the widow of the late Republican Sen. John McCain -- who Trump has attacked even after his passing.

Jill Biden told Tapper that it "took a lot of courage" for Cindy McCain to support her husband since she is part of the Republican Party.

"Joe and John would argue about issues and they would see things totally differently. But at the end of the day, there we would be together having dinner or going on a trip together or whatever it was," Jill Biden said of her family and the McCains.

"I mean there was true civility in government. And that's what I think we should return to," she added.