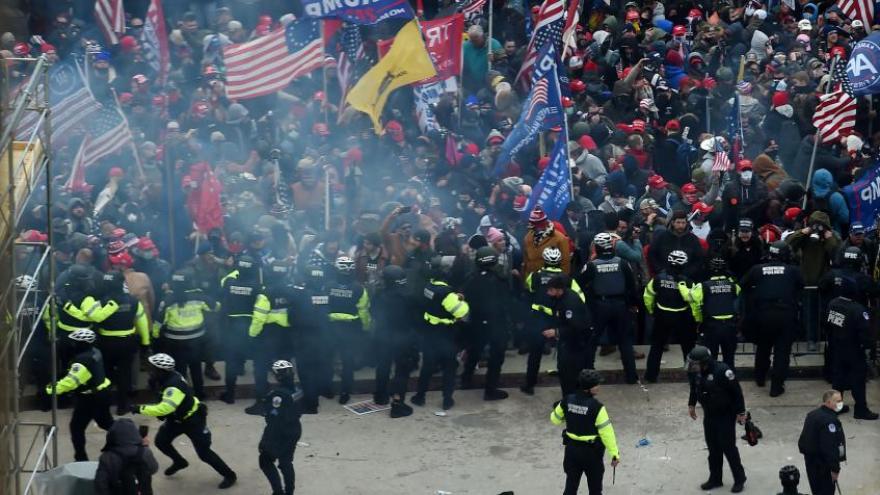 Police hold back supporters of former President Donald Trump as they gather outside the US Capitol's Rotunda on January 6, in Washington, DC.

(CNN) -- Online extremist rhetoric is strikingly similar to the buildup to the January 6 attack on the US Capitol, with increasing calls for violence linked to conspiracy theories and false narratives, Homeland Security Intelligence chief John Cohen said in an interview with CNN.

There have been online comments such as "the system is broken," "take action into their own hands" and "bring out the gallows," Cohen said, offering as paraphrases of what has been observed.

While the conspiracy theories vary, there has been an ongoing narrative focused on the false premise that the presidential election was illegitimate, Cohen said. That narrative is paired with an increase in calls for violence to rectify the situation.

His comments come as the Department of Homeland Security issued a new terrorism bulletin warning the public about increasingly complex and volatile threats and days after DHS alerted state and local authorities to an increase in calls for violence online tied to election-related conspiracy theories.

"It's very similar to the stuff we saw prior to January 6," said Cohen, the DHS Office of Intelligence and Analysis senior official performing the duties of the under secretary. But the comments have stopped short of specific dates and threats, he noted.

Several swirling conspiracy theories point to a process that will change the results of the election.

"Concern from a law enforcement perspective is at a certain point in time, all of the conspiracy theories that point to a change occurring through process are going to sort of wear out. And the question is going to be, are people going to try to resort to violence, in or in furtherance of, that false narrative?" Cohen said.

The terrorism bulletins allow DHS to provide the American public with an understanding of current threats to the US, replacing the post-9/11 color-coded terrorism warnings.

There is a diverse set of potential threats, according to the new bulletin, including from domestic terrorists and those inspired or motivated by foreign terrorists.

"These actors are increasingly exploiting online forums to influence and spread violent extremist narratives and promote violent activity," it reads.

Threats are exacerbated by impacts of the coronavirus pandemic, the bulletin says, including "grievances over public health safety measures and perceived government restrictions."

According to the bulletin, the reopening of institutions, including schools, as well as several dates of religious significance over the next few months "could also provide increased targets of opportunity for violence."

Law enforcement has expressed concerns that the broader sharing of false narratives and conspiracy theories will gain traction in mainstream environments, resulting in violence, according to the bulletin.

Homeland Security Secretary Alejandro Mayorkas said Friday, in a separate interview on CNN, "We are seeing expressions of violent extremism, born of false ideologies, false narratives, ideologies of hate. And we are seeing the potential connectivity to violence, which is where we step in," adding that these threats prompted the department to renew the terrorism alert.

He urged the American public to stay vigilant and if anyone sees something of great concern, from a public safety perspective, to report it to local authorities or the federal government.

The bulletin is part of a concerted effort by DHS to address the issues that led up to January 6 and the beginning of an effort by the department to educate the public about how these false narratives and conspiracy theories "are not just confusing but dangerous," according to a source familiar.

Part of what is fueling the current threat is that foreign and domestic threat actors -- specifically foreign intelligence services, international terrorist organizations and domestic extremist thought leaders -- use online platforms to spread disinformation and conspiracy theories for the express purpose of trying to sow discord and incite violence, Cohen told CNN.

DHS continues to be "very concerned" that people inspired by what they see online will engage in violent activity in furtherance of these online narratives, he added.

Foreign nation-states have focused on sowing discord related to resurgence of Covid-19 around the idea that public health restrictions are somehow an infringement on one's freedom, or calling into question the US government's response to the pandemic, he said.

"What we're seeing -- mainly from China, Russia and Iran -- currently is a lot of focus on the Covid issue," Cohen added.

According to Thomas Warrick, senior fellow and director of the Future of DHS Project at the Atlantic Council think tank, Cohen's warning "needs to be taken especially seriously."

DHS is in the unique position of being able to receive what other law enforcement organizations are seeing and put together the big picture, he said in a statement to CNN.

Warrick noted that the threat from domestic terrorist groups that are spreading racially or ethnically motivated violence and anti-government violent extremism is still strong -- even with the efforts by the FBI, DHS and law enforcement to crack down on those responsible.

"As we approach the twentieth anniversary of 9/11 and a series of anniversaries of domestic terrorist attacks over the following weeks, we need to ask what it will take to defeat this latest wave of domestic terrorism that led to the January 6 attack on the US Capitol, the 2020 threat against the governor of Michigan, and threats against state and local election officials," he said.

The current threat environment has prompted a flurry of effort to prevent a deadly or destructive incident from occurring, according to Cohen, who also serves as the DHS coordinator for counterterrorism.

He is the first political appointee to lead the office since spring 2020.

After months of strife under the Trump administration, the intelligence office is pivoting to embrace its unique role in the intelligence community and learn from the shortfalls of January 6.

The Intelligence and Analysis Office, which was entangled in a series of public controversies in the final year of the Trump administration, is pushing to revamp its analytic products and to better engage with state and local law enforcement, Cohen told CNN.

Last summer, the office came under scrutiny after it was revealed that it had compiled "intelligence reports" about the work of two US journalists covering protests in Portland, Oregon.

That set off a series of reassignments and investigations into the office.

Most recently, the office was faulted for not producing a bulletin or warning about the potential for violence at the US Capitol on January 6.

The attack that unfolded on the US Capitol was a "stark illustration" of the need to gather and evaluate threats of violence online, Cohen said.

A significant part of the current threat environment comes from individuals who are influenced by what they see online, he said.

According to Cohen, the tendency in the past, particularly when looking at al Qaeda and other foreign terrorist threats, was to place a higher emphasis on information collected through covert means, specific to a credible plot.

This story has been updated with more details and further developments Friday.?