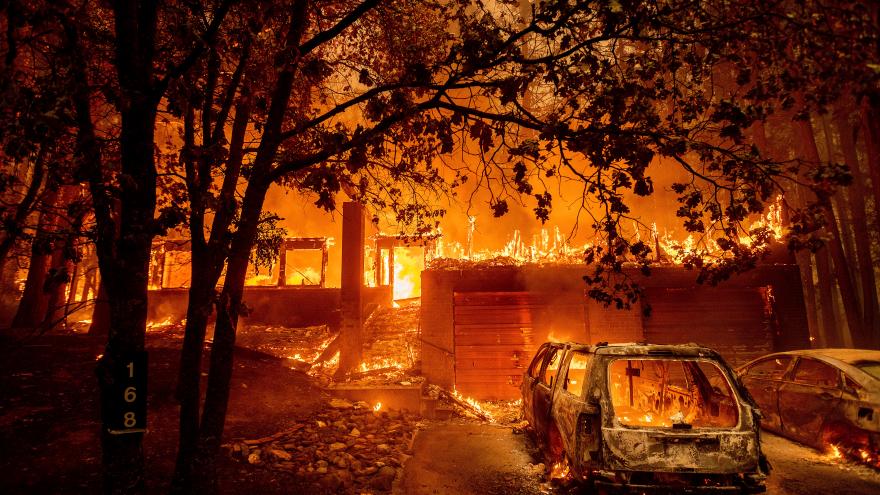 (CNN) -- California's largest wildfire has destroyed multiple buildings and is threatening thousands more as the battle against the blaze stretched into its 12th day. Low moisture in vegetation and limited access in the remote area have hampered firefighters, officials said.

The Dixie Fire had grown to 190,625 acres and was 21% contained as of Sunday morning, according to Cal Fire, with more than 5,000 firefighters and personnel fighting the fire.

The fire, which began July 14, has destroyed 16 structures -- residential, commercial and otherwise -- Cal Fire officials said in an update Sunday. More than 10,700 structures in Butte and Plumas Counties are threatened.

The Dixie Fire remained active overnight, officials said. It "continues to burn in a remote area with limited access, and extended travel times with steep terrain are hampering control efforts."

The fire crossed Highway 70 and Highway 89 on Saturday, forcing firefighters to protect the communities of Paxton and Indian Falls. Officials said a damage assessment team will survey the extent of structure damage once conditions are safer.

The Dixie Fire has forced numerous evacuation orders, including along the west shore of Lake Almanor in Plumas County.

Cindy Pierson, a resident of Quincy who's been forced to evacuate, told CNN affiliate KCRA she was "very anxious" about the wildfire.

"It's scary," said Pierson. She told the station she'd lived in Quincy for just three months. "I've never been through anything like this."

"I want to come home as soon as possible, and I want there to be a home," she said.

Another resident, Henry Riel, said the fires meant residents had to be ever-vigilant, prepared to leave at a moment's notice.

"You pray that the wind goes the right way," he said. "But when it turns you've just got to be prepared to move and get ready to go."

The declaration included Alpine, Lassen, Plumas and Butte counties, the latter of which was the site of the state's deadliest and most destructive wildfire in California history in 2018.

The blaze is just one of 86 large wildfires -- many of them in the West -- burning more than 1.4 million acres across the country, according to the National Interagency Fire Center.

The Tamarack Fire is burning along the state's border with Nevada and has scorched more than 66,000 acres, per InciWeb, a clearinghouse for wildfire information in the US. It's 27% contained.

On Sunday, officials announced the sheriff's offices of Alpine and El Dorado Counties would begin escorting evacuated residents back into the area to retrieve pets and important papers, depending on the fire's activity.