California's Bond Fire has burned more than 7,000 acres and more fire warnings are ahead 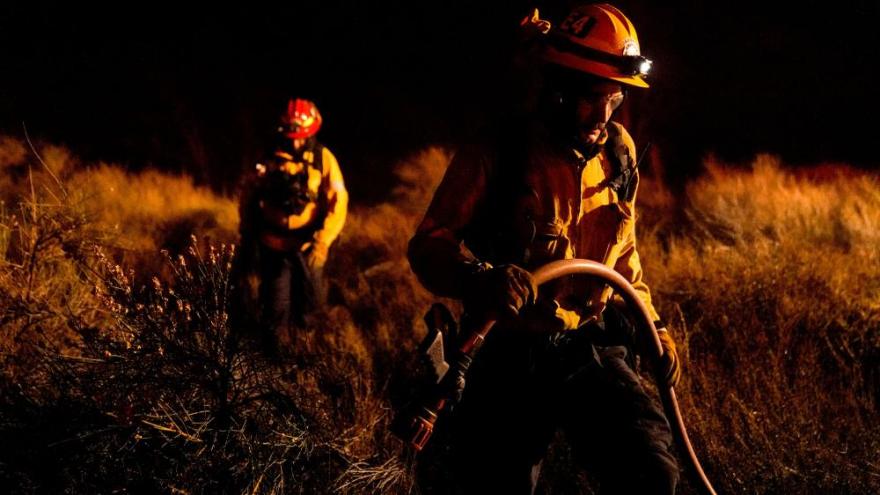 Firefighters battle the Bond Fire, started by a structure fire that extended into nearby vegetation, along Silverado Canyon Road on Thursday, Dec. 3 in Silverado, CA.

(CNN) -- A fast-moving wildfire that began late Wednesday in Southern California is 50% contained as of Sunday morning, a slight increase from the day earlier, according to the Orange County Fire Authority.

The Bond Fire has burned 7,375 acres, destroyed 28 structures, damaged 19 others and caused thousands to evacuate since it began in Orange County's Silverado Canyon, according to CalFire.

Mandatory evacuations are still in place in Silverado Canyon, Black Star and the adjacent Baker Canyon, Williams Canyon and Modjeska Canyon, according to the Orange County Sheriff's Department. At least 25,000 residents were initially evacuated due to the fire and two firefighters have been injured battling the blaze.

The fire rapidly spread early Thursday with much of California under extreme fire warnings, as hurricane-force winds, a dry landscape and scorching temperatures set the stage for blazes.

Milder wind conditions overnight allowed firefighters to construct and reinforce fire lines to increase the containment of the fire by 10% from Saturday, according to CalFire.

But the fire's threat is not over. The coming days are expected to be dry, with low humidity and the potential for gusty winds, CalFire said. Moderate Santa Ana winds -- the name for the area's strong, hot winds that can dry vegetation and further spread wildfires -- are expected to return Monday and Tuesday, bringing a red flag warning that goes into effect Monday morning, CalFire said.

This year's extreme conditions have tested the limits of fire authorities, who have now battled five of the six largest wildfires in California state history, and for the millions of residents who have endured them.

California's wildfire season typically runs from July through November. But officials warn that the current weather pattern is the spitting image of the weather that helped fuel the wildfires that scorched millions of acres this summer and are urging residents to stay vigilant over the coming days.