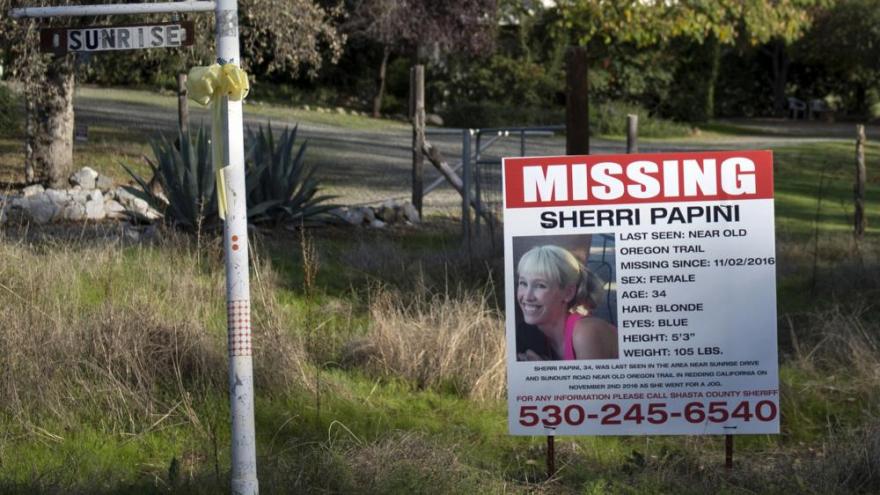 The November 2016 disappearance of Sherri Papini led to a massive search for her whereabouts in California.

(CNN) -- Sherri Papini, the Northern California woman accused of faking her own kidnapping in 2016, was driven by her own "narcissistic behavior" in the hoax, Shasta County Sheriff Michael Johnson told "Good Morning America" on Monday.

"It is a case of calculated deception driven, I think, by her narcissistic behavior, and it really had an impact on this community and nationwide as far as that goes," Johnson said on the ABC program.

The comments came days after Papini was arrested and charged with making false statements to a federal law enforcement officer and mail fraud, the Department of Justice said in a news release. Further details included in an affidavit illuminate how an ex-boyfriend helped her in the hoax and then kept silent for years, until authorities finally tracked him down in August 2020.

The incident dates to November 2, 2016, when Papini was reported missing by her husband Keith Papini after she had gone out for a jog near her house in Shasta County. Three weeks later, on Thanksgiving Day, she was found alone on Interstate 5 about 140 miles from home.

She told police she he had been abducted and branded by two women who kept her chained in a closet. She gave an elaborate story of her kidnapping and treatment at the hands of the supposed assailants, whom she said wore masks, spoke Spanish, held her at gunpoint and branded her with a heated tool.

However, the Department of Justice said last week Papini had actually stayed with an ex-boyfriend in Southern California for those three weeks. She caused her own injuries to support her fictional story, authorities said. She received over $30,000 in fraudulent victim assistance money based on the hoax, according to the affidavit.

Her disappearance and resulting story about her abduction led authorities to use large resources to try to solve the case. Speaking to GMA, Johnson lamented the time, effort and money devoted to what they now allege was a hoax.

"Human trafficking is a real thing and there are victims out there that need our help. Investigations are complex and budgets are tight, so when we put all that effort into such a case and find out that things are not what they seem and we've been deceived and law enforcement has been duped, it's really taxing on everybody," he said.

Papini's claims she was kidnapped by women who wore masks and spoke Spanish created particular anxiety in the Hispanic community, Johnson said.

"You have a story of a typical American mom who was just abducted by what seemingly is a cartel-type of human trafficking operation, which is just not true," said Johnson. "That disrupted a lot of things for a lot of people around here."

Papini, 39, was arrested Thursday and made her initial appearance in court Friday. She was ordered detained as a danger and flight risk until Tuesday for a detention hearing to determine her custody status, according to Lauren Horwood, a spokesperson for the US Attorney's Office of the Eastern District of California.

Papini was represented by attorney Michael Borges, Horwood said. Borges has not responded to multiple requests from CNN for comment.

Chris Thomas, a spokesperson for Papini, her husband and her family, criticized police for her arrest, which he said occurred in front of her children.

"Sherri and Keith have cooperated with law enforcement's requests despite repeated attempts to unnecessarily pit them against each other, empty threats to publicly embarrass them and other conduct that was less than professional," Thomas said. "We are confused by several aspects of the charges and hope to get clarification in the coming days."

A 55-page affidavit in support of her criminal complaint and arrest warrant helps explain how investigators determined that Papini's story was fabricated, focusing in on startling admissions from an unnamed ex-boyfriend.

During her disappearance, she did not leave his residence, the affidavit states. Papini also chopped off her own hair, tried to lose weight by eating little and injured herself while staying at his place, he told investigators. The former boyfriend said he did not directly hit her but did help her create some of the injuries, the affidavit states.

"There's not too many people that come up and say, hurt me. I'm not physical ever with women. I mean, I just don't," he said.

He told investigators he bought a wood-burning tool from Hobby Lobby and burned a phrase she requested into her skin, the affidavit states.

Yet the set-up did not last long. Shortly before Thanksgiving 2016, Papini said she missed her children and asked to be taken back to her home, the affidavit states. He then drove her for seven hours back to Northern California, dropping her off on a country road off of the freeway, according to the affidavit.

The former boyfriend told investigators he was "rattled" by the experience and concerned about what his involvement could mean for him, the affidavit states. At the time, he believed he was helping out a friend and did not realize he could get in trouble until her story reached the national news, the affidavit states. Still, he did not speak up to authorities.

"I'm not going to make any calls because it's like I'm turning myself in for nothing," he said, according to the affidavit. He said he had not talked to Papini since dropping her off in November 2016.

Investigators corroborated the ex-boyfriend's account in numerous ways, including from telephone records, his work schedule, rental car receipts, odometer records, toll records, and an interview with his cousin, who saw Papini in the home.

Three days after the interview with the ex-boyfriend, an FBI agent and a Shasta County Sheriff's Office detective confronted Papini with the new information and warned her that lying to authorities is a crime. Still, she stuck to her original story and denied she had seen the former boyfriend, the affidavit states.

"Papini did not at any point throughout the interview disavow her repeated statements that two Hispanic women kidnapped her, nor did she ever admit that Ex-Boyfriend had picked her up and that she had resided at Ex-Boyfriend's home during the period she was reported missing," the affidavit states.

On GMA, Johnson said he will be watching to see if others are charged in the case.

"It's going to go to the grand jury," he said. "They'll dole out the indictments that they feel (are) appropriate but I certainly wouldn't be surprised because she didn't pull it off by herself and there's other people involved."