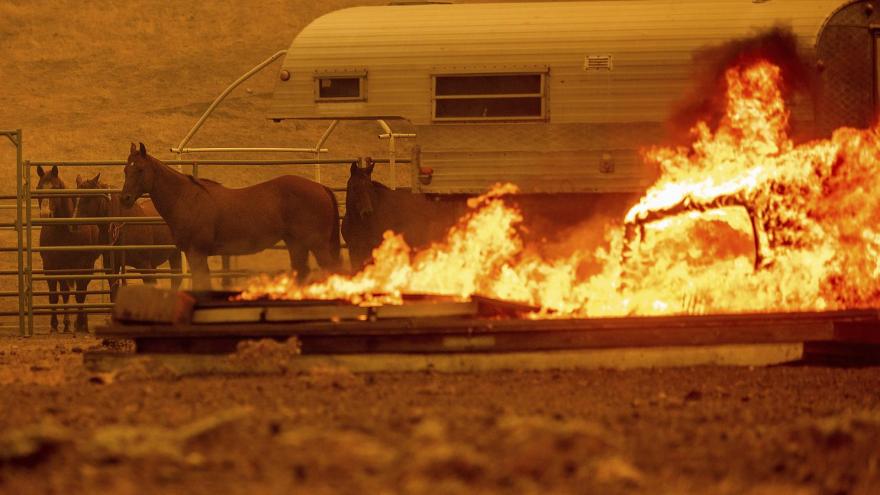 Horses stand in an enclosure as the LNU Lightning Complex fires tear through the Spanish Flat community in unincorporated Napa County, California.

(CNN) -- California, under assault from a record heat wave, is seeing its firefighting crews stretched to the limit as hundreds of blazes scorch swaths of the state.

More than 300,000 acres have burned by fires, one of which authorities suspect was caused by arson. The state, where temperatures in some areas are above 100 degrees, has 23 major fires and a total of about 367.

One firefighter has died. A helicopter pilot, who was dropping water on a blaze, crashed. There was no one else aboard, officials said

One family who lost a home said they were told by a fire chief as they evacuated that there weren't enough trucks to use some in their neighborhood.

Authorities said one man has been arrested on suspicion of arson in connection with one of the fires.

Throughout the state, many people were suffering from the heat and the smoke and tens of thousands of customers were without power.

State getting help from others

People were told to leave parts of the Northern California city of Vacaville as a wildfire tore through the countryside nearby.

Officials are using a senior center as an evacuation center. Layers of ash cover the cars in the parking lot. About 20 or so people are there having fled their homes.

Marci and Ken Albers lost their house in Vacaville.

"(Firefighters) couldn't do anything, they just had to watch it burn," Marci said. "They had no trucks to take out there."

The Albers said the fire chief told them that there were no trucks to battle the blaze because they were all being used to fight the fire in Lake Berryessa.

The Albers evacuated around 2 a.m. with only what they were wearing.

Ken said, "The fire was coming our way, there was nothing I could do."

Marci said they thought the house would make it through the fire.

The state fire agency, Cal Fire, has requested 375 fire engines from out of state to assist in the statewide battle.

Cal Fire spokesman Jeremy Rahn said the hundreds of fires had started over the past 72 hours after 10,849 lightning strikes.

Eleven of the fires Cal Fire was attempting to put out were more than 1,000 acres, according to the agency's website.

And at least 23 major fires were burning across California, Gov. Gavin Newsom said.

Evacuations were ordered in several counties.

"Practically every single first responder unit in town is actively working to safely notify, evacuate and fight the fires, so our residents are safe," police in Vacaville, a city of about 100,000 people between San Francisco and Sacramento, said on Twitter.

Newsom said every firefighting resource is being used but resources are "stretched" throughout the state. The state is also receiving firefighting support from Arizona, Nevada, and Texas.

A firefighting helicopter crashed in the remote area near Coalinga in Fresno County on Wednesday morning, killing the pilot, authorities said. The crash sparked a new wildfire that became part of a bigger blaze.

Around 3 a.m. PT, there were "numerous locations (outside Vacaville) where people (were) trying to get out," and rescuers were trying to reach them, a Solano County sheriff's dispatcher told CNN.

That blaze is part of the LNU Lightning Complex fires, which started Monday and Tuesday in Napa, Sonoma and Solano counties, and have destroyed at least 50 homes, officials said.

California State Parks officials detained a man near the origin of the Dolan Fire in Big Sur and he was booked into Monterey County Jail on suspicion of arson of forest lands, the Monterey County Sheriff's Office said in a statement. The man is being held on $2 million bail.

The fires come during a historic and brutal multiday heat wave, with about 37 million people across the West under an excessive heat warning or heat advisory and temperatures in many places expected to rise above 100 degrees.

Californians are also facing power outages -- both intentional and unintentional -- as the power grid struggles to keep up with demand.

Newsom declared a statewide emergency Tuesday to deploy resources to "combat fires burning across the state which have been exacerbated by the effects of the historic West Coast heat wave and sustained high winds."

He lives elsewhere but bought this property two years ago and was building it up, intending to farm it. The night before, he was there with his wife and two sons watering the land and securing his chickens because he'd seen smoke in the distance.

"We didn't think the fire would come down here this fast," he told CNN. "It's just heart-wrenching. ... It's just gone."

West of Vacaville, fires jumped across some roads, threatening to make passage difficult. In part of neighboring Napa County, video posted by freelance photojournalist Ethan Swope showed flames right up to the edges of Steele Canyon Road as he drove on it Tuesday night. Smoke made it difficult to see more than a few feet ahead.

A photo from the Associated Press showed a mobile home and a vehicle burning in unincorporated Napa County on Tuesday night. Details about how many structures the fire had burned weren't immediately available.

That's about 20 separate blazes burning in steep, rugged terrain, fueled by the extreme heat and low humidity, according to the department. More than 85,000 acres have been charred and two people injured as of Wednesday morning, fire officials said.

In Monterey County, well south of San Jose, evacuations were issued for the Carmel Fire, burning southeast of Carmel Valley Village, CNN affiliate KSBW reported. The Carmel Fire had burned about 1,200 acres and had no containment as of Tuesday night, Cal Fire reported.

The Monterey County Sheriff's Office announced a mandatory evacuation due to a separate blaze, the River Fire. It was 7% contained Tuesday night, according to Cal Fire. Both of the fires are in Monterey County, about 90 miles from San Jose, the department said.

Nearly 36,000 customers were without power across the state, according to the utility tracking website PowerOutage.us.

At least four blazes have already burned more than 150,000 acres.

The largest, the Pine Gulch Fire, became the second-largest fire in state history, according to the Rocky Mountain Area Coordination Center. It had charred through more than 125,000 acres by Wednesday morning, a management tool run by the US Forest Service reported.

Area temperatures are the highest since early August, with thunderstorms and wind gusts of 20 to 30 mph forecast for Wednesday afternoon. Caused by lightning, the Pine Gulch Fire was 7% contained, officials said.

The Grizzly Creek Fire, at about 28,000 acres, was 4% contained Wednesday morning.