California wildfires: 560 blazes have scorched more acres than there are in Rhode Island 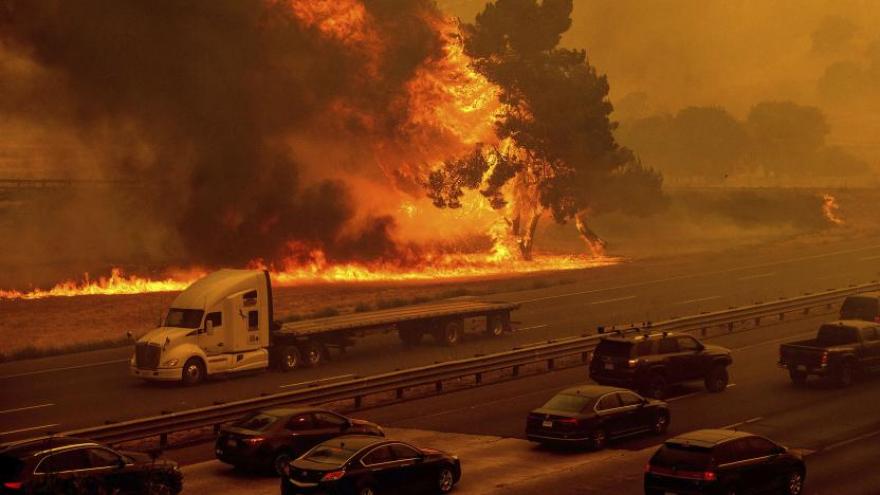 (CNN) -- Almost every firefighting resource in California is battling the hundreds of blazes the include two of the largest wildfires in the state's history, Gov. Gavin Newsom said Friday.

"These fires are stretching our resources and stressing our personnel," the governor told reporters.

The wildfires tormenting California have killed at least four people, turned neighborhoods into ash and blanketed swaths of the state with dense smoke.

About 96% of the state's firefighting engines have been assigned, California Department of Forestry and Fire Protection (Cal Fire) spokesman Jeremy Rahn said.

"I hope for good news, but it's going to take a long time," said Cal Fire Unit Chief Shana Jones. "We are not out of the woods. Not by far."

More than 560 fires have torched at least 771,000 acres -- an area larger than Rhode Island -- with the two largest, the LNU Lightning and SCU Lightning complex wildfires, among the 10 largest recorded wildfires in state history.

The governor said about 119,000 people had evacuated.

Though thousands of firefighters are battling the flames -- some on 24-hour shifts -- there's too many fires and not enough resources to prevent more homes from being torched, fire officials say.

One of the reasons for the lack of resources is there are fewer prison inmates because of early releases during the Covid-19 pandemic.

The early releases have meant there are 600 fewer inmate firefighters available this fire season compared to last year.

The fires, largely sparked by lightning in the past few days, have been exacerbated by dry terrain during a torrid heat wave. And as tens of thousands of people heed evacuation orders, they're weighing the risk of coronavirus infections as they decide whether to head to official shelters.

The LNU fire alone has destroyed about 480 structures, including many homes, in the northern Bay Area and Central Valley, Cal Fire has said.

Just west of Healdsburg, a city of about 11,000 people in Sonoma County, the approaching fire had people rushing to leave with whatever they could carry Thursday night, CNN affiliate KPIX reported.

Jason Passalacqua told the station that he worked all day and night to trim trees and put sprinklers on his home's roof ahead of the fire.

"It's scary at the end of the day and it's out of anybody's control," he told KPIX.

Vacaville, a city of 100,000 people between Sacramento and San Francisco, is one of the hardest-hit. Fire has burned homes in and outside the city, though most evacuation orders there have been lifted.

California wildfires have caused more deaths and destruction so far this year than in all of 2019. All of last year, they charred a total of 260,000 acres and killed three people in the state, according to Cal Fire.

"I lost seven goats, a lamb, about 75 chickens, 20 turkeys, five ducks and a mare -- and a foal did not make it" because fire swept onto the property in Yolo County just outside Winters early Thursday, Petrillo Haefner told the station.

The family fled unharmed in the middle of the night, but not before a close call.

"(My husband) was up on the tractor doing a fire break, and ... a big gust of wind came up, and the fire went literally up and over him," Petrillo Haefner told KCRA.

Several global air quality monitoring websites show that the air quality levels in California's Bay Area and Central Valley are worse than anywhere else, including locations generally regarded as having the poorest air quality such as India and eastern China.

At least four deaths were reported Thursday as a result of the LNU fire -- the largest burning in the state. It consists of at least 11 smaller fires stretching across five counties in Northern California.

Three of the deaths are from Napa County and one is from Solano County. In addition to the deaths, four other people were injured, Cal Fire said Thursday.

On Wednesday, a helicopter pilot who was making water drops on the Hills Fire in Fresno County died in a crash.

Big Basin Redwoods State Park, the oldest state park in California, has been extensively damaged by wildfire, according to the state Parks Department.

All campers, visitors and staff had to be evacuated Tuesday as the CZU Lightning Complex swept through the area known for its daunting groves of redwoods, taking with it not just towering trees, but staff homes and park infrastructure as well.

The damage to the park, which lies southeast of San Jose and north of Santa Cruz, is extensive. The Sempervirens Fund, a non-profit focused on preserving redwood forests in the Santa Cruz mountains, calls the wildfire 'catastrophic.'

About 64,600 people in San Mateo and Santa Cruz counties have been told to evacuate because of the CZU August Lightning Complex Fire south and west of San Jose, according to Cal Fire Deputy Chief Jonathan Cox. That fire has burned 50,000 acres, he said Friday.

"It could be potentially weeks" before evacuees in the Scotts Valley area just north of Santa Cruz city are allowed back on their properties, "depending on what this fire does," chief sheriff's deputy Chris Clark told reporters Friday.

The Scotts Valley flames were not far from the University of California, Santa Cruz, where students were ordered to evacuate Thursday with expectations to "be prepared to not return for at least two weeks," the school said on Twitter.

Somewhere in those two counties, firefighters made three nighttime rescues of people who did not heed evacuation orders, Brunton, the Cal Fire operations section chief, said Friday morning. In some cases, he said, the people may have been trying to keep the fire from their property.

The rescues "pulled our vital, very few resources away, to have to rescue those individuals because they put themselves in peril," Brunton said.

"If you have been (ordered to evacuate), please evacuate. Do not put yourself ... (or) our first responders into that situation," he said.

Fire officials have said they don't have an exact number on how many people have been told to leave their homes statewide.

As if the pandemic, wildfires and scorching heat wave weren't bad enough, some Californians have lost electricity as the state's power grid struggles to keep up with demand.

Rolling blackouts were implemented over the weekend when an intense heat wave caused record-setting temperatures across the state, including a high of 130 degrees in Death Valley on Sunday.

Newsom demanded an investigation into the power outages, which he said are unacceptable.

"These blackouts, which occurred without warning or enough time for preparation, are unacceptable and unbefitting of the nation's largest and most innovative state," Newsom wrote in a letter to the California Public Utilities Commission and the California Energy Commission.

More than 11 million people are under an excessive heat warning in the Southwest, CNN meteorologist Robert Shackelford said. Triple-digit temperatures are possible in all these areas with temperatures still above average, he added.

While the West is suffering record-breaking heat, wildfires are ravaging many parts of the US.

At least 92 large wildfires are burning in 14 states nationwide this week -- many of them in California, according to the National Interagency Fire Center.

The fires have burned a total of 1.2 million acres. Besides California, states with multiple fires include Oregon with 16, Arizona with 11, Alaska with seven, and Colorado with five.