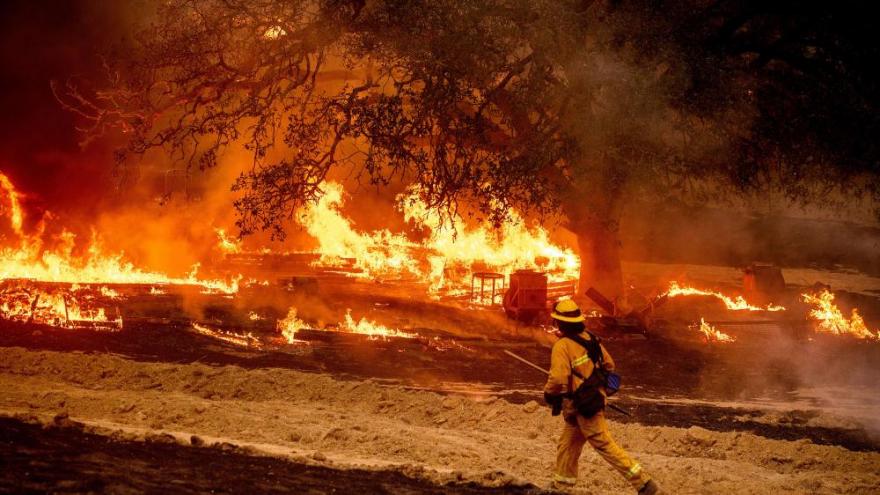 The Glass Fire in wine country has burned 63,885 acres across Napa and Sonoma counties and is 17% contained, according to Cal Fire LNU.

(CNN) -- Wildfires across California have burned a record 4 million acres so far this year, the state's fire agency said Sunday.

That's more than double the previous record set in 2018, according to Cal Fire.

Cal Fire said in a statement that more than 16,500 firefighters are trying to contain 23 major wildfires and responded Saturday to 27 new fires.

Two of those major wildfires have fire crews battling the flames on several fronts.

The Glass Fire in wine country has burned 63,885 acres across Napa and Sonoma counties and is 17% contained, according to Cal Fire LNU.

The deadly Zogg Fire blazing in Shasta and Tehama counties has burned 56,305 acres and is 68% contained as of Sunday morning, according to Cal Fire. Four people have died as a result of the vegetation fire that started September 27. The cause is still under investigation.

The SCU and LNU lightning Complex Fires that are now contained were the third- and fourth-largest wildfires in California's history, charring an area close to the size of Rhode Island. They burned for more than six weeks before firefighters were able to bring them to 100% containment.

Thirty-one people have died so far this year in connection to the fires, more than 8,454 structures have been destroyed and about 100,000 people have had to be evacuated, Cal Fire said.

Some residents say they're devastated and tired from constantly having to deal with wildfires year after year.

"It's like we can't run away," resident Jan Zakin told CNN.

Temperatures will get better going into next week. But no rain is forecast for much of the western half of the country. There is a chance of some rain in the northernmost part of the state at the end of the week. Heat advisories are posted for 25 million people in California, including Los Angeles and San Francisco.

Three-quarters of the West is under drought conditions, and no rainfall is expected until the end of next week, according to CNN meteorologist Robert Shackleford.

The Glass Fire has destroyed 826 structures, according to Cal Fire.

More than 2,600 personnel are battling the wildfire that started September 27. The cause is still under investigation.

Sonoma County Supervisor Susan Gorin expressed her concerns over the vineyards affected by the blaze.

"The fruit on the vines are going to be left to rot," Gorin said. "They are smoke-tainted."

The Zogg Fire has destroyed 196 structures, Cal Fire said in a morning update.