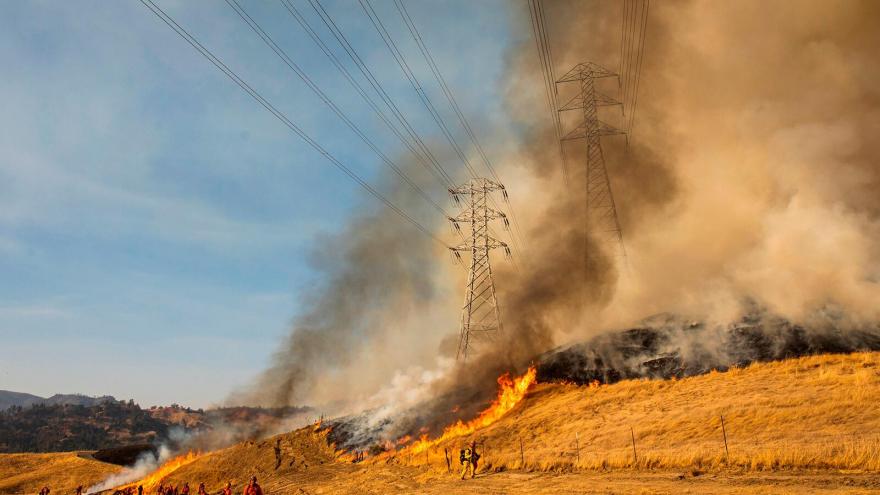 Criminal charges have been filed against the Pacific Gas and Electric Company over the 2019 Kincade Fire in California.

(CNN) -- Criminal charges have been filed against the Pacific Gas and Electric Company over the 2019 Kincade Fire in California.

The massive fire, which burned through more than 77,000 acres of vegetation in Sonoma County, was ignited by electrical transmission lines owned and operated by PG&E in northeast Geyserville, a Cal Fire investigation found. The fire destroyed 374 structures, damaged another 60 and caused injuries.

The utility has faced scrutiny in recent years over its equipment's role in a spate of deadly and destructive California fires. Last summer, PG&E pleaded guilty to 85 counts, including involuntary manslaughter and unlawfully starting the Camp Fire, the deadliest blaze in the state's history.

The Kincade Fire resulted in the largest evacuation in Sonoma County history, which included the towns of Healdsburg, Windsor and Geyserville. It torched more than 5,000 acres within the first three hours.

A hearing in the latest case is scheduled for April 20 in Sonoma County.

Tuesday's filing comes after interviews with dozens of witnesses, the issuing of search warrants, a review of hundreds of thousands of pages of documents and consultation with law enforcement and regulatory agencies, as well as independent experts, the District Attorney's Office said.

"I went with others from my team, along with CalFire, to the location in the Geysers where we believe the fire began as soon as it was safe to do so," Ravitch said in a statement. "Since that time, we have been working with CalFire and independent experts to determine the cause of and responsibility for the Kincade fire. I believe this criminal complaint reflects our findings."

"In the spirit of working to do what's right for the victims, we will accept CAL FIRE's finding that a PG&E transmission line caused the fire, even though we have not had access to the agency's report or the evidence it gathered," a PG&E spokesperson told CNN in an email. However, the utility does not believe it committed any crimes.

"We remain committed to making it right for all those impacted and working to further reduce wildfire risk on our system," PG&E said. PG&E will "work around the clock until that is true for all people we are privileged to serve," CEO Patti Poppe said in a statement disputing the criminal charges.

Fourteen fires burned across the state that fall, leaving firefighters to battle blazes nonstop as millions of people and homes were threatened. The Kincade Fire was the biggest among them, incinerating parts of the wine country in Sonoma County.