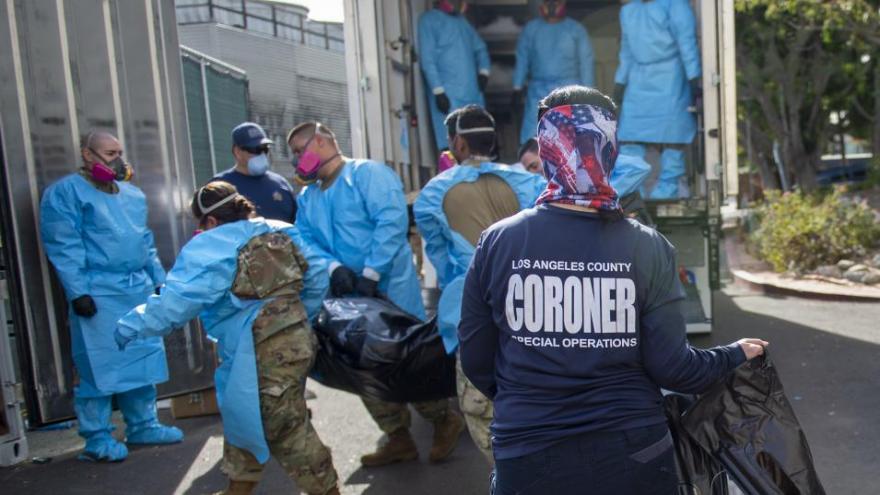 California tops 3 million Covid-19 cases. In this image, Elizabeth Napoles, right, works with National Guardsmen who are helping to process Covid-19 deaths to be placed into temporary storage in Los Angeles on Tuesday, January 12.

(CNN) -- California has become the first state in the nation to record more than 3 million Covid-19 cases, according to data from Johns Hopkins University and the Covid Tracking Project.

The number of cases in the nation's most populated state has tripled in just the past two months.

Current data shows 3,005,830 cases and 33,623 deaths resulting from the virus that has plagued the nation and debilitated the economy.

Hospitals throughout the state remain overwhelmed with patients seeking treatment. Covid-19 hospitalizations have dropped to just under 21,000 patients, but the number of available ICU beds remain incredibly low. There are just 1,113 ICU beds available statewide.

About 90% of the state remains under stay-at-home orders due in part to limited intensive care unit capacity. Regions of the state are eligible to have the order lifted once four-week projections show an ICU capacity of more than 15% available.

More than 1 million of the state's cases are in Los Angeles County, where about 1 in 10 people have been confirmed to have contracted the virus. Health officials speculate the actual number may be as high as one in three.

In another sign of the spread of the virus, an air pollution control agency said on Sunday that it has temporarily suspended limits on cremations to assist crematoriums in Los Angeles County with a "backlog" caused by the pandemic.

Permits for crematoriums usually contain limits on the number of human remains that can be cremated each month, based on the potential impact they will have on air quality, according to the South Coast Air Quality Management District.

But after requests from both the county coroner and health department, the agency issued an emergency order suspending permit conditions that limit the number of cremations, as long as crematoriums submit an email notice and meet certain requirements.

Los Angeles County is struggling to keep up with vaccination demand. While people 65 and older are eligible for the vaccine, the county is still inoculating health care workers.

Dodger Stadium opened last week as a massive drive-thru vaccination site and the county is scheduled to open similar sites at other locations beginning Tuesday, including the Forum, Six Flags Magic Mountain, The Pomona Fairplex, California State University, Northridge, and the LA County Office of Education.

On Saturday, the LA County Department of Public Health confirmed the county's first case of the Covid-19 variant B.1.1.7, which was first discovered in the United Kingdom. The health department said the presence of the UK variant "means virus transmission can happen more easily."

"Residents must more diligently follow the safety measures put in place to prevent additional cases, hospitalizations, and death," the health department wrote in its news release.

"In a typical community we serve, there are about three drugstores, 2 fire stations, and 25 schools," he said. "No organization has the infrastructure to provide easier access to vaccinations than schools."

Testing in the Golden State ramped up over the weekend with more than 427,000 tests conducted in a single day. California's two-week positivity rate continues its slow slide downward and stands at 12.2%. Just over a week ago, the positivity rate reached 14%, the highest percentage seen since widespread testing began.