California to reserve 40% of vaccine doses for underserved communities 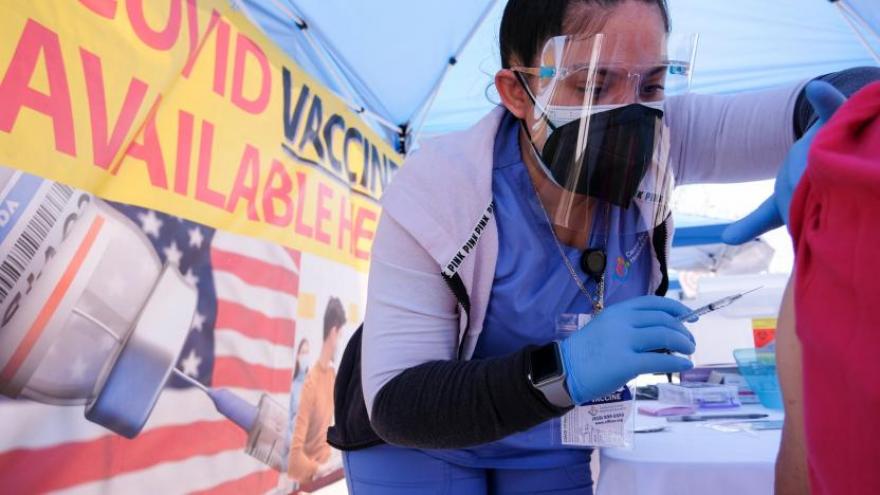 California will set aside 40% of its vaccines for underserved communities in an effort to slow the spread of coronavirus and hasten the reopening of the economy. A woman is shown receiving a vaccine at a vaccination clinic in Los Angeles late last month.

(CNN) -- California will set aside 40% of its vaccines for underserved communities in an effort to slow the spread of coronavirus and hasten the reopening of the economy.

Roughly 40% of the disease "burden" of cases and deaths hit communities at the bottom of the state's Healthy Places Index (HPI).

The Los Angeles and Central Valley areas comprise many of the communities on the low end of the index, which takes into account access to transportation, housing and education status of residents, officials said.

The effort to focus on these areas will change the state's "Blueprint for a Safer Economy," the action plan to battle the virus. Currently, the state has a four-level, color-coded system signifying varying levels of transmission and guidelines regarding closures. Officials said vaccination rates will be tied to tier levels and the jurisdiction's move from one level to another.

The pledge to allocate 40% of vaccine doses to the state's most impacted communities is a move Gov. Gavin Newsom described as "bolder" and "bigger" than the state's past strategy which, despite the effort, is still not meeting goals.

"We will not mark real and demonstrable progress to address the issue of the hardest hit communities that have been underserved across the spectrum and currently are being underserved in terms of access to vaccinations," he said at a press conference Thursday.

California Public Health data shows the state's Latino community has borne the greatest impact due to the pandemic. Around 46% of fatalities of those who've tested positive in the state are Latino, Newsom said.

"This is gonna be stubborn, this is gonna be challenging," Newsom said. "But we are doing something that is necessary at this moment. Not only to do the right thing to communities that have been disproportionately impacted, but also to safely reopen our economy."

Another shift in the tier system will be made once the state has hit the four million vaccination mark.

Currently, the state is at about 1.6 million vaccinations in the underserved areas and expects to hit the two million goal in the next week or two, Ghaly said. A total of 9.5 million vaccines have been administered across California.

"This slight, but meaningful, adjustment heralds our entry into a time where we move into this new normal," he said, hopefully, but cautioned that we need to "keep our foot on the brake, not the gas, both hands on the wheel, both eyes on the road science and data navigating the way."

For the vaccine hesitant, Ghaly said engaging with local trusted messengers is important.

Currently, only about 17% of vaccinations were administered in this lower quartile of the HPI while for those in the highest quartile it is double that, at nearly 34%. The state is working with local officials to make sure the vaccines go to these communities and reach people who live in roughly 400 ZIP codes across the state.

On March 15, people with disabilities and underlying conditions will be eligible for vaccines. Dr. Ghaly says the state's focus on the underserved communities will not interfere with that group, as people with chronic illness disproportionately live in the targeted areas.

Ghaly attributes the latest vaccine push to the state's stabilization after a destructive few months.

"We have come through what has been a pretty dark stage in our pandemic response during the winter surge," he said, noting the transmission levels, hospitalization and ICU rates have fallen and vaccines are not as scarce. "The belief and the understanding of the role of vaccination and creating immunity and protection is important."