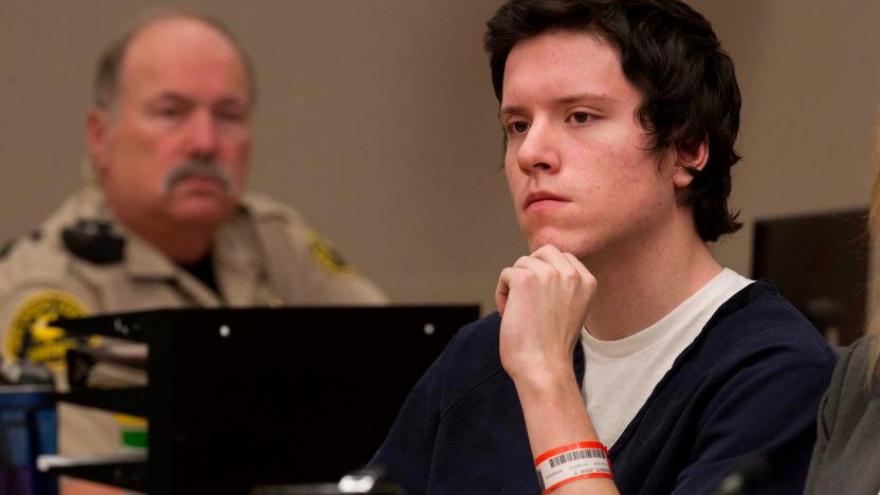 Defendant John Earnest listens during a witness testimony in his preliminary hearing in September 2019, in Superior Court San Diego

(CNN) -- John T. Earnest was formally sentenced to life in prison without the possibility of parole on Thursday for murder and attempted murder in the deadly 2019 shooting at a Southern California synagogue.

The stipulated sentence was life in prison without parole, plus 121 years to life and another 16 years in prison.

Armed with an AR-15 style rifle, Earnest, 19 at the time, killed 60-year-old Lori Gilbert Kaye, who was there to honor her late mother, and injured three others, including the rabbi and an 8-year-old girl, as they worshiped inside a synagogue in the San Diego suburb of Poway. They were among more than four dozen people inside the synagogue at the time.

On Thursday, the court heard from victims and their families.

Kaye's daughter, Hannah, said she hoped her victim impact statement painted a picture "of what white supremacist, bigoted, racist violence looks, smells, sounds, feels and, yes, even tastes like in America in the 21st century -- two years ago and now."

"The voice of my mother is reclaimed within my own," she added. "John Earnest, your bullets will not wreck through my body today as they did my mother's. She is here. She is alive within my words... You are unable to destroy the truth of my experience as much as you may want to."

Hannah Kaye remembered her mother was in the hallway of the synagogue waiting for friends when gunfire erupted.

'I felt my mother die," she said. "I died with my mother in spirit, watching my father try to revive my mother and fail not only as her husband but as a doctor of 40 plus years."

Still. Hannah Kaye said, she refused to dehumanize or hate Earnest the same way he did her mother.

"I would like to take this opportunity to recognize, humbly, the possibility of opportunity in being able to stand in front of my mother's assassin and to be able to speak directly to him and to honor my mother," she said.

Dr. Howard Kaye, the victim's husband of 32 years, called Earnest an "evil" man who took the life of a "superior person," an "accomplished woman" and a "daughter of charity" known for her acts of kindness.

"This takes the bite out of her murder," he said.

Ellen Edwards recalled the day she was told her sister had been killed. She let out a scream. She remembered struggling to break the news to their 92-year-old father, and the sadness and horror that filled those days.

"I'll never forget the look on his face when we told him," she said of her father. "Lori was the apple of his eye."

She added, "We want you, Mr. Earnest, to rot in prison and never walk a free man. We want you to experience hate, pain and you yourself become a victim to the violent acts that go on in prison... May your life be pure hell on earth."

Another sister, Randi Grossman, called Earnest the "worst example of humanity" who went after "the best of humanity."

Others spoke of the long-term effects of the attack, including pain, trauma and recurring nightmares. Some lamented that Earnest was spared the death penalty, but others wished him a long life in the isolation and loneliness of a prison cell.

Almog Peretz, who was wounded that day, said he still suffers anxiety and panic attacks and that Earnest had "killed both my body and my soul."

Earnest was not allowed to look at the victims and their families. He sat in a chair, staring at the front of the courtroom and wearing a white mask and green prison uniform.

Judge Deddeh denied Earnest a chance to address the court, saying he didn't want the proceeding to become "some political forum for him to start making White supremacist or White racist statements."

In a statement in July, the district attorney's office said it hoped life in prison for Earnest is "an appropriate resolution to this violent hate crime and we hope it brings a measure of justice and closure to the victims, their families, friends and the wider community. "

The decision to accept his plea, the office said, came after they consulted with the shooting victims' families.

Earlier this month, Earnest pleaded guilty to more than a hundred federal hate crime charges -- including 54 counts of obstruction of free exercise of religious beliefs resulting in death and bodily injury and involving the attempt to kill -- in connection to the shooting.

That's one count for every person who was inside the synagogue, according to federal prosecutrors. As part of that case, prosecutors referenced an open-letter posted online shortly before the shooting that bore Earnest's name.

The letter was filled with anti-Semitic and White nationalist sentiments, and the author talked about planning the attack in Poway, citing as inspiration the gunman in the 2018 deadly shooting at the Tree of Life Synagogue in Pittsburgh -- and the shooter who killed congregants at two mosques in Christchurch, New Zealand.