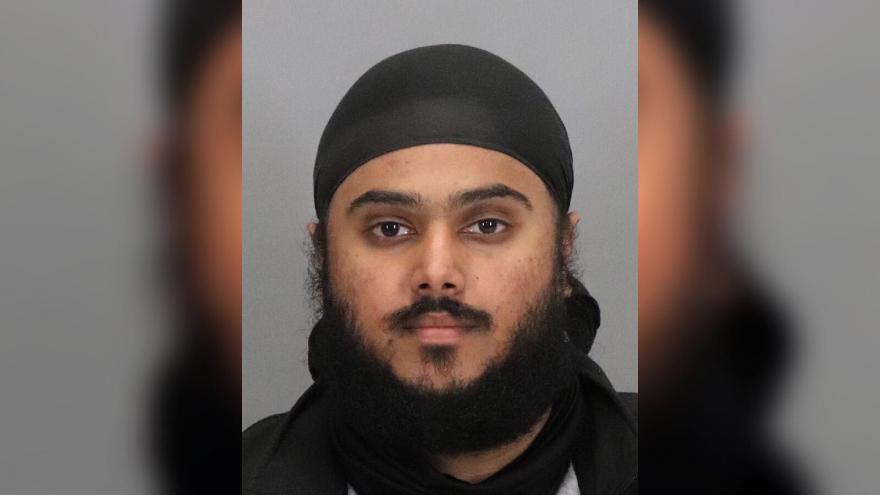 Santa Clara County Sheriff's Deputy Sukhdeep Gill alleged he was ambushed in January 2020 while on duty.

(CNN) -- A California sheriff's deputy was arrested and charged on Friday with felony vandalism and falsely reporting a crime for allegedly staging a "shocking ambush," according to the Santa Clara County district attorney's office.

A year ago, on January 31, 2020, Santa Clara County Sheriff's Office Deputy Sukhdeep Gill reported that "he was shot from a passing car as he stood on a dark rural road," according to a news release from the district attorney's office.

When officers responded, no serious injuries were found on Gill and it appeared that he had been shot only once on his body camera, which was destroyed, the release said. Gill's report triggered a manhunt for the alleged shooter, according to the release.

Gill told officers that "he had parked on the dirt shoulder to urinate during a routine patrol. While walking back towards the driver side of his patrol car he was shot at by the passenger in a silver sedan that had turned off its lights as it approached him."

An investigation found evidence that "exposed serious discrepancies in the deputy's account," the release said. Gill was arrested Friday after a warrant was issued and charged with felony vandalism and falsely reporting a crime, a misdemeanor, the release states.

According to the sheriff's office, Gill was released on his own recognizance and has a court appearance scheduled for March 1.

Gill's attorney, Nicole Pifari, issued a brief statement that said, "For now, all I can say is we are looking forward to getting our hands on the investigation and the evidence to understand why these charges are being pursued."

CNN has reached out to the Santa Clara County Sheriff's Office for comment.

"This case is bewildering and deeply disappointing," District Attorney Jeff Rosen said in the release. "Deputy Gill's actions abused the trust of his fellow officers and diverted public safety resources away from protecting the community to investigate a made-up crime."

Gill has been with the sheriff's office since 2016, according to the release.