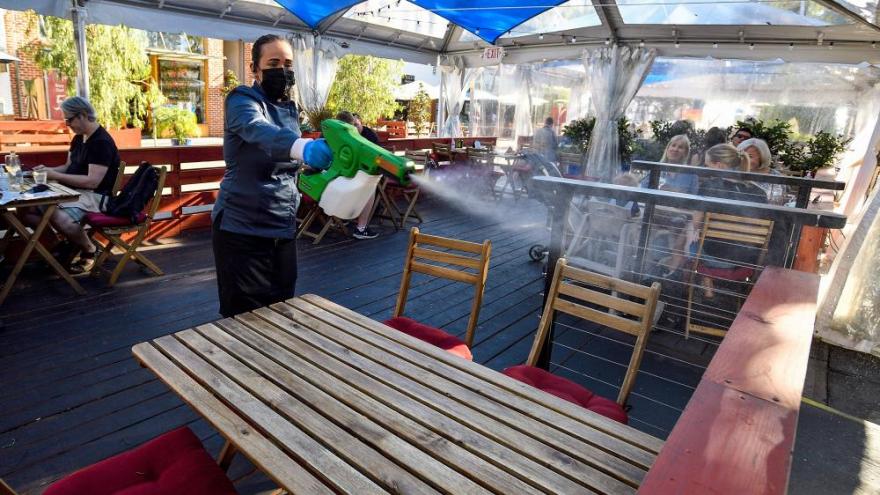 (CNN) -- After a surge of new infections over the summer, California's Covid-19 numbers began showing signs of progress and counties slowly transitioned toward less restrictive tiers in the state's reopening plan.

Then things took a turn for the worst.

Just as the state surpassed a million infections last week, the governor warned the seven-day average of cases was higher than it had been in weeks and health officials said both hospitalizations and ICU admissions were up. Last week also marked the first time since California counties began moving forward in the state's tier system that no county moved to less restrictions.

And this week came more bad news, with the governor announcing he was pulling the "emergency brake" on reopening amid a surge in infections.

"California is experiencing the fastest increase in cases we have seen yet -- faster than what we experienced at the outset of the pandemic or even this summer," Gov. Gavin Newsom said in a news release.

Daily cases in the state doubled in just the last 10 days, he said during a news conference Monday.

The first week of November, Newsom said, saw a more than 51% increase in new cases. The previous highest rate increase the state experienced was 39.2% in June, he added.

The governor said officials are now considering a curfew, but are still taking a look at studies from several other countries -- including France, Germany and Saudi Arabia -- to better understand the efficacy of those measures.

"We have a lot of questions about what that looks like, what that doesn't look like," the governor said.

California wouldn't be alone. Local and state leaders have in the past few weeks announced similar measures.

94% of state's population in most restrictive tier

A staggering 40 California counties also moved backwards in the state's tier system this week, the governor announced Monday, meaning they'll now face more restrictions. A total of 41 counties are now in California's purple, most restrictive tier, which indicates a widespread risk level -- up from just 13 counties that were in the tier last week.

In the purple tier, bars, breweries and distilleries that don't offer food are ordered closed, while restaurants, wineries, movie theaters, places of worship, museums and gyms are outdoor only. Gatherings are only permitted outdoors with a maximum of three households.

"Now is the time to do all we can -- government at all levels and Californians across the state -- to flatten the curve again as we have done before," the governor said in the release.

"This move of now 41 counties in total in purple, tells us exactly, underscores what the governor shared, which is this rapid rise in cases, this significant change in transmission, not just in a couple of counties ... but statewide, is absolutely essential for us to immediately take control of and manage," Ghaly said.

"We must keep transmission low," he said. "And that's to avoid flooding the health care delivery system."

The state saw a 48% increase in Covid-19 hospitalizations over the past two weeks, according to the governor, which now make up about 5% of the patients in the state's health care system he added.

Over the same time frame, ICUs saw more than a 38% increase.

"We have been preparing precisely for this moment," the governor said, adding there are 11 surge facilities throughout the state that can be set up in a matter of 24 to 96 hours and have a total bed capacity of about 1,872.

But as Newsom outlined the individual actions that public health officials have in the past months urged residents to take -- like wear masks, social distance and avoid gatherings -- he issued an apology, saying he "very soberly" acknowledged contradicting his own advice.

The governor said a few weeks ago, he attended a friend's birthday celebration which was an outdoor dinner.

"As soon as I sat down at the larger table I realized it was a little larger group than I had anticipated," he said. "And I made a bad mistake."

"Instead of sitting down, I should have stood up and walked back, gotten in my car and drove back to my house. Instead, I chose to sit there with my wife and a number of other couples that were outside the household."

Newsom said the "spirit of what I'm preaching all the time was contradicted" and apologized to residents "because I need to preach and practice."

"I shouldn't have been there, I should have turned back around," he added, vowing not to make a similar mistake again.