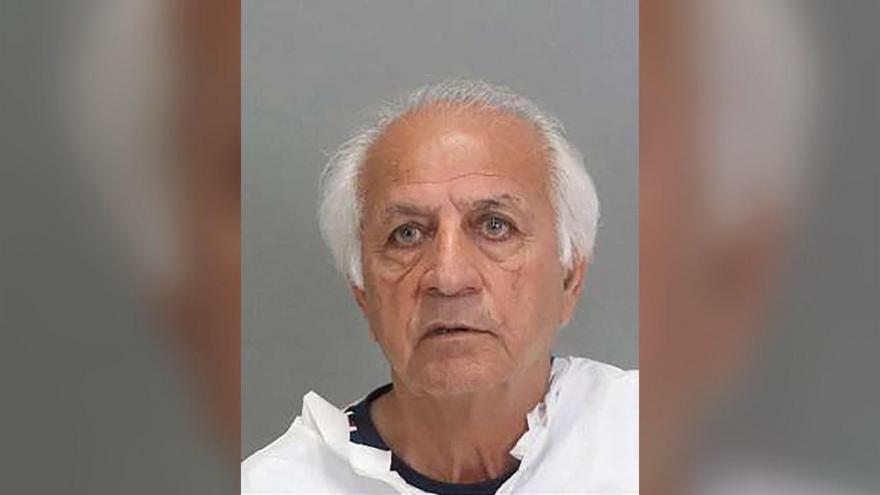 Ali Mohammad Lajmiri, 76, is accused of molesting a 13-year-old girl while she walked her dog in San Jose, California.

(CNN) -- A prosecutor in Northern California was placed on leave after he allegedly used his daughter to lure a suspected child molester, the Santa Clara District Attorney's Office says.

Authorities had been searching for a man who approached a 13-year-old girl several times between August and September while she was walking her dog at the Los Alamitos Creek Trail in San Jose, the San Jose Police Department said in a statement. The man touched the girl inappropriately on the last three occasions they met, police said.

The girl was the daughter of a prosecutor for the Santa Clara County District Attorney's Office.

The prosecutor, who has not been identified, sent his daughter back to walk on the trail while staying in touch with her using cellphones and earbuds, the San Jose Mercury News reported.

In a police report obtained by the newspaper, a police sergeant said the prosecutor told his daughter "to let (the suspect) touch her if she encountered him, but if it was the breast or between the legs to move away. He instructed (the victim) to let (the suspect) identify and make the contact and if she cannot handle things she should move away. He instructed (the victim) to walk back and forth on the designated route and don't interact with anyone for very long."

The prosecutor recorded a video of the man interacting with his daughter and shared it with police before they made the arrest, the Mercury News reported.

Ali Mohammad Lajmiri, 76, was arrested November 12 and charged with lewd and lascivious acts on a minor under the age of 14 and false imprisonment, police said. CNN has reached out to Lajmiri's attorney for comment.

Lajmiri also told police he had Alzheimer's disease and had trouble remembering the interactions, the police report states, according to the Mercury News.

Lajmiri's bail was set a $3 million, according to a spokesperson with the state's attorney general's office. The state agency has taken over prosecution of the case because of the conflict of interest with the District Attorney's Office.

The prosecutor was placed on leave as the Santa Clara District Attorney's Office reviews his actions.

In a letter to his staff obtained by CNN, District Attorney Jeff Rosen said he has to be careful about releasing information that could damage the state and local investigations.

"I am sure you are aware of a matter involving the actions of one of our prosecutors and the arrest of a man for sexually assaulting the prosecutor's daughter," the letter said. "The moment we became aware of this matter, we took immediate action, referring it to the Attorney General's Office and initiating our own internal review. ... As prosecutors, we must never forget that our own behavior -- inside and outside of the courtroom -- matters. The choices we make in our professional and personal lives need to be in harmony with the protocols, laws, and ethics of our criminal justice system."