California man who died in custody was restrained for 5 minutes and lost consciousness, police bodycam shows 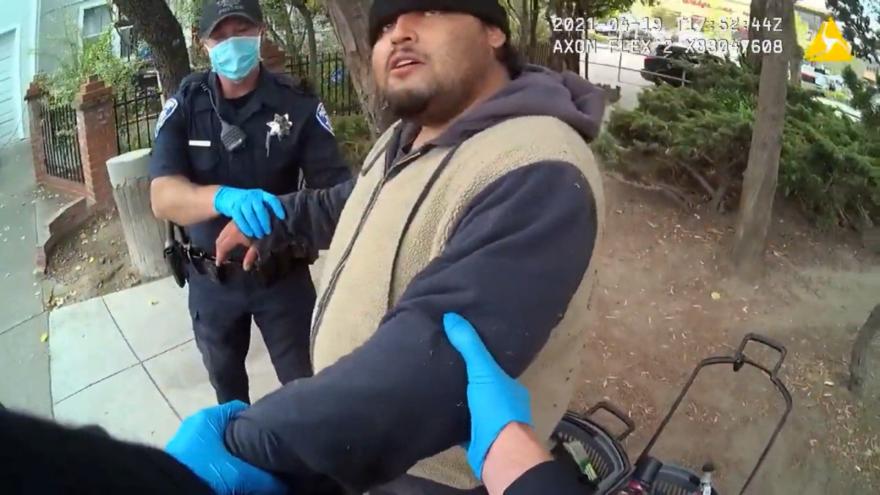 (CNN) -- A California man who died in police custody this month was restrained on his stomach on the ground for about five minutes before he became unresponsive and officers began CPR, body camera footage released Tuesday by the Alameda Police Department shows.

The April 19 death of Mario Arenales Gonzalez, 26, is under investigation by the county and the city, and a lawyer representing Arenales' family alleges the first police news release about the incident was misleading.

The cause of Arenales' death has not been determined.

The incident started around 10:45 a.m. on April 19, when police officers in Alameda -- just south of Oakland -- responded to separate reports about a man who appeared to be under the influence and about a suspect in a possible theft, Alameda police said in a news release that day.

"Officers attempted to detain the man, and a physical altercation ensued," the initial news release reads. "At that time, the man had a medical emergency" and died after being transported to a hospital, the release adds.

On April 23, the city of Alameda announced it hired an attorney -- Louise Renne, founding partner of Renne Public Law Group -- to also conduct an investigation.

Fisher has been with the department since 2010 and Leahy and McKinley joined the agency in 2018, Henry said.

A news release from the city said Charlie Clemmens, a Civilian Parking Enforcement employee, was also involved. The statement didn't say what Clemmens work status was as of Wednesday.

What the footage shows

The body camera footage released Tuesday shows Alameda police finding Arenales outside, just off a road in a residential area.

It shows Arenales talking with police while hesitating to give officers his name for approximately 10 minutes before officers attempt to restrain him.

Arenales appears to be incoherent and continues to resist arrest, prompting officers to take him to the ground, restraining him face down as he struggles and yells.

Based on the video footage, it is unclear what level of pressure the officers used.

"We have no weight on his chest, nothing," one officer says to the others as they attempt to keep him restrained. A second appears to warn, "No weight, no weight."

After about five minutes of being pinned down, Arenales appears to lose consciousness. Seconds after Arenales stops moving or making sounds, a police officer says Arenales is unresponsive. Officers roll Arenales over, and begin CPR, the video shows.

Minutes after CPR starts, an officer declared there was "no pulse," the video shows. Arenales was later transported to a hospital.

The cause of Arenales' death has not been determined, and it is unclear whether drugs or alcohol were involved.

The autopsy and toxicology reports have not been released and are expected to be placed on hold for several weeks before they are finalized, said Julia Sherwin, an attorney representing Arenales' family.

"Our heartfelt condolences go out to his loved ones," the city of Alameda said in a news release. "This outside investigation will provide an independent analysis into what may have occurred the day (Arenales) tragically lost his life."

Sherwin, Arenales' family attorney, said the police body camera footage displays Arenales was unresponsive long before he was transported to the hospital.

CNN has reached out to the Arenales family and Alameda County District Attorney's office for comment on the case.

Arenales was a father and a caretaker for his younger brother who has autism and other special needs, Sherwin said.

"Alameda Police Department is lying to me," Arenales' mother, Edith Gonzalez, added. "You guys made a mistake."

"I have questions of how this happened," Fenn told CNN. "While the videos give us a lot of information, it's not the entire story."

Asked whether the actions of the officers were within police department protocol, Fenn said he hopes the answer will be borne out by the investigation.

"It certainly leads to questions," he said. "Nobody wants to see someone on the ground face down any longer than is absolutely necessary, but I don't know why the officers made the decisions that they made.

"The investigation, I'm hoping, will bear out what the decision points were for the officers, what was going through their minds, and why they did the things that they decided to do."

Asked about Sherwin's criticism of the police department's news release, Fenn said Arenales did experience a medical emergency and rebutted the notion his department was trying to mislead the public.

"We're trying to be transparent with the information we have at the moment," he said. "In these dynamic situations, information changes quickly."