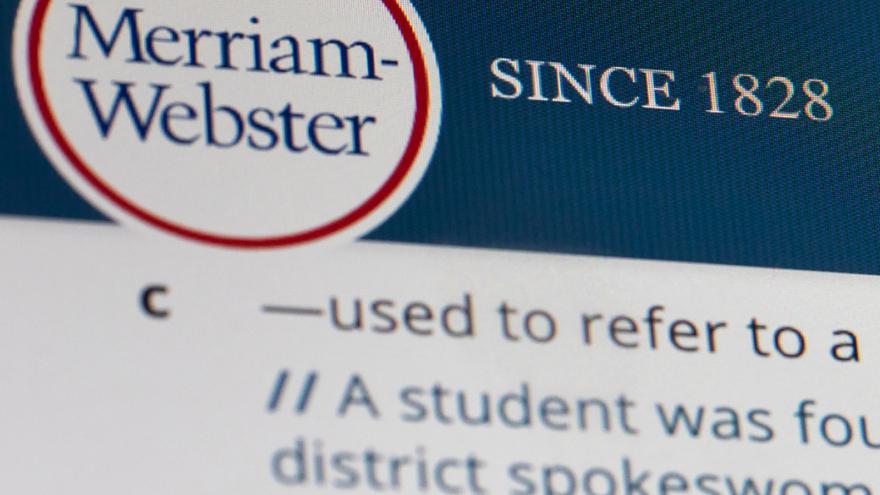 (CNN) -- A California man was arrested this week after he allegedly sent threatening online messages to the Merriam-Webster company over dictionary definitions containing references to gender identity, according to court documents.

Jeremy David Hanson, 34, of Rossmoor, was charged with one count of interstate communication of threats to commit violence in federal court, according to the US Attorney's Office in Massachusetts, where Merriam-Webster is based.

CNN left messages at numbers associated with his family on Saturday, but were not returned. CNN has also reached out to Merriam-Webster for comment, but did not hear back by the time of publication.

According to a criminal complaint, between October 2 and October 8, 2021, Merriam-Webster received threatening messages submitted online through the company website's "Contact Us" page and in the comments section for webpages corresponding to the definitions for the words "Girl" and "Woman."

A user registered as @anonYmous also shared opinions "about certain controversial topics and comments demonstrating bias" in the comments section for the webpages corresponding with the definitions for "Boy," "Girl," Female," and "Trans Woman," the complaint says.

One post from @anonYmous under the dictionary entry for "female" on October 2nd, reads: "It is absolutely sickening that Merriam-Webster now tells blatant lies and promotes anti-science propaganda. There is no such thing as 'gender identity.' The imbecile who wrote this entry should be hunted down and shot," the complaint details.

Over a period of time last October, Hanson allegedly used the company website's "Contact Us" page to send "threatening and despicable messages related to the LGBTQ community," US Attorney Rachael S. Rollins said in a news release.

Less than a week later, Merriam-Webster received a disturbing message under the website dictionary's entry for "Girl." "The moron who created this fake definition should be hunted down and shot. I am sick and tired of these cultural Marxists denying science and destroying the English Language. Merriam-Webster headquarters should be shot and bombed. Boys aren't girls."

The message led the company to shut down its Springfield, Massachusetts, and New York offices for approximately five business days, the news release said.

Authorities later identified @anonYmous as Hanson by tracking the origin of the messages to an account linked to his family's home, according to court documents and the US Attorney's Office statement.

If found guilty, Hanson could face up to five years in prison and three years of supervised release along with a $250,000 fine, according to the complaint.

"Everyone has a right to express their opinion, but repeatedly threatening to kill people, as has been alleged, takes it to a new level," Special Agent in Charge of the FBI Boston Division Joseph R. Bonavolonta said.

"We are always going to pursue individuals who try to intimidate and isolate members of our community by inciting violent, hateful acts. Threats to life are most certainly not protected speech and they cause real fear in victims," Bonavolonta said.

Hanson is scheduled to appear in federal court in Massachusetts on April 29, according to the news release.

Investigators have identified similar messages they believe are also connected to Hanson, made to other entities and officials including the American Civil Liberties Union, Amnesty International and the president of the University of North Texas.

Rollins said her office and law enforcement "will not tolerate threats against members of our communities, no matter what corner of the internet they're sent from."

"Hate-filled threats and intimidations have no place in our society," Rollins said.