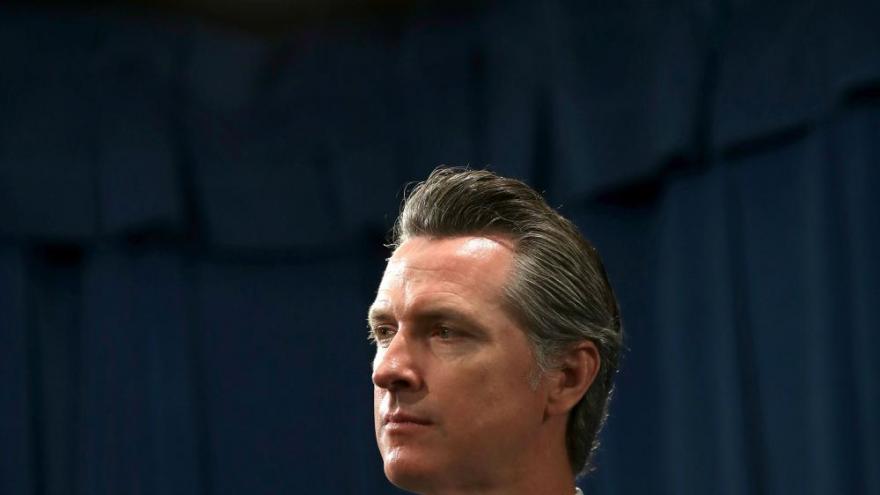 California Gov. Gavin Newsom looks on during a news conference with California attorney General Xavier Becerra at the California State Capitol on August 16, 2019 in Sacramento, California.

The order applied to the Southern California, San Joaquin Valley and Bay Area regions, which are home to more than 90% of the state's population of 39 million people. The four-week ICU projections for these areas show enough capacity to exit the order, according to the California Department of Public Health.

All 58 counties now return to the state's tier-based system, which places each into one of four color-coded tiers indicating which activities and businesses are allowed based on local coronavirus case rates and test positivity. The tiers are reassessed every Tuesday.

"Today, we can lay claim to starting to see some real light at the end of the tunnel as it relates to case numbers," said Gov. Gavin Newsom.

The majority of counties are in the strictest, or purple, tier. Most indoor businesses remain closed but many can open outdoors with modifications, including restaurants, movie theaters, places of worship, and family entertainment such as mini golf. Modifications would include limited capacity and the use of masks.

Under the regional stay-at-home order, personal care services and movie theaters were closed and restaurants were limited to takeout and delivery only.

Schools in the purple tier must offer remote learning only -- but can reopen for in-person instruction after a county has been in the red tier for at least two weeks.

Individual counties, however, have the authority to set their own restrictions and can choose to keep the tougher restrictions in place. California residents can check the status of businesses and activities in their county on the state's coronavirus website.

'Not out of the woods'

San Francisco Mayor London Breed said in a tweet that the city will be in the purple tier. "We will be moving forward with some limited re-openings, including outdoor dining and personal services," she said.

California Health and Human Services Secretary Dr. Mark Ghaly said the surge of cases after the December holidays did not overwhelm the health care system to the degree officials had feared.

"California is slowly starting to emerge from the most dangerous surge of this pandemic yet, which is the light at the end of the tunnel we've been hoping for," he said.

The ICU capacity projections are based on four factors: current estimated regional ICU capacity available, a measure of current community transmission, current regional case rates and the proportion of ICU cases being admitted, according to the Governor's Office of Emergency Services.

The model the state uses to calculate its four-week projections has not been made public, a situation that has led to criticism. Ghaly said the state was making the model available on Monday on the health department's website.

Officials said that state projections show that in four weeks, ICU capacity in the Bay Area will be up to 25%, with the Southern California and the San Joaquin Valley regions rising to 33.3% and 22.3%, respectively.

"We're not out of the woods (but) we're seeing a flattening of the curve," he said during an online news briefing.

He cited a number of statistics that are moving in a positive direction, including that hospitalizations are down 19.8% and Covid-19 ICU admissions are down 9.5% over the past 14 days. The 14-day average positivity rate also continues to decline, down more than 4% to 9.4% over the latest 14-day period.

Newsom, a Democrat, is facing a movement to recall him in part because of the stay-at-home orders he imposed.

California Republican Party Chairwoman Jessica Millan Patterson criticized the decision to lift the restrictions in a Twitter post, saying it was "sad and pathetic."

"This Governor's decisions have never been based on science," she wrote. "Him re-opening our state is not an attempt to help working Californians, but rather an attempt to counter the Recall Movement."

Newsom said criticism that the decision to lift the stay-at-home order was due to the recall movement was "utter nonsense."

Order was instituted as cases surged

The regional stay-at-home orders were instituted in early December as Covid-19 cases surged. The order went into effect if ICU capacity dropped below 15% in one of five regions into which the state is divided: Northern California, Bay Area, Greater Sacramento, San Joaquin Valley and Southern California.

The Southern California and San Joaquin Valley regions have been under the state order since December 6 and the Bay Area since December 17. The mandate, aimed at slowing the spread of Covid-19, instructed residents to stay home as much as possible and not mix with other households. It closed hair salons, museums, movie theaters, and restricted restaurants to takeout or delivery service.

The Greater Sacramento region exited the order on January 12 and the Northern California region never entered the order.

On December 1, the state reported 9,365 patients hospitalized with Covid-19. By January 1, hospitalizations were past 21,000, peaking on January 6 with 22,853. Since then, hospitalizations have dropped with 18,347 reported on Sunday, below the 14-day average of 20,807. Correspondingly, the number of available intensive care unit beds had dropped from 1,810 on December 2 to 1,168 beds on Sunday.

A letter from the California Restaurant Association to its members had indicated that the order would be lifted Monday. The association, which shared the letter with CNN, said it had been notified of the plan Sunday evening by the governor's office.

New cases in the state are on the decline. The most recent data shows 27,007 new infections were reported Sunday but that is below the 14-day average of 30,382 and it marks the first full week of fewer than 30,000 cases each day since early December. On January 1, there were 53,341 cases reported and the 14-day average then was above 40,000.

A spokesman for the restaurant association told CNN early Monday that it did not have any additional comment about the lifting of the stay-at-home orders.

While new cases may be declining, the death toll in California remains high. The state reported its highest single day of deaths on Thursday with 764, above the 14-day rolling average of 499. Deaths on Sunday were 328, below the 14-day average of 504.

The Los Angeles Times reported that it was unclear whether restrictions in Los Angeles County would be eased by the lifting of the order.

Los Angeles County has been the epicenter of the virus' surge in the state. More than 6,800 people have died in the county since December 1 and more than 1 million of the state's 3 million cases are in the county.

About 1 in 10 people have been confirmed to have contracted the virus in Los Angeles County but health officials speculate the actual number may be as high as 1 in 3.

Across the US, Covid-19 infections kept soaring this weekend, as did the death toll. As of early Monday, more than 419,000 people have died from Covid-19 in the United States, according to Johns Hopkins University.