California law school, named for a man who funded the killing of Native Americans, moves to change its name 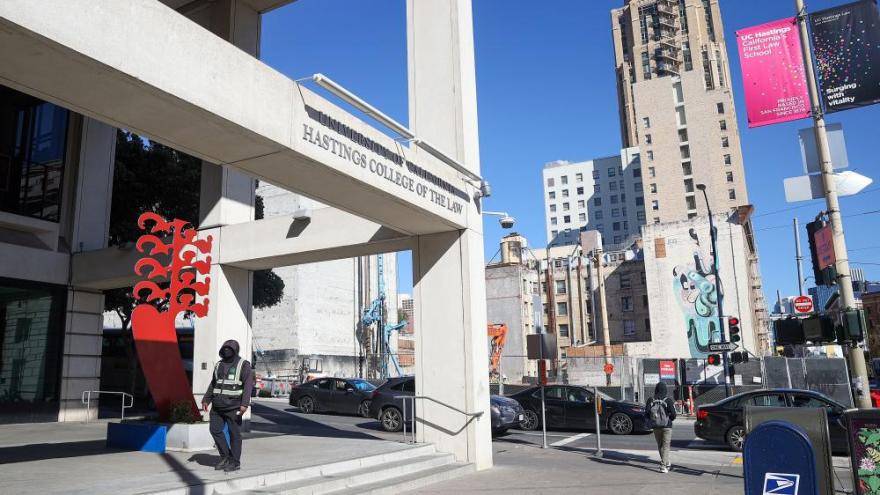 A San Francisco law school named for a man who orchestrated a massacre of Native Americans is moving to change its name.

(CNN) -- A San Francisco law school named for a man who orchestrated a massacre of Native Americans is moving to change its name.

The University of California Hastings College of the Law does not have the power to change the name, which is written in state law. But the board of directors voted unanimously Tuesday to allow the dean to work with the Legislature and Gov. Gavin Newsom to introduce legislation required to do so.

"We never shied away from that history, or I never did, and I wanted to confront it," said David Faigman, chancellor and dean. "And then the question was, 'What to do about it?' And that went to the recommendations to identify initiatives to reconcile and restore justice with the descendants who feel the historical trauma and pain of what their ancestors suffered."

The college -- the state's first law school, which boasts notable alumni including Vice President Kamala Harris -- was founded by and named after Serranus Hastings, the first chief justice of California.

Hastings, with the support of the state, funded the forced removal of the Yuki people from the Round Valley that led to the killing of many members of the tribe.

The earliest the bill can be introduced is January 3, when the Legislature reconvenes, and the college plans to recommend a name by then, Faigman told CNN.

The name "University of California San Francisco," which was initially considered, is not available, since it is already used for a group of medical schools and health universities.

Faigman and the college were initially not opposed to keeping Hastings' name for the college largely because of the complexity involved. They wanted to focus on "restorative justice" and "what was within our power," he said.

After learning of Hastings' wrongdoings, shortly after Faigman became dean, he formed the Hastings Legacy Review Committee in 2017 to work with the Yuki people and explore ways the college can grapple with Hastings' legacy.

In the past few years, the committee has led to the founding of an indigenous law center, bringing in visiting professors for courses on tribal law and courts and creating a commemorative space in the main administration building, according to Faigman.

Other committee recommendations, which Faigman says are in the process of being implemented, include bringing broadband access and educational opportunities to the Round Valley reservation.

"It's something that I think our community can benefit from," Faigman told CNN. "And I hope that we can provide some benefit to their community."

The New York Times reported on Hastings' legacy and the college's controversial naming last month, which Faigman said "has, to some extent, complicated the restorative justice efforts because it's become all about the name."

In a statement, Faigman said the school condemns the "horrific acts [Hastings] perpetrated."

"These acts were unforgivable at the time and are unforgivable today," Faigman wrote in the October 27 statement. "The generational pain of the living descendants of the genocide funded by Serranus Hastings and supported by the State of California remains deep and ever-present."

The state might need to pay descendants of Hastings the $100,000 he donated to found the school, with interest, as the enactment requires if the college "ceases to exist." But whether changing the name is the same as the college ceasing to exist would be up to a court to decide if a lawsuit were filed.

While one of Hastings' descendants sits on the board and has voted in favor of moving forward with the change, Faigman said neither the college nor the descendant has been in touch with all of the family to determine how likely a lawsuit is.

Hastings is the latest institution to attempt to distance itself from the controversial legacy of its namesake. Last year, Columbia University removed the name of a slave owner from one of its dormitories.

Last year, Princeton University removed the name of President Woodrow Wilson from its school of public policy and a residential college. Wilson once called racial segregation "a benefit" and said slaves "were happy and well-cared for." He denied admission to African American men and sought to exclude them from the school's history.