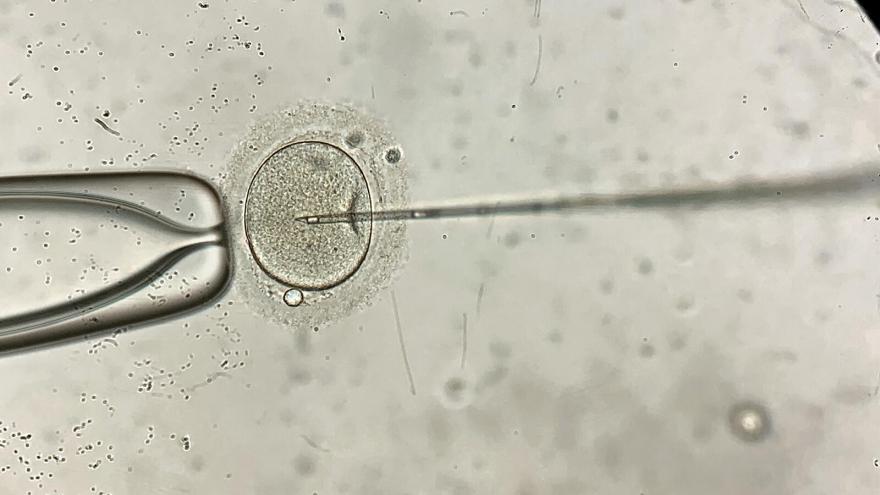 Microscope view of in vitro fertilization in the laboratory.

(CNN) -- In a historic verdict, five victims were awarded nearly $15 million by a jury after a storage tank malfunction at a fertility clinic in San Francisco destroyed their frozen embryos three years ago.

The verdict is the first of its kind to award damages to victims who have lost their chance to have biological children due to a freezer tank malfunction.

The Pacific Fertility Center said a piece of equipment in its cyro-storage laboratory "lost liquid nitrogen for a brief period of time" on March 4, 2018, ruining the viability of some frozen embryos.

"We are truly sorry this happened and for the anxiety that this will surely cause," Pacific Fertility Center said in an apology shortly after the incident occurred.

On Thursday, more than three years later, a jury in the US District Court for the Northern District of California ruled the tank manufacturer should be held accountable.

At least one tank produced by the manufacturer Chart was defective, according to the verdict, and it was a "substantial factor in causing harm" to all five plaintiffs. The jury concluded Chart was 90% at fault while Pacific Fertility Center was 10% at fault.

The manufacturer and Pacific Fertility Center were negligent with respect to the tank, according to the verdict, and the manufacturer should have known that the tank's defective controller was dangerous or likely to be dangerous.

Chart became aware of the defect after the tank was sold but failed to recall the equipment or fix the problem, according to the verdict. The damages encompass the value of the lost eggs as well as the pain, suffering and emotional distress the victims underwent.

"These families have suffered an unspeakable loss and still struggle every day with the tragedy that took place more than three years ago at Pacific Fertility Center," said attorney Adam Wolf, who represents victims in other IVF and genetic material cases.

"Today's jury award honors the pain and suffering that these families have gone through and are still going through," Wolf said.

In an unrelated event that same weekend in March 2018, thousands of frozen eggs and embryos were also compromised at the University Hospitals Cleveland Medical Center. A malfunction caused temperatures to drop in the freezers where they were stored.