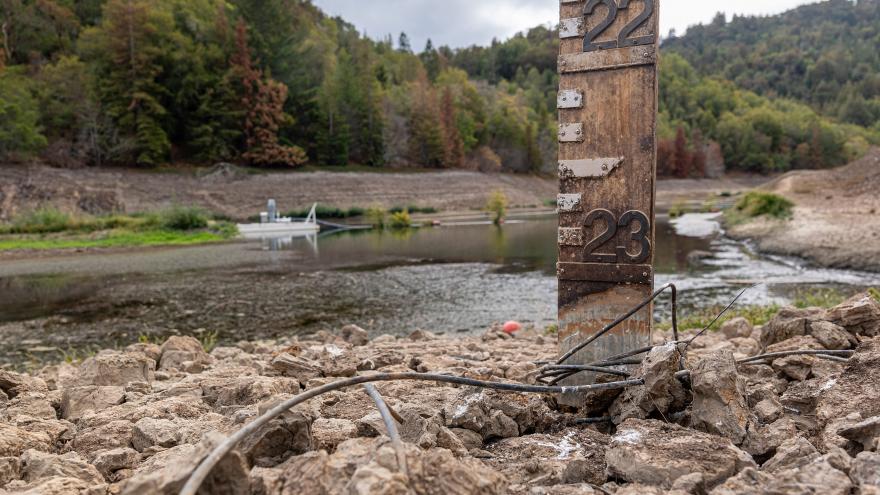 (CNN) -- After California saw its driest year on record in nearly 100 years, the entire state is now under a drought emergency, officials said Tuesday.

Gov. Gavin Newsom issued a statewide drought emergency proclamation, expanding an existing one to add eight counties that were not previously included.

"As the western US faces a potential third year of drought, it's critical that Californians across the state redouble our efforts to save water in every way possible," the governor said in a statement.

The proclamation allows the governor's office to help fund response to the drought and the delivery of water.

California has had a rough year, suffering through high temperatures and low precipitation. Both are factors, when combined with the existing climate change crisis, that are contributing to a devastating wildfire season that hasn't let up in months. The state is experiencing its worst drought since the late 1800s, as measured by both lack of precipitation and high temperatures, the governor's office said.

Water year 2021 -- which ran from October 1, 2020, to September 30, 2021 -- was California's second-driest on record, based on statewide precipitation, with the driest being 1924, according to a report from the state's Department of Water Resources.

"Water Year 2021 ... was an extreme year in terms of temperature and precipitation, and it followed a Water Year 2020 that was likewise warm and dry," according to the report published in September.

Lake Powell and nearby Lake Mead, the nation's largest reservoir, have drained at an alarming rate this year. The treservoirs, fed by the Colorado River watershed, provide a critical supply of drinking water and irrigation for many across the region, including rural farms, ranches and Native communities.

In late July, Lake Powell had fallen to roughly 3,554 feet in elevation -- just 33% of capacity -- according to the US Bureau of Reclamation, below the previous all-time low set in 2005.

And in August, the federal government declared a water shortage on the Colorado River for the first time, which triggered mandatory water consumption cuts for Southwestern states, including California, Arizona and Nevada.

As of last week, all of California is under some form of drought, with some areas experiencing more extreme conditions than others, data from the US Drought Monitor shows.

With more than 45% of the state seeing the most extreme level of drought conditions, wildfires have become common, ripping through hundreds of homes and businesses and burning massive amounts of land.

Firefighters in California have seen more than 8,000 fires this year, which torched 2,495,174 acres so far, according to data from Cal Fire. Currently, they are facing eight large active wildfires in the state, according to the National Interagency Fire Center.

Crews in Santa Barbara County were recently facing heavy winds as they battled the Alisal Fire, which at one point burned near a ranch once owned by former President Ronald Reagan.

The fire, which has torn through more than 17,200 acres, was 97% contained Wednesday, according to officials. Shortly after the fire erupted, officials were forced to close part of Highway 101 and Amtrak railways in the area; they have since reopened. The cause of the fire is under investigation.

Further north, the KNP Complex Fire damaged parts of the Redwood Canyon, which is home to one of the largest sequoia groves as well as old-growth sequoia trees. Hundreds of those tress are believed to have been burned in that fire, which was sparked by lightning last month. The fire has grown to more than 88,000 acres, with 60% containment, according to fire officials.

And in July, crews began fighting what is now the state's second-largest wildfire in history, the Dixie Fire, which has destroyed more than 1,300 structures as it burned through more than 960,000 acres. It was 95% contained Wednesday morning, according to fire officials.