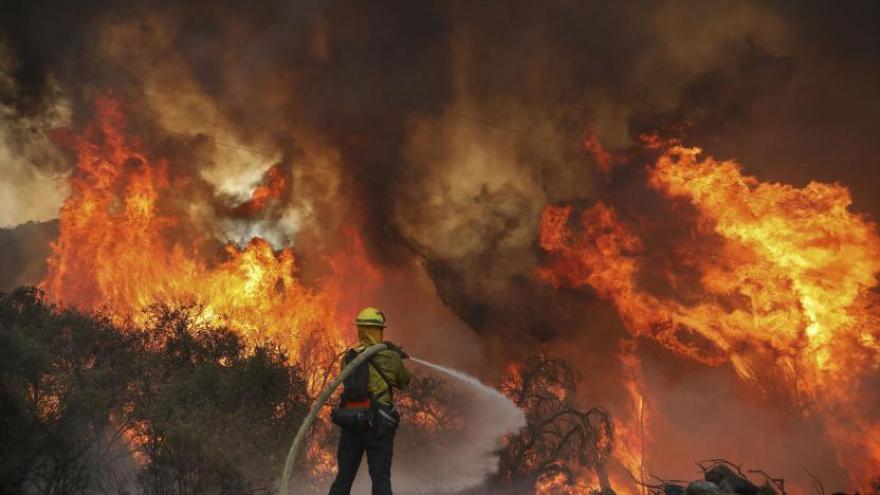 (CNN) -- Authorities issued evacuation orders Monday for the entire town of Auberry, a mountain community of 2,500 in central California, as the Creek Fire continued to burn out of control. The Creek Fire has grown to nearly 80,000 acres in size and is 0% contained.

An evacuation order means there is an immediate threat to life. Officials said evacuation centers have been opened in Fresno and Oakhurst.

Evacuation orders were also issued for additional portions of Madera and Fresno counties, including the communities of Big Creek, Huntington Lake, Shaver Lake and Cascadel Woods.

The fire is burning on both sides of the San Joaquin River near the Mammoth Pool Reservoir and Shaver Lake.

"Any community currently in danger has had an evacuation advisory issued. However, the fire is moving fast. Have a plan and be ready to leave ahead of an order if you feel unsafe," the Madera County Sheriff's Department added in a tweet.

The orders come as wildfires continue ravaging the state of California -- one of which began with a botched gender reveal -- destroying homes and leading thousands to evacuate their communities. There are currently 76 active wildfires burning in the United States, 22 of which are in California, according to the National Interagency Fire Center.

California Gov. Gavin Newsom declared a state of emergency Sunday in five counties as multiple wildfires continue to burn across the state.

The state of emergency applies to Fresno, Madera and Mariposa counties where the Creek Fire is burning, and San Bernardino and San Diego counties where the El Dorado Fire and Valley Fire, respectively, are raging, a statement from the state's Office of Emergency Services (Cal OES) said Sunday night.

On top of the state emergency and evacuation orders, electrical companies are also considering shutting down power.

Pacific Gas and Electric (PG&E) announced Monday that about 172,000 customers across 22 counties in Northern California could have their power shut off starting Monday night to prevent electrical equipment from sparking a wildfire, PG&E Incident Commander Mark Quinlan said during the briefing.

Full restoration of power is expected by Wednesday evening.

PG&E filed for bankruptcy in 2019 after billions of dollars in claims were filed against the company linking it to 2018 wildfires across Northern California.

A red flag warning has been called by the National Weather Service from Monday night through Wednesday morning, according to PG&E senior meteorologist Scott Strenfel. Peak wind gusts of up to 50 mph are expected for many elevated areas in Northern California.

"Unfortunately, this wind event is occurring on the heels of the current heat wave and will produce critical fire potential conditions," Strenfel said.

Tens of thousands of acres have been burned by the three fires, which have also destroyed homes and caused thousands of residents to evacuate, according to the Cal OES statement.

The number of wildfires across the US this year remains below the 10-year average for the same period, the National Interagency Fire Center said.

National Forests close down due to wildfires

National Forests in southern and central California will close to the public Monday night because of the "monumental fire threat" from wildfires across the state, according to a news release from the US Forest Service.

"Most of California remains under the threat of unprecedented and dangerous fire conditions with a combination of extreme heat, significant wind events, dry conditions, and firefighting resources that are stretched to the limit," the release says.

Statewide, all campgrounds will be closed for both day use and overnight camping. Among the areas being closed are the Sierra National Forest, where the Creek Fire is still burning out of control and more than 200 people had to be airlifted to safety over the weekend.

Yosemite National Park, also near the Creek Fire, is preparing for the worst by closing some areas to visitors and protecting vulnerable structures, according to the park's verified Facebook page.

The San Bernardino National Forest, where a pyrotechnic device at a gender reveal party sparked the El Dorado Fire, will also be closed.

The closure means no hiking, biking, fishing or even taking scenic drives on Labor Day. The Forest Service said it hopes the closure will reduce the potential for fires caused by humans.

"The wildfire situation throughout California is dangerous and must be taken seriously," said Randy Moore, regional forester for the USDA Forest Service Pacific Southwest Region. "Existing fires are displaying extreme fire behavior, new fire starts are likely, weather conditions are worsening and we simply do not have enough resources to fully fight and contain every fire.

"We are bringing every resource to bear nationally and internationally to fight these fires, but until conditions improve, and we are confident that National Forest visitors can recreate safely, the priority is always to protect the public and our firefighters. With these extreme conditions, these temporary actions will help us do both."

Firefighters found a dead man while battling a small brush fire Sunday, according to the Los Angeles Fire Department.

The exact cause of the man's death and the cause of the fire are under investigation, LAFD said. The Los Angeles County Medical Examiner's Office is expected to conduct an autopsy in the next few days, spokeswoman Nani Cholakians told CNN.

"Over than 100 firefighters battled through intensely hot weather to extinguish the fire," LAFD said.

The blaze was contained after about three hours. Firefighters protected the nearby Japanese gardens and water reclamation plant.

Two firefighters and one civilian were hurt in the Sepulveda Basin fire. Those injuries were not life-threatening, according to LAFD.

The fires have burned thousands of acres

The Creek Fire in the Sierra Nevada Mountains has burned more than 80,000 acres. The fire started on Friday night, northeast of Shaver Lake and the cause is still under investigation.

The Valley Fire in San Diego County, southeast of Alpine, has burned 9,850 acres since it began Saturday and is at 1% containment, Cal Fire San Diego said in a tweet late Sunday night. Eleven structures have been destroyed by the fire and evacuations have been ordered in the area.

In San Bernardino County, the El Dorado Fire -- which started during the gender reveal using a pyrotechnic device -- has burned about 7,400 acres and is 7% contained, according to the San Bernardino National Forest.

Records broken throughout the state

"This is crazy. We haven't even got into the October and November fire season and we've broken the all-time record," Cordova said.

"It concerns us because we need to get these firefighters off these lines and get them breaks from battling these wildfires," he added.

A national fire potential outlook for the months of September and October issued by the National Interagency Fire Center last week predicted a dramatic increase in fire activity across the West based on weather patterns. The report said several multi-day heat and lightning events coupled with wind primed and ignited fuels that had become critically dry in California.

At least 10 heat records were broken this weekend, according to an alert from the National Weather Service.

It was the hottest it's been in more than half a century, with seven other records set in the 1950s beaten Sunday in various parts of the state, the alert said.

As the Cameron Peak Fire continues to burn through over 89,000 acres in Colorado, a strong cold front is expected Monday evening with near blizzard conditions through Tuesday morning, according to the United States Forest Service (USFS).

"The cold front bringing rain and snow is expected to arrive Monday night. Crews will be preparing for strong winds and a possible wind shift as that front passes over the fire area," according to the USFS. "Snow, heavy at times, will begin in earnest after midnight with northeast winds gusting to 40 mph. This will create near blizzard conditions at times through at least Tuesday morning."

Six to 12 inches of snow are expected across the entire fire area, USFS said, with the highest totals falling above 9,000 feet.

The "snow is very helpful" and will give firefighters an opportunity to be "more aggressive on the fire and not be in such a defensive posture," said Chuck Russell, deputy incident manager for the fire incident management team.

The Cameron Peak Fire began August 13 and as of Monday is 4% contained, according to the National Wild Fire Coordinating Group.