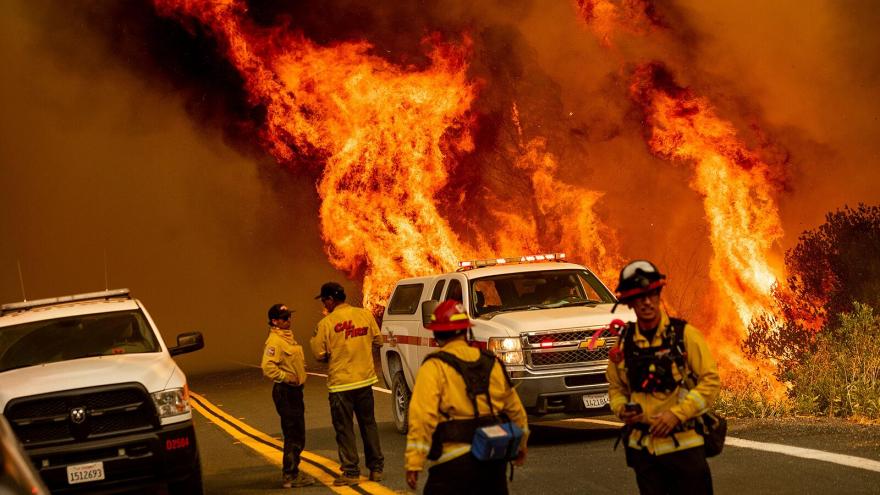 Lightning was responsible for about 585 fires in the past week, Cal Fire spokesman Steve Kaufmann said this weekend.

By Monday morning, more than 1.1 million acres had been scorched since August 15. That's more than five times the size of New York City. That's like the entire state of Rhode Island getting set ablaze.

More than 10 million people in the West are under red-flag warnings Monday -- meaning "warm temperatures, very low humidities, and stronger winds are expected to combine to produce an increased risk of fire danger," the National Weather Service said.

And that's treacherous news for fire crews. More than 14,000 firefighters have been battling the flames, including some on 24-hour shifts. Every resource at the state's disposal is being used, Gov. Gavin newsom said at a press conference.

But there are just too many fires and not enough resources to prevent more homes from being torched, Cal Fire officials have said.

More than 1,200 structures have been destroyed, including at least 871 by the LNU Complex fire. At least four people have been killed.

And without the help of hundreds of inmate firefighters who were released early due to the Covid-19 pandemic, those on the front lines are racing against time and exhaustion to save homes and lives.

"The size and complexity of this fire is not one we've seen in times past," Cal Fire Chief Shana Jones said.

Evacuating during a pandemic

Tens of thousands of residents have been ordered to evacuate. But unlike previous years, evacuees are also trying to protect themselves from coronavirus.

"It just instills a panic when you get that warning on your phone," Daniel Deschene, who was told to evacuate because of the SCU Lighting Complex Fire, told CNN affiliate KGO. "You feel adrenaline rushing. We took personal belongings computers, medicine, clothes and you know anything that we could lose.

Gov. Newsom's office issued a checklist for what to take if residents need to evacuate, including face masks, sanitation supplies, important documents, medication, and three days' worth of food and water.

More than 2,300 people took refuge Sunday night in emergency shelters or even hotels provided by the Red Cross and its partners, the organization said in a release.

Over the weekend, Newsom said the state received a Presidential Major Disaster Declaration due to the fires burning in the northern part of the state. That means President Donald Trump released federal aid to supplement recovery efforts in areas affected by the wildfires.

Those areas include Lake, Napa, San Mateo, Santa Cruz, Solano, Sonoma, and Yolo counties, according to a White House statement.

The disaster declaration came a day after Newsom said that 100% of the state's firefighting resources have been deployed to battle the lightning-sparked blazes. California has requested firefighting support from neighboring states, including Nevada, Texas, and Arizona.

The coming week will be critical in the fight, Newsom said, with weather a top concern, as "winds can change on a moment's notice."