California fires: Firefighters say they're struggling, and more lightning could make everything worse 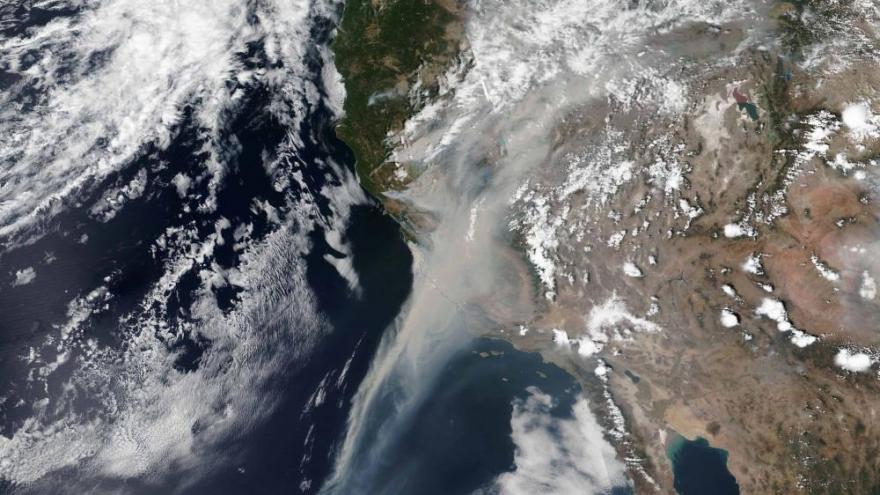 Smoke from the California wildfires stretches some 600 miles off the coast in a NASA satellite image Wednesday.

Hundreds of active fires, including more than 20 major ones largely sparked by a blitz of lightning in recent days, already have burned around 1 million acres, according to Cal Fire officials.

Firefighters are worried about forecasts that say dry thunderstorms -- featuring lightning but little rain -- could spark more fires and spread existing ones Sunday through Tuesday.

"What we're worried about is what happens after Sunday, if we do get more lightning strikes and fires," Cal Fire Battalion Chief Lucas Spelman said Saturday. "What's it going to mean for firefighters who could be on the lines for two, three weeks, even a month?

"Because not only will they have been dealing every day with the heat, smoke and flames, but also physical exhaustion. Mental exhaustion, too."

A day after Gov. Gavin Newsom said almost every firefighting resource in California was battling the blazes, President Donald Trump approved a major disaster declaration on Saturday that will release federal aid to supplement recovery efforts in areas affected by the wildfires.

Those areas include Lake, Napa, San Mateo, Santa Cruz, Solano, Sonoma, and Yolo counties, according to a White House statement.

Though more than 13,000 firefighters are battling the flames -- some on 24-hour shifts -- there are too many fires and not enough resources to prevent more homes from being torched, Cal Fire officials have said.

One of the reasons for a resource shortage: Fewer prison inmates than usual are helping, because of early releases during the Covid-19 pandemic.

'It's the unknown that hurts,' evacuee says

The fires, largely sparked by lightning in the past few days, have been exacerbated by dry terrain during a torrid heat wave. And as tens of thousands of people heed evacuation orders, they're weighing the risk of coronavirus infections as they decide whether to head to official shelters.

In the Lake Berryessa area of Napa County, the LNU fire has turned neighborhoods into piles of ash and debris. At least 560 structures have been destroyed and 125 have been damaged by the wildfire that stretches across five counties, said Sean Kavanaugh, incident commander with the California Department of Forestry and Fire Protection.

Charred frames of cars and trucks with melted tires rested on driveways throughout a burned-out neighborhood Saturday, with only a few houses still standing, a CNN crew saw.

Five deer were about the only things stirring. They drank from the only potable thing in sight: A bowl of water left outside the rubble of what used to be a house.

Vacaville, a city of 100,000 people between Sacramento and San Francisco, is one of areas hardest-hit by the LNU Fire. Flames have burned homes in and outside the city, though most evacuation orders there have been lifted.

In Santa Cruz and San Mateo counties southwest of San Jose, the CZU Lightning Complex Fire has burned about 63,000 acres and destroyed nearly 100 buildings as of Saturday, according to Cal Fire.

"I left with my clothes ... two guitars and a dog," evacuee Robert Patterson told KGO.

Another evacuee, Michael Martyn, told the station that the shelter has been nice, but "it's the unknown that hurts."

Fires blanket parts of the West with smoke

Fires in California and elsewhere in the West are making for poor air quality, blanketing parts of them and the Great Plains with smoke.

Several global air quality monitoring websites show levels in California's Bay Area and Central Valley recently have been worse than anywhere else, including locations generally regarded as having the poorest air quality, like India and eastern China.

As of Saturday, 92 large fires have burned nearly 1.5 million acres in 13 states, including 26 in California, 16 in Oregon, 11 in Arizona and five in Colorado, according to the National Interagency Fire Center.

More lightning in the forecast

Weather conditions over the next few days could worsen the spread of fires in California and other Western states.

Those concerns are reflected in two kinds of alerts from the weather service:

Red flag warnings have been issued for areas covering about 8 million people in parts of four states: California, southern Oregon, Montana and southern Utah. Some were in effect Saturday, but others begin Sunday.

Those warnings say conditions likely to start or spread fires will be imminent during the warning period.

The weather service also issued a fire weather watch for other areas -- covering about 6 million people in California, Oregon and Nevada -- warning of an increased likelihood for lightning and high winds Sunday to Tuesday.