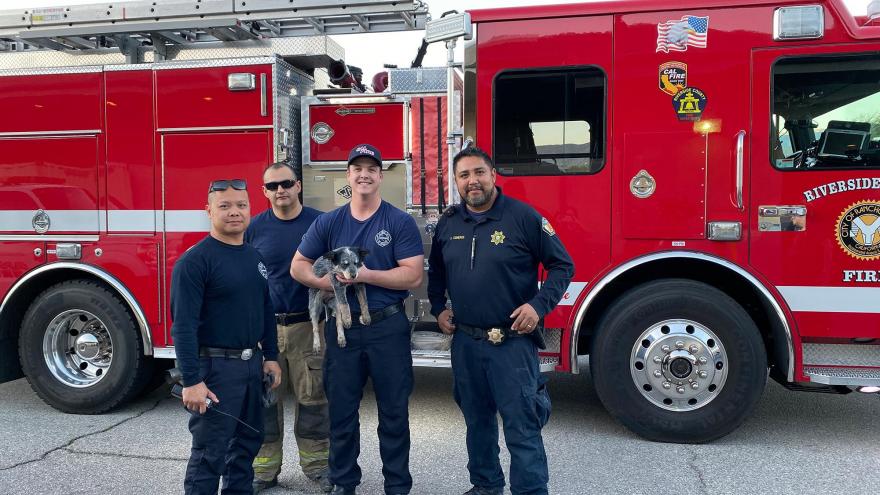 Lana, the 3-month-old Australian cattle dog, poses with her rescuers from the Riverside Fire Department.

(CNN) -- California firefighters responded to an unusual call this week -- a puppy that got her head stuck in the wheel in a spare tire.

Riverside County Animal Services officials initially responded to the call on Wednesday to find the 3-month-old Australian cattle dog in a precarious situation. The dog had put its head through the hole on the wheel that attaches to the hub on a vehicle's suspension. Once in, the dog couldn't get its head out.

"It was so worrying to me. I was trying to imagine how the heck she got put in that position and you just got to remember that puppies will be puppies. Just curiosity. There was probably food on the other side of it or something, she just crammed her head right through," said David Hough, a Riverside County animal care technician.

Hough and Animal Services Officer Jose Cisneros tried to use oil to lubricate the puppy's neck. But when swelling began to appear around the wiggly dog's neck, they decided to transport her to the Coachella Valley Animal Campus.

It was there that the puppy was sedated to calm her down and firefighters from Riverside County Fire came to assist in the rescue.

Firefighters took turns using a reciprocating saw to cut a piece in the wheel just big enough to safely remove the pup.

"She's totally fine now. She doesn't look fazed by it at all," said Hough.

The playful puppy is back with her family, where she can rest safely after the tiring ordeal.

While reuniting the curious dog with her family rescuers learned the puppy's name is Lana. But, she already has a new nickname: #wheeliepup.