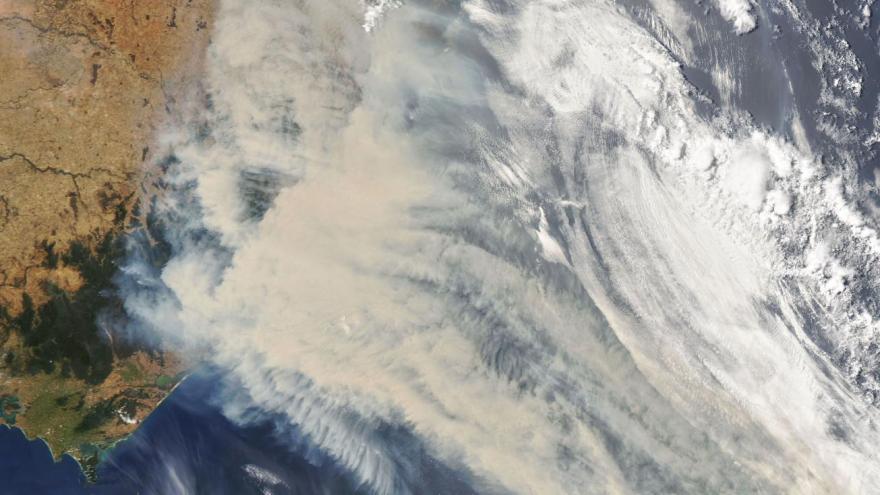 Thick smoke blankets southeastern Australia on January 1, 2020. The smoke has a tan color, while clouds are bright white.

(CNN) -- Twenty veteran California firefighters are heading to Australia as the first US ground crew to battle out-of-control wildfires that have killed at least 23 people.

The Angeles National Forest crew will deploy from Los Angeles on Monday, the US Forest Service reports.

The US has sent dozens of managers to Australia already, but this team is thought to be the first that puts shovels in the ground to dig fire breaks, starts back fires with drip torch cans, and hikes dusty miles in rough terrain.

"I'm looking forward to the opportunity to reciprocate to our Australian brothers and sisters for the same assistance they've given us for many years," said fire technician Jonathan Merager.

Australia and New Zealand have been sending firefighters to the United States for more than 15 years, the Forest Service says. The most recent example was in August 2018, when 138 arrived, a federal spokeswoman said. The last time US firefighters worked in Australia was 2010.

Australia and California firefighters battle a similar menace: flaming eucalyptus trees that can shoot off and send dangerous burning embers miles in strong winds. The eucalyptus leaves in Australia are bigger and can send flames farther, heightening the danger.

Videos from Australia have shown vast stands of trees blazing like roman candles, giant walls of flame sealing off residents of a beach town, and the national symbols of Australia, including kangaroos, running for cover.

Dozens of US fire managers will help in Australia, including some leaving Saturday, but the Angeles crew is unique in its infantry-like capabilities. The Forest Service says the hand-picked 20-person unit includes full-time firefighters with crew boss experience.

Garcia, who is not going to Australia, said the unit is made up of firefighters from several stations in the mountains over Los Angeles.

The Angeles Forest crew deployment is expected to last 30 to 45 days.

Merager, an 18-year Forest Service veteran, said Australians will provide much of the equipment, such as tools for digging fire lines and drip torch cans used for setting backfires.

"I've talked to local firefighters on the ground in Australia," said Merager. "They take safety, firefighting in the forest as seriously as we do. And that's encouraging."