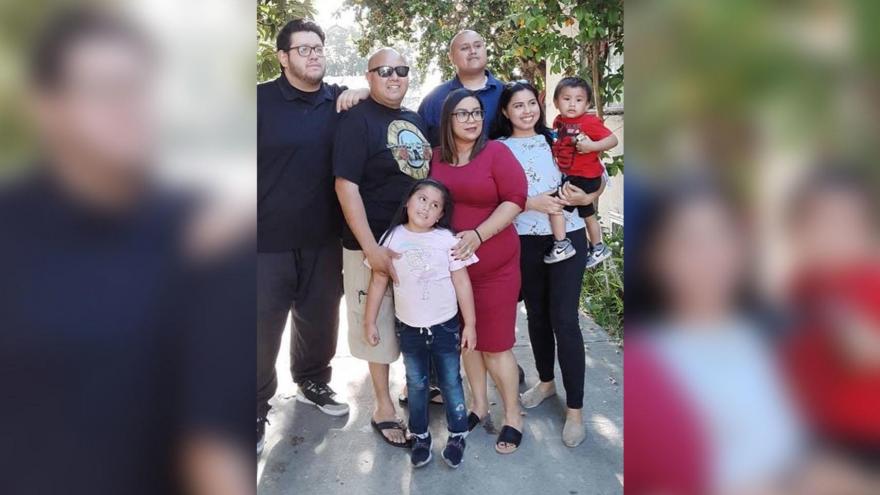 Richard Garay, third from right, with members of his family.

About two weeks later, his father, Vidal Garay, died of Covid-19. At least 28 family members have since tested positive, Garay said. The family is grappling with grief at the same time they fight a virus that has killed more than 125,000 people nationwide.

"I just believe it happened through minimal contact," he said, adding that his father visited three households not knowing he was infected and not showing symptoms.

Some of the interactions, Garay said, lasted no longer than 10 minutes.

Garay told CNN he wants to share his family's story so people know the virus is real, and it doesn't take much to catch it.

Family members who tested positive include his parents, a 2-year-old and two other young children, two brothers and a pregnant sister-in-law, he said. A handful of extended family members are also battling Covid-19.

His 60-year-old father died a day before Father's Day.

"Hopefully his death can help save people," the younger Garay said. "I don't want him to be a statistic. If his story can save a life, it's worth telling his story. It's real. Doesn't take long to get exposed."

"Through my father's death and our suffering, we can save one life or hundreds or thousands. ... I just hope people can hear this message."

His last words to his father

When father and son contracted the virus, they decided to quarantine together at home in South Central Los Angeles to avoid spreading it to other family members.

"We laughed in the beginning because we were going through it together," the son said.

Then things started going downhill. They started off with a fever that got progressively worse, with both having trouble breathing and eating, Garay said. His father had a rare form of anemia not related to the virus, and started having trouble taking his medication.

"He struggled to even drink his medication. He couldn't eat. We had no appetite," Garay said. "I would force myself to try and eat spoonfuls of soup and tried to force my dad to eat it too."

During their joint quarantine to pass time, they discussed dying and what they wanted their funerals to look like, Garay said.

A few days into quarantine, the younger Garay called 911 after he woke up gasping for air. Before the paramedics took him to the hospital, his father sat up and asked if he was OK, he said.

"Dad, I don't think I'm going to make it," Garay told him. Those were his last words to his father.

Days later, his father was taken to a hospital in Los Angeles County, where he took a turn for the worse and had to be put on a ventilator. Meanwhile, his son was at a separate hospital fighting for his life and on oxygen most of the time -- but not on a ventilator.

His father died on June 20. The day he died, his mother visited the hospital and saw him through a window, Garay said.

Garay does not know how the family members got coronavirus -- there was no party and no big gathering. They believe one person got infected and it spread through minimal contact among various family members.

Relatives are recovering and planning his father's funeral, and he has set up a GoFundMe account to help with the various expenses incurred from the illness and pending memorial.