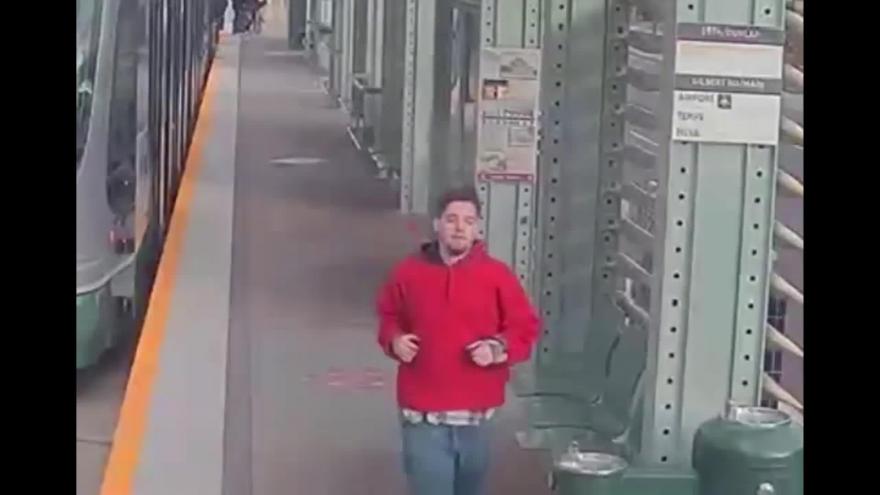 Security footage provided by the Phoenix Police Department shows 26-year-old Austin Shurbutt running away after he tried to steal a woman's wheelchair on a light rail car.

(CNN) -- The day after Thanksgiving, a man in reindeer slippers tried to steal a woman's wheelchair right from under her on a light rail car in Phoenix, authorities said.

But a group of bystanders stepped in to help and successfully wrestled the wheelchair back from him.

The Phoenix Police Department shared security footage of the incident on Facebook. On Saturday night, they announced that a suspect, identified as 26-year-old Austin Shurbutt, had been taken into custody.

Shurbutt was still wearing the reindeer slippers at the time of his arrest, police said in a Facebook post.

"Despite his reindeer slippers, this criminal was NOT spreading holiday cheer," police said on Facebook. "He tried to steal a wheelchair right out from under a woman, but hero passengers on the light rail came to her rescue."

Shurbutt is being represented by the Maricopa County Public Defender's Office, but the office told CNN that he has not yet been assigned an attorney. He was charged with robbery, kidnapping and assault, records from the Maricopa County Sheriff's Office show.

The suspect is being held at the Towers Jail in Phoenix, Sgt. Bryant Vanegas of the Sheriff's Office confirmed to CNN. Shurbutt had his first court appearance early Sunday morning and is scheduled to be arraigned December 16, according to the sheriff's office.

Video footage shows a man in a red hoodie and reindeer slippers abruptly getting up from his seat as the train pulls into the station and aggressively trying to push a woman out of a wheelchair.

The woman frantically grasps at nearby handrails but eventually the man throws her onto the ground and runs off the rail car with the wheelchair.

Fellow passengers storm out of the train in an attempt to chase the man down. Someone tackles him on the train platform and manages to get the wheelchair back.

The man takes off running, directly into the view of the camera.