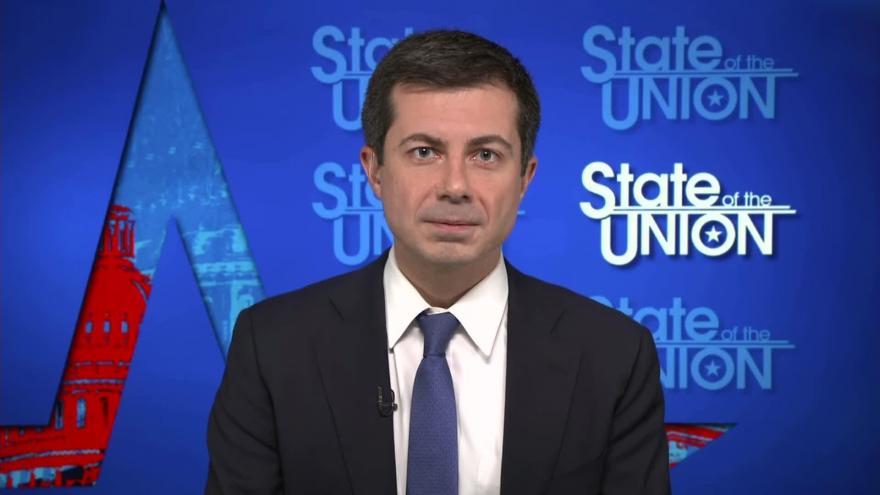 (CNN) -- Transportation Secretary Pete Buttigieg said Sunday the administration will "continue pushing for" paid family and medical leave after the policy was gutted from President Joe Biden's sweeping economic package due to opposition from a key swing vote in the Senate.

"Look, it's something that we believe in, I believe in it. Obviously, it's personal for me. The same is true for the President. And it's something that we'll continue pushing for," Buttigieg told CNN's Dana Bash on "State of the Union," when asked about his message to Americans who won't have the ability to take time off to care for new children, as he recently did after adopting newborn twins.

Democrats were forced to cut the provision from the spending proposal in recent days after it faced opposition from West Virginia Sen. Joe Manchin, a moderate Democrat and key swing vote. But the secretary stressed that while it's been cut from the bill for now, the White House will still pursue the measure in the future.

"We're going to do it from a position of strength because when we pass this bill, we will have delivered the most important pro-family legislation of my lifetime," Buttigieg said. "When you deliver major positive, transformational change in the lives of Americans, you are rewarded with more running room to do more great things. I firmly believe that idea that good policy is good politics, and this framework is good policy."

"This is not half a loaf. This is a feast of good policies," he said, adding that it is also Republicans' responsibility to support these initiatives.

Democrats initially included money for 12 weeks of paid family and medical leave for Americans, but later scaled it back to four weeks in an effort to secure Manchin's support. That was rejected, leading to New York Democratic Sen. Kirsten Gillibrand attempting to find a compromise with Manchin -- which also ultimately failed.

Energy Secretary Jennifer Granholm on Sunday left the door open for programs like paid family leave to be passed later in another bill.

"There are, believe it or not, a few Republicans who will actually support paid family leave because they want to be pro-family," Granholm told NBC's "Meet the Press." "And so maybe they won't vote for it in this whole big bill, but it's possible to go after pieces of this separately."

Buttigieg also expressed confidence in lawmakers' ability to pass the economic bill this week, saying the administration is the "closest that we've ever been" to getting the package approved.

"The President is confident that this framework that we're putting forward can pass the House and Senate and get to his desk for signature. The reason you hear this sense of urgency on his part is not just politics, it's that the country needs this," he told Bash.

"World leaders are gathering in Glasgow right now looking at this chance that we have, and it's barely within our grasp now, to be able to beat the worst effects of climate change. That means immediate action. And that's part of what's in this package," the secretary said, referring to the high-stakes United Nations climate summit in Scotland.