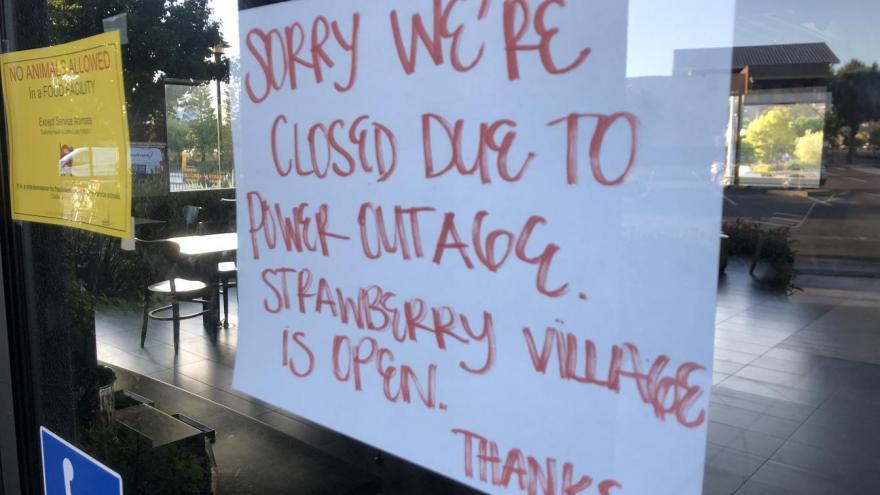 (CNN) -- The power outages that have affected much of Northern California this week have cost San Jose alone at least half a million dollars, the city said Thursday, giving one of the first cost estimates of the massive power shutoffs by utility Pacific Gas & Electric.

PG&E intentionally cut power to almost 800,000 customers Wednesday to help prevent wildfires that could be caused by high winds downing live power equipment -- a tactic it warned residents about in February.

"We had many city employees working around the clock," Mayor Sam Liccardo said at a press conference. The estimate also includes supplies and fuel costs for generators, Deputy City Manager Kip Harkness said, adding he expects the number "to go much higher."

Liccardo says he spoke to the governor and they expect "there will be some compensation from PG&E for the considerable public cost resulting from these power shut downs."

About 228,000 customers had power back by Thursday evening, PG&E said. But that left about 510,000 still without electricity in Northern California. And as winds started kicking up in the south of the state, Southern California Edison began shutting off power to some of its customers at noon Thursday.

PG&E has been criticized in recent years for the role its equipment played in a series of catastrophic blazes across the state, including last year's deadly Camp Fire.

Weather conditions had improved enough that the utility can start its safety inspections and repairs in some areas, a first step to restoring power, PG&E said Thursday afternoon. The "all clear" had been issued for areas affecting about 270,000 customers.

The company said it has about 6,300 personnel ready to begin inspections, but it could take several days to restore power to everyone.

About 20,000 PG&E customers in San Jose -- representing 60,000 residents -- were without power at the start of the day Thursday, the mayor said. Some have had their power restored in the meantime, he said.

The outages are a huge inconvenience for residents and business owners, like Tod Pickett in Placerville. Pickett's sports memorablia shop, Man Cave, was among the first to lose power, and he estimated he's already lost thousands of dollars.

"When the wind blows we have to turn the power off," Pickett said, comparing the situation to that of a third-world country. "It's crazy."

Barbara Nichols lost her home in the Tubbs fire two years ago. When she saw on PG&E's website this week that she was in the zone that would lose power, Nichols emptied her refrigerator, packed its contents on ice and took it to her cousin's freezer a half-hour away.

All for nothing. Nichols didn't lose power after all.

"I just don't think that there was good communication," Nichols said. "I understand why PG&E felt the need to do it, but it's pretty big and it's affected a lot of people and better communication would have helped people be less frustrated by it."

Linda Lokey, who owns a BBQ restaurant in Lincoln, north of Sacramento, told CNN affiliate KTXL that she's scrambling to salvage the meat left in her freezers after she lost all the beer she'd stored in tin barrels.

"For mom and pops like us and all the businesses here, this can be very devastating and catastrophic for our business to recover from," she said. Co-owner Monty Lokey said they're losing "tens of thousands of dollars in food."

The power shutoff could last days, officials have said. The PG&E blackout region stretches from south of San Jose to areas north of Eureka.

Ultimately, if the power is off for two days, it could cost up to $2.6 billion, according to Michael Wara, the director of the Climate and Energy Policy Program at Stanford University's Woods Institute.

"This is very disruptive to people's lives and businesses to not have electric power," Wara told CNN. "An economy as large as California's, when you black out a significant fraction of the state, there are going to be large economic impacts."

Just last month, PG&E announced it had reached an $11 billion settlement with insurance companies for claims stemming from the devastating 2017 and 2018 wildfires in Northern California.

In June, the utility paid $1 billion in damages to local governments for blazes linked to its power lines, poles and other equipment.

Critics say the plan lets PG&E get away with inconveniencing its customers and costing businesses instead of upgrading its infrastructure to prevent fires.

"I'm angry at PG&E," said Blair Roman, who's out of power in Mill Valley. "Most of my friends are angry as well."

"They didn't do what they were supposed to do and keep up with the lines and the power," Roman said. "Their answer to everything is to just shut it off so we can't get blamed for it. It's a major inconvenience, it's going to cost companies billions of dollars. And it all could have been avoided."

"PG&E's decision to protect itself from liability at the expense of hardworking Californians will not be tolerated. This disregards people's livelihoods. We depend on electricity to live and earn a living," he said.

All schools were closed Thursday in Fillmore, in Ventura County, ahead of power outages there.

Annie Hoang, a dentist in Santa Paula, said she moved up dozens of patient appointments in anticipation of losing power.

"If they don't shut us off tomorrow, we'll just be open for urgent situations," Hoang said.