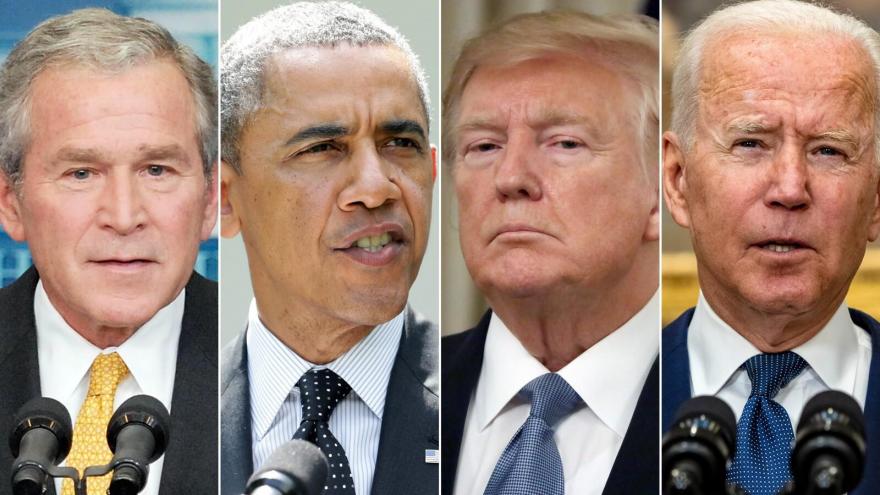 (CNN) -- President Joe Biden has said repeatedly over the past four months -- as recently as last week -- that he refuses to hand off the war in Afghanistan to a fifth US president.

Implicit in that statement is the belief the war shouldn't have been passed to him, nearly 20 years after it began.

Each president since 2001 has confronted an evolving mission in Afghanistan, one that resulted in tens of thousands American and Afghan casualties, frustratingly futile attempts to improve the country's political leadership and a Taliban that stubbornly refused defeat.

Biden has explained his decision to withdraw all US troops as a necessary choice for a war whose purpose had become blurred, adding that it was set in motion by a deal with the Taliban made by President Donald Trump. The chaos that ensued in evacuating Americans and Afghans who assisted the war effort was a predictable and mostly unavoidable outcome, he said last week.

Still, the scenes of rushed departures from Kabul and the Taliban's takeover of the country have proved deeply humbling for a global superpower that spent billions of dollars and lost thousands of lives in its efforts.

How America spent 20 years in Afghanistan, only to have the Taliban resume control again as its troops withdrew, will be a topic for historians to ponder for decades. And who ultimately bears responsibility is a complicated debate.

Here is how each president has approached what became America's longest war:

After the September 11, 2001, terror attacks, which were plotted by al Qaeda from bases in Afghanistan, President George W. Bush vowed to stamp out global terrorism. He called on the Taliban -- which controlled most of Afghanistan -- to deliver al Qaeda leaders hiding out in the country, including Osama bin Laden.

When the Taliban rejected that call, he adopted a war footing. Congress authorized US forces to go after those responsible for 9/11 on September 18, 2001 -- though lawmakers have never explicitly voted to declare war on Afghanistan. Bush, in remarks to a joint session of Congress two days later, acknowledged the coming conflict would amount to "a lengthy campaign unlike any other we have ever seen."

Still, even Bush couldn't have predicted just how lengthy the war would become.

On October 7, 2001, the US military officially launched Operation Enduring Freedom, with support from the United Kingdom. The war's earliest phase mostly involved airstrikes on al Qaeda and Taliban targets. But by November, 1,300 American troops were in the country.

That number steadily increased over the coming months as US and Afghan forces toppled the Taliban government and went after bin Laden, who was hiding in the Tora Bora cave complex southeast of Kabul. Bin Laden eventually slipped across the border into Pakistan.

The coming months and years would see Bush send thousands more US troops to Afghanistan to go after Taliban insurgents. By May 2003, the Pentagon said major combat in Afghanistan was over. Focus for the US and its international partners turned toward reconstructing the country and installing a western-style democratic political system.

Many of the strictures of the Taliban did fall away, and thousands of girls and women were allowed to attend school and take jobs. But Afghanistan's government, still rife with corruption, frustrated American officials. And the Taliban began a resurgence.

At the same time, focus was shifting in Washington toward another war, this time in Iraq, which sapped military resources and attention away from Afghanistan. By the time Bush was reelected in 2004, troop levels in Afghanistan had reached around 20,000, even as oversight and attention were directed more squarely on what was transpiring in Iraq.

The following years would see steady increases in American forces deployed to Afghanistan as the Taliban regained ground in rural areas of the south. When Bush left office in 2009, there were more than 30,000 US troops stationed there -- and the Taliban was staging a full-blown insurgency.

Entering the White House in 2009, President Barack Obama faced a decision on a war he inherited from Bush. Top generals recommended a "surge" in troop levels to weaken the Taliban, which was staging attacks at a heightened clip.

After a grueling internal debate, during which then-Vice President Biden made his opposition to the surge known, Obama ultimately began deploying tens of thousands more troops to Afghanistan. At the same time, he committed to a withdrawal timetable that would begin pulling troops back out by 2011 and insisted on standards in measuring progress in fighting the Taliban and al Qaeda.

Obama said in a televised address that the additional US troops would "help create the conditions for the United States to transfer responsibility to the Afghans." But later, aides said Obama felt jammed by military commanders pushing for a counterinsurgency strategy.

By August 2010, US forces in Afghanistan reached 100,000. But it was in a different country -- Pakistan -- where US intelligence ultimately tracked down bin Laden, who was killed during a Navy SEAL raid in May 2011. Shortly afterward, Obama announced he would begin bringing US troops home with a goal of handing off security responsibilities to the Afghans by 2014.

Over the next years, troop levels declined steadily as the US engaged in fraught diplomacy with Afghanistan's leaders. By the start of his second term, Obama had adopted a view toward the country summed up by members of his team as "Afghan good enough" -- a recognition that attempts to cultivate a western-style democracy were mostly hopeless, and that taking out terrorists and keeping the Taliban in check amounted to the limits of the United States' role.

Obama announced the end of major combat operations on December 31, 2014, with the US shifting to a mission of training and assisting Afghan security forces. Further troop declines put the US on track for a full withdrawal by the time Obama left office.

But a year later, as his tenure was nearing an end, Obama determined the fragile security situation in the country meant the full withdrawal he'd hoped for wasn't feasible. He left office with just under 10,000 troops in the country and said it would be up to his successor to decide what to do next.

As a candidate, Trump vowed to bring American troops home from Afghanistan. But making good on his promise proved difficult as the Taliban continued to surge, and an Islamic State affiliate emerged.

In his first major Afghanistan decision, Trump outsourced troop level authority to the Pentagon. His team was divided along ideological lines, between his military advisers who advocated a continued presence and more staunch nationalists who opposed foreign interventions.

Eventually, Trump admitted in an August 2017 speech that though his instinct had been to withdraw all US troops, conditions made it impossible. He left the future of the American presence there open-ended, rejecting a timeline for withdrawal and instead insisting "conditions on the ground" would dictate any decision-making.

A year later, Trump tasked Zalmay Khalilzad, a seasoned Afghan American diplomat, with leading negotiations with the Taliban meant to bring the war to an end. The talks mostly excluded Afghanistan's government, driving a wedge between the US and President Ashraf Ghani.

Meanwhile, the Taliban continued carrying out a series of terror attacks, including in Kabul, which killed scores of civilians. Even after Trump invited and then canceled peace talks with the group to be held at Camp David in 2019, the discussions continued with Khalilzad.

A deal was struck in February 2020 that set the course for a full American withdrawal in exchange for guarantees from the Taliban it would reduce violence and cut ties to terror groups. But there weren't any measures to enforce those promises, which the Pentagon said went unfulfilled.

Even as US troops began leaving, the Taliban gained strength. And the May 2021 deadline for pulling out all US troops ultimately was passed onto Trump's successor.

Even before entering office in January, Biden had begun weighing what to do in Afghanistan, where he'd long become disillusioned about the war efforts. After having his advice to remove US troops rejected by Obama, Biden was finally in a position to end what he'd come to view as a war without purpose.

Over the course of the early months of his presidency, Biden received advice from his national security team, including "clear-eyed" warnings that withdrawing all US troops could lead to the eventual collapse of Afghanistan's government and a takeover by the Taliban.

Conversely, remaining in the country past the May deadline set in Trump's deal with the Taliban would expose US troops to attacks.

Ultimately, Biden announced that the remaining 2,500 US troops in Afghanistan would come home by September 11, 2021 -- 20 years after the terror attacks that prompted the war in the first place. It was clear, Biden said, that the United States' objectives had been fulfilled -- and that there wasn't anything more his country could do to build Afghanistan into a stable democracy.

The timeline eventually accelerated as the Pentagon worked to pull forces out faster. On July 2, the US handed Bagram Airfield -- a symbol of US military might -- to Afghan forces. The Taliban, meanwhile, were taking over provincial capitals, often without any resistance from the Afghan military.

On August 15, the Taliban returned to power in Kabul after Ghani fled the country -- a collapse that American officials frankly said happened far more quickly than they anticipated.

The US and its allies began a hurried mission to evacuate citizens and Afghan allies who had assisted during the war effort and feared reprisals by the militants.

Biden sent 6,000 US troops back into the country to secure the Hamid Karzai International Airport in Kabul, and facilitate the airlift. But a new deadline -- August 31 -- still stands for those troops to leave.

The Taliban has called it a red line. And now Biden faces another decision on whether to extend or go -- a version of his original choice made in April.