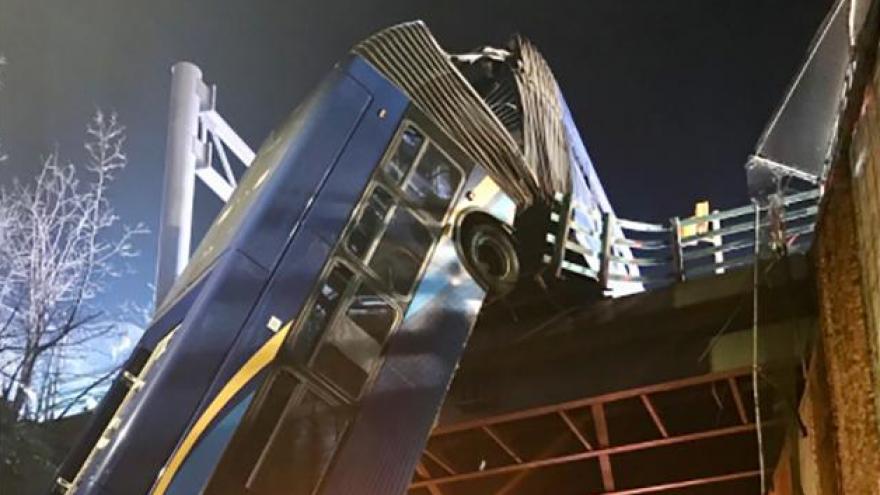 Bus dangling off overpass after accident in the Bronx, New York, on January 14.

(CNN) -- At least seven people, including the bus driver, were injured after a bus crashed through a overpass barrier in New York City's Bronx area, according to the New York Police Department.

The tandem bus is now dangling over the roadway below, the NYPD said.

The crash happened close to midnight Thursday on the westbound Cross Bronx Expressway and University Avenue, according to the NYPD. Those injured have been taken to nearby hospitals, the police said.

It is still unclear whether the accident was caused by operator error or a mechanical malfunction and no arrests have been made so far, the police added.

Streets near the accident site are now closed and officials say traffic is delayed in the area. Heavy tow trucks are on the scene preparing to remove the dangling bus, according to the police.

"Currently we are making sure all the fuel and other hazardous materials within the vehicle is secured until the bus can be pulled onto the roadway," FDNY Acting Battalion Chief Steven Moore said on Instagram.

The Metropolitan Transportation Authority has released a statement.

"When an incident like this occurs we take it very seriously. We are conducting a full investigation and will implement lessons learned in order to prevent it from happening again. We are certain this was a terrifying incident for those customers on the bus. Our hearts go out to them with hope that they can recover quickly," MTA's Chief Safety and Security Officer Patrick Warren said.