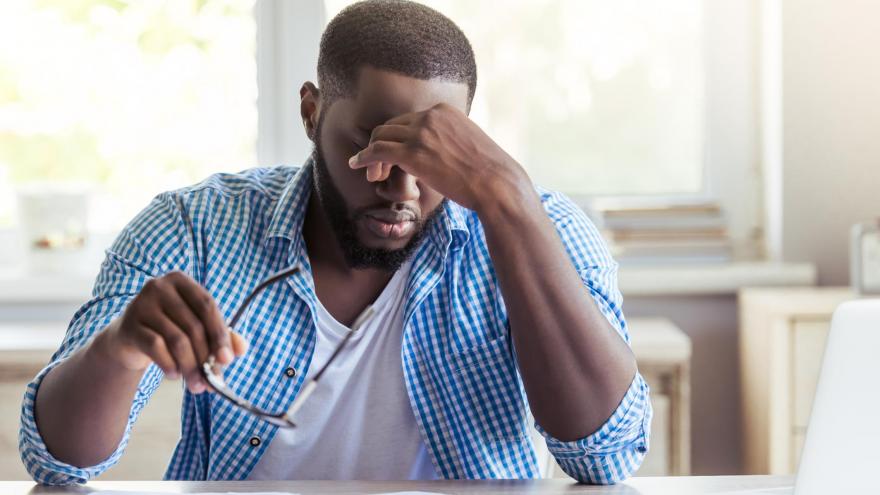 (CNN) -- If you're feeling bone-deep mental and physical exhaustion, or what is otherwise known as burnout, new research suggests you could be at a higher risk for a potentially fatal heart flutter.

Atrial fibrillation, also called AFib or AF, is the most common heart rhythm disorder and the leading cause of stroke in Europe and the United States; it affects more than 33 million people worldwide. In the US, AFib is responsible for approximately 130,000 deaths and 750,000 hospitalizations every year.

Many people living with AFib suffer chest pain, palpitations, shortness of breath and fatigue. But for others, AFib is symptomless, a potentially silent killer.

Now a new study published Monday in the European Journal of Preventative Cardiology suggests chronic stress and exhaustion could be a key factor in developing the disease.

"We've known that stress can cause other types of heart disease, but this is the first study to really link exhaustion to potentially increasing your risk for a cardiac arrhythmia," said study author Dr. Parveen Garg, an associate professor of clinical medicine at the University of Southern California's Keck School of Medicine.

"We know a few prime risk factors that are very important, such as obesity, high blood pressure and smoking, but it doesn't explain everything about why we get this condition," Garg said. "We're drawing a link between exhaustion and atrial fibrillation which really hasn't been described before."

Stress and a silent killer

According to the American Institute of Stress, 80% of American workers say they feel stress on the job; half say they need help with managing stress. In the UK, nearly 600,000 people said they suffered from stress during 2018 while on the job.

But it's more than work, experts say. It's the 24-hour news cycle, the constant connection to social media, and a race to be the best at what you do both at home and at work.

"Burnout can be any sort of stressor -- it doesn't necessarily have to be work," Garg said. "It can be personal stress, home or family tension. It's anyone who is chronically stressed and who suffers from chronic exhaustion."

Prior research has shown a strong link between anger, anxiety, depression, exhaustion and many chronic diseases, including coronary heart disease and heart failure.

But when it comes to AFib, study results have been mixed. Some studies have shown a link between atrial fibrillation and anger or post traumatic stress syndrome. Others suggest depression and other psychosocial impacts are a result of having the condition, rather than a cause of AFib.

"There is increased recognition that symptoms like fatigue and exhaustion are important from a medical perspective. We don't always know the cause, but people with fatigue and exhaustion have altered physiology," said Dr. John Rumsfeld, chief innovation and science officer for the American College of Cardiology, who was not involved in the study.

"For example, they may have higher heart rates and an elevated 'stress response.' Symptoms like this are clearly not healthy. But the challenge is figuring out the cause, and then intervening to improve them," Rumsfeld said.

Garg and his team followed nearly 12,000 men and women who did not have AFib over a 25-year period. The participants were evaluated on five separate occasions on psychosocial measures of anger, exhaustion, social support and antidepressant use. Those results were then compared to the numbers of people who developed atrial fibrillation over that time period.

No association was found between levels of anger, social support or antidepressant use once the analysis was complete. Only people who scored highest in "vital exhaustion," a medical term for irritability, extreme fatigue and a feeling of demoralization, were more likely to develop atrial fibrillation. Why would the two be connected?

"Vital exhaustion is associated with increased inflammation and increased activation of the body's physiologic stress response," Garg said. "When these two things are chronically activated that can have serious and damaging effects on the heart tissue, which could then eventually lead to the development of this arrhythmia."

It's an interesting but yet unproven relationship, said Rumsfeld.

"The current study is a preliminary, 'first step' evaluation of a potential relationship between exhaustion and atrial fibrillation," Rumsfeld said. "It is purely an observational study -- it cannot conclude a causal relationship, or even which direction such a relationship would go.

"We need more research on this," he continued. "Symptoms like fatigue and exhaustion are extremely common. Certainly in people who have medical conditions, but also in those that do not ... and the question is whether these symptoms can pre-dispose to medical conditions like atrial fibrillation."

Garg agrees. "By no means are we saying that if you are able to reduce your levels of exhaustion, you will reduce your risk of developing atrial fibrillation," he said. "That's an interventional study that we haven't done.

"But I think the main take-home message is that high levels of stress, high levels of exhaustion can have an impact on your heart as well as your mind."