Burger King is selling a 'Ghost Whopper' for Halloween 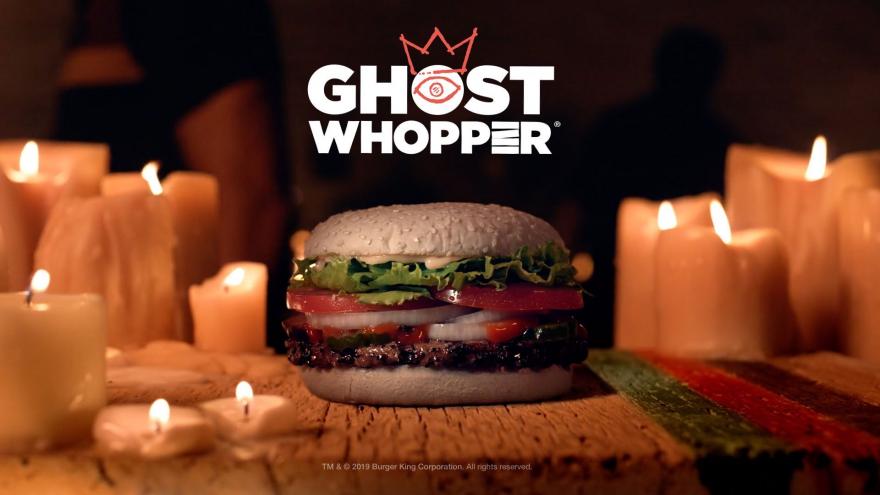 (CNN) -- At 62, the Whopper is approaching retirement age. But Burger King is squeezing new life out of its iconic menu item through themed special editions throughout the year.

The latest release, ahead of Halloween, is a Ghost Whopper, which is a regular burger with a special white cheddar-cheese-flavored (and colored) sesame-seed bun. It's only available for a limited time in 10 restaurants across the United States for $4.59. It will go on sale October 24.

"'It's beyond belief to experience this taste,' said one of the spirits," Burger King said in a press release. "Another one affirmed, 'It's filth!' Others just didn't know what they were holding in their hands because they've never seen a hamburger in their lifetime."

Halloween is a popular holiday for Burger King. In 2018, it sold a Nightmare King, a spooky spin on a chicken sandwich on a green sesame seed bun. Before that, it has sold variations of the Whopper with Halloween themes, including in 2015 when it sold an A.1. Halloween Whopper with a black bun.

Prior to that, it also rolled out a new Whopper meal box, called "Real Meals," labeled with different moods and colors. The packaging came in five moods: "pissed" in red, "blue" for sad, "salty" in teal, "YAAAS" in purple and "DGAF" (that's "don't give a f---" in internet speak) in black.

These promotions attract attention, according to Neil Saunders, managing director of GlobalData Retail. He previously told CNN Business that the brand is adept at getting attention with creative menu innovations.

One Whopper that has found permanent success is the Impossible Whopper. Burger King rolled out the meatless version nationwide this summer to great success. The company said it's attracting new customers to its restaurants.

The promotions also come as competition tightens in the fast food business.

Quick-serve restaurants like Burger King are hyper-competitive, fighting for the same audience. Customers are not typically loyal to any particular brand, so fast-food companies resort to oddball, sometimes outlandish marketing tactics or crazy food creations to draw in customers.

Taco Bell teamed up with Microsoft last week to give away a bundle of Xbox products if they buy Chalupa meals.

In 2017, Wendy's famously challenged a teen to get 18 million retweets to score free nuggets for a year (he got the nuggets and set a record for the most retweeted tweet). And Domino's is chasing new clients by rewarding them for eating pizza — even if they buy it from a competitor.