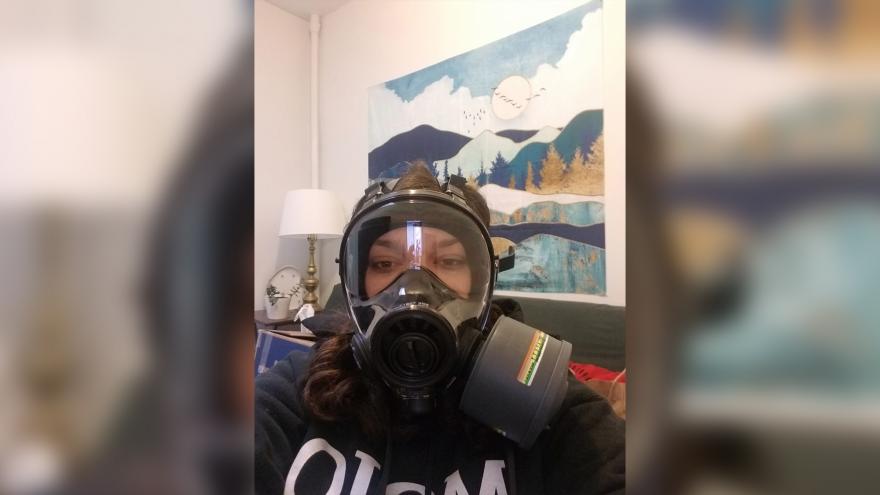 (CNN) -- At the end of December, Los Angeles Times Washington Bureau Chief Kimbriell Kelly was looking at getting Moleskine notebooks as gifts for her staff. A couple weeks later, she was procuring goods of a decidedly different kind: gas masks, helmets and body armor for LA Times staff members who will be attending Wednesday's inauguration of President-elect Joe Biden.

Newsrooms like the LA Times have distributed protective equipment and held safety trainings to prepare reporters for Inauguration Day. Protests and demonstrations around the ceremony in Washington, DC are typical, but after the riots on January 6, journalists are preparing for another violent outbreak.

"I quickly saw my role as a person who had to adapt," Kelly told CNN Business. "My goal is to protect my staff, protect my reporters and make sure that everybody is taken care of."

According to a bulletin obtained last week by CNN, the FBI has received information indicating "armed protests" are being planned at all 50 state capitols and the US Capitol in Washington in the days leading up to Biden's inauguration. The Pentagon has authorized up 25,000 National Guard members for Inauguration Day.

In the days since the storming of the Capitol, authorities and the media have unearthed details and images that paint a picture of an attack that appears even more chilling and violent than what viewers saw on live TV that day. Among the images that have surfaced in the ensuing days includes some that show the mob attacking journalists who were there. 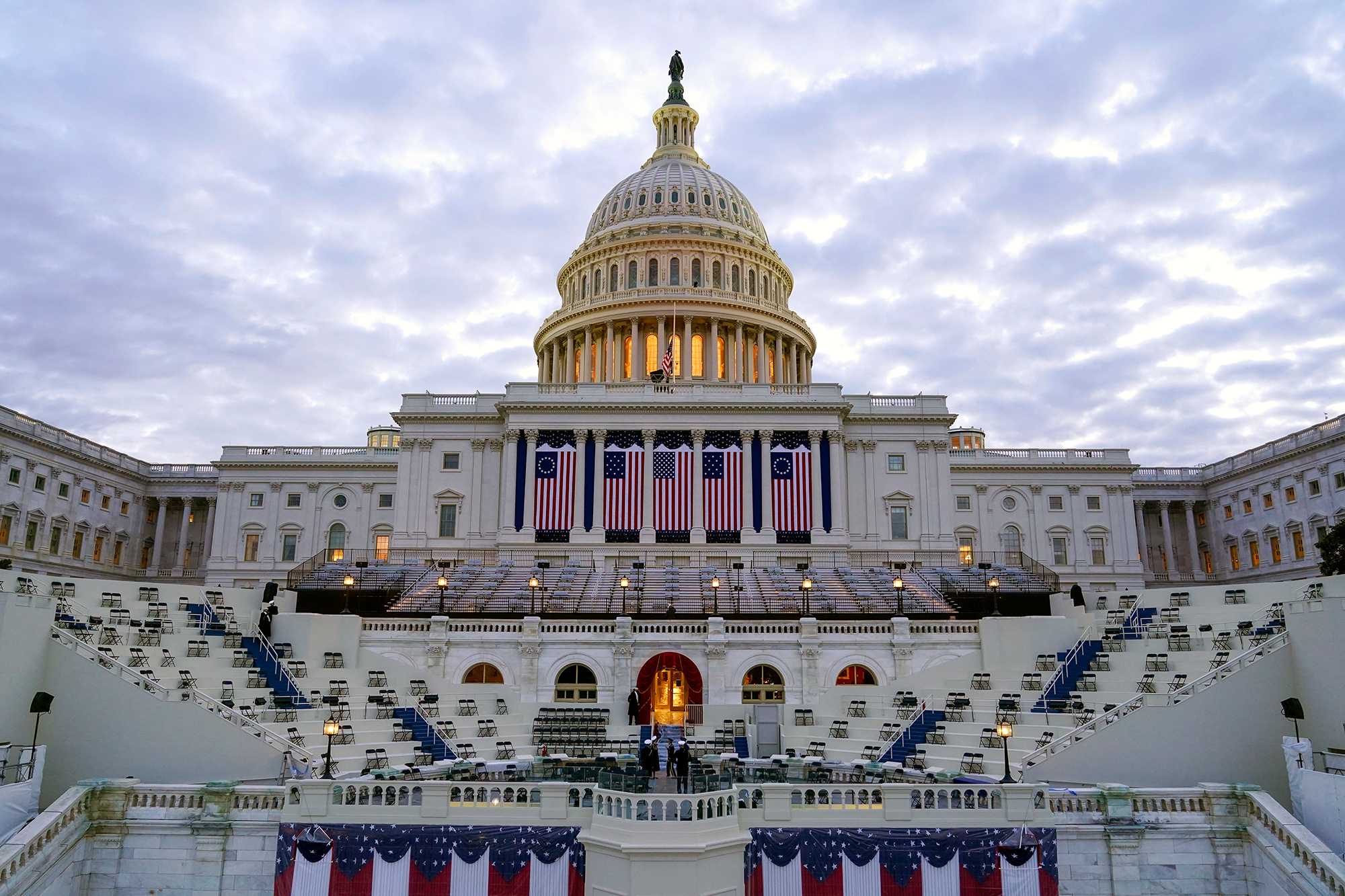 While reporting inside the Capitol on January 6, LA Times Congressional reporter Sarah Wire was handed an evacuation hood and received instructions from Rep. Ruben Gallego on how to use it. Wire will be much more prepared for violence at Wednesday's inauguration: The LA Times sent her a bulletproof vest, helmet, goggles and a gas mask — all of which she's never worn on the field before.

Covering the inauguration is typically "very predictable," said Tracy Grant, a 27-year veteran of The Washington Post, where she serves as a managing editor. As defined by the US Constitution, the transition happens at noon on January 20. But other details around the inauguration of Joe Biden and Kamala Harris have been uncertain.

"All of the things that are very normed and ceremonial have been up in the air," Grant said. "Nothing about this has been predictable, and so we are prepared for things to change right up until the last moment."

The pandemic had already created hurdles to reporting — and reporters, producers and camera operators on the ground will continue to face those challenges and anxieties on Inauguration Day.

BuzzFeed News politics reporter Paul McLeod told CNN Business last week that he was feeling "a bit relieved" ahead of the inauguration. That's because the Covid-19 test he took after covering the events of January 6 — where many rioters were maskless — came back negative.

Jarrad Henderson, senior multimedia producer at USA Today who is Black, said he was feeling "a little anxious"about the inauguration.

"I don't know if I'm a target as a Black photojournalist, Black journalist period during this time," Henderson said. "It's very exhausting. There's some threats that are being made. I cannot unsee 'Murder the Media' that was etched into the side of the Capitol doors last week."

Media organizations have recently sent out tips and guidance for journalists in the field. The Radio Television Digital News Association (RTDNA) launched a journalist training and resource center last week about reporting "ethically and safely" during civil unrest.

"This is the most perilous time for journalists in the field in the modern history of the United States," RTDNA Executive Director Dan Shelley told CNN's Brian Stelter on "Reliable Sources" Sunday. "This is really pervasive, and it's not just the US Capitol. It's not just state capitals. It's in communities large and small, in all 50 states."

Grant said that all reporters covering Inauguration Day for the Post will get a refresher on a training program that teaches them how to make decisions in contentious situations. Post journalists also have received protective gear.

Gannett, the largest US newspaper conglomerate which publishes USA Today, The Detroit Free Press, The Arizona Republic and hundreds of other local papers, has hosted several trainings and panels during the past week. More than 3,000 Gannett journalists listened to a panel last Wednesday where Henderson and others who were at the Capitol and had covered other protests shared their expertise.

Amalie Nash, senior vice president of local news at USA Today Network, recalled staff members asking, "If I have long hair, should I think about putting it up because it could make me a target and I could be dragged by my hair?"; "What's the best way to file if my phone has gone down?"; "What is the best way to get out of a situation if it turns volatile?"

McLeod of BuzzFeed News said he will be wearing running shoes on Inauguration Day along a bulletproof vest and a backpack storing a helmet, a respirator mask and goggles. He had worn some of these items on January 6.

For Inauguration Day, McLeod said he plans to not wear anything that could identify him as a member of the press. One striking difference he noticed between Trump rallies and the insurrection was the aggression from the crowd.

"For all of the pageantry and theater of booing the media, when you go up to talk to people afterward, in my experience, they'd actually been pretty polite," McLeod said about covering Trump rallies. "I identified myself as a reporter to one person [on the 6th] who started screaming at me and trying to scream at other people around that I was a reporter and calling all kinds of attention to me. I got out of there, and obviously, stopped identifying myself as a reporter to anyone."

Newsrooms are having journalists work in teams so that no one is out on the field alone. Some are hiring security, too. Peter Gorenstein, chief content officer at Cheddar, told Digiday his two reporters on the ground that day will have a security guard.

Even with the potential for violence,journalists say they have a duty to be there.

"This is risky to go out, but it's more risky to not go out. It's more risky to let misinformation spread," Nicole Carroll, editor in chief of USA Today, told Stelter on "Reliable Sources" Sunday. "So we're prepared and we're careful and we're going to do our jobs."

Henderson, the USA Today producer, echoed Carroll's sentiment on the role and responsibility of media to document history.

"I just applaud everybody who's going out, who's prepared, who's already gone through this, who, despite their own personal and professional trauma, are still going out to document this history," Henderson said.