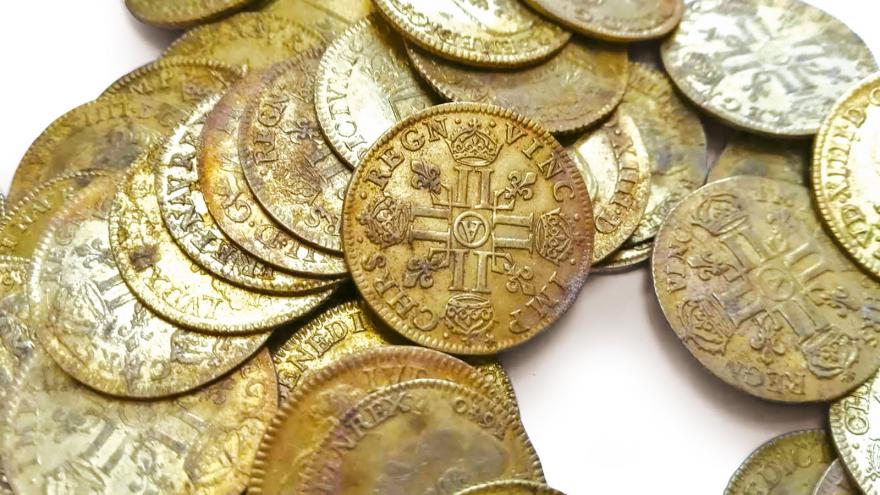 The three craftsmen found the treasure while working on the restoration of a house in Plozévet, Brittany, in the coastal area of Bigouden in 2019, according to a press release from auctioneers Deloys ahead of the sale. The property had been purchased by a couple in 2012.

While merging a barn and a nursery, the builders found a metal box lodged inside a wall, which had gold coins inside. Just days later, above a beam, they spotted a purse containing another set of coins.

All 239 coins were minted during the sovereignty of Louis XIII and Louis XIV, according to the Regional Preventive Archaeology Service in France, which authenticated, analyzed and researched the coins.

There are several especially rare coins among the collection, including the Golden Louis with Templar Cross, Golden Louis with a long curl, and Louis XIV by the Atelier de Dijon -- which has an estimated value of 15,000 euros ($17,805).

The mansion itself was constructed in the 13th century and would have been owned by a family of affluent merchantsor farmers, with the identity of the last known occupants stemming from the 18th century.

The Iroise Sea, located just off Brittany, was a bustling area for trade in the 17th century due to the exportation of Bordeaux wines to England, and cereals to northern Europe, according to the press release.

There was financial decline in the region from 1750 to 1850, partly due to the expansion of docks in Normandy, the release adds. However, the development of the fishing industry revived the local economy.

The value of the coins will be determined at Deloys auction house in Angers, France, on September 29.

They will be split between the three builders who discovered the coins and the two owners of the manor, with each group receiving half of the funds.