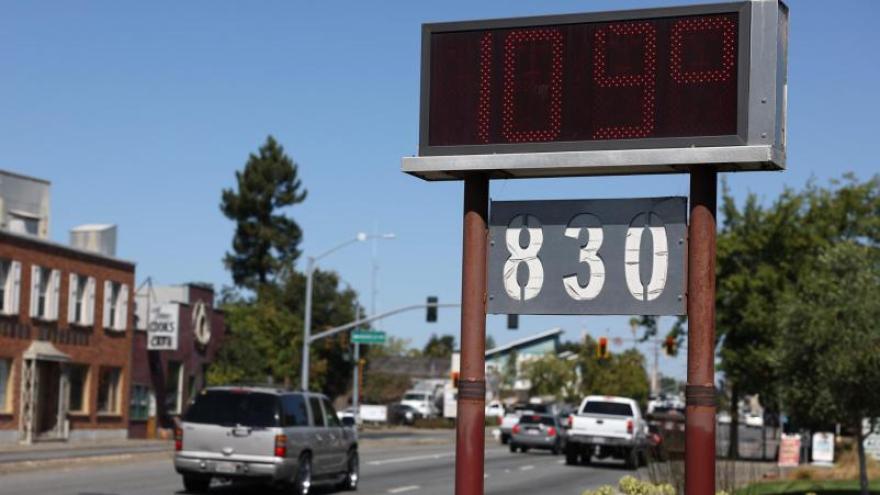 A sign displays a temperature of 109 degrees on September 6 in Petaluma, California.

(CNN) -- A record-breaking heat wave has baked the West for days -- setting record high temperatures, fueling destructive wildfires and threatening rolling power shutoffs in California -- and it could last even longer due to the effects of a strengthening hurricane along Mexico's Pacific coast.

"We are now heading into the worst part of it -- the risk of outages is real," California Gov. Gavin Newsom said in a tweet Tuesday, adding that the temperatures in the state are "unprecedented." The heat wave will be the hottest and longest on record in September for California, he said.

Pacific Gas & Electric, the nation's largest utility, has notified about 525,000 customers to prepare for potential rotating outages, and California residents have been urged to conserve power in hopes of avoiding them. The California Independent System Operator, which manages most of the state's power grid, issued a Flex Alert for the 8th consecutive day Wednesday, calling on residents to set thermostats to 78 degrees or higher, avoid using major appliances and turn off all unnecessary lights between 4 p.m. and 9 p.m.

The California Independent System Operator issued an emergency alert for Tuesday -- when peak demand hit an all-time high of 52,061 megawatts -- saying grid conditions had worsened and energy supplies were insufficient to cover demand. The alert was lifted hours later and the operator thanked "consumer conservation."

With the heat exacerbated by climate change, some communities across the region have seen record high temperatures: Sacramento hit 116 degrees Tuesday, the hottest day on record for the state capital, according to the National Weather Service. Records were also broken all over the Bay Area, with some cities shattering previous daily records by more than 10 degrees.

While relief was expected Thursday, the oppressive heat is now expected to last through at least Friday, with Hurricane Kay forecast to dictate Southern California's weather pattern in addition to bringing strong rains and high winds to the Mexican Coast.

Kay will still be about 220 miles south of San Diego on Friday, according to the National Weather Service in Los Angeles, but the flow around the storm will bring easterly winds to the area, which could bring extreme heat all the way down to the beaches.

The weather service in San Diego extended the excessive heat warning for the region through Friday to account for the possibility of high temperatures well into the 90s to 100 reaching the coast.

And the ongoing heat wave may, in fact, be one of the worst on record for any month, not just September, UCLA climate scientist Daniel Swain said in a Twitter Spaces discussion Tuesday.

"This will be essentially the worst September heat wave on record, certainly in Northern California and arguably for the state overall," Swain said. "By some metrics, it might be one of the worst heat waves on record, period, in any month, given its duration and its extreme magnitude, especially in Northern California and especially in the Sacramento region."

Jan Null, a California meteorologist and owner of Golden Gate Weather Services, pointed to San Jose, which hit 109 degrees Tuesday, breaking an all-time high temperature record. Nine of the city's top 10 hottest days have occurred in the 21st century, he said -- a sign the climate crisis is stoking extreme heat. "And all the modeling is showing that we are going to see more frequent heat waves and longer heat waves," Null said.

Greenhouse gas emissions from human activities have heated the planet by about 1.2 Celsius since preindustrial times and that warmer baseline means higher temperatures can be reached during extreme heat events, scientists say.

Numerous heat records have been set across the West, according to the weather service.

Salt Lake City hit 104 Monday, the hottest September day on record and also the 32nd day this year with temperatures reaching at least 100 degrees, beating the previous record by 11 days.

Temperatures in Billings, Montana, reached 100 degrees Monday, which tied a previous record. This was the first time Billings has hit 100 degrees twice in the same September.

Wildfires ignited throughout the West

The hot and dry conditions also mean that fires will spread more quickly, rage more intensely and burn for longer.

Several destructive wildfires erupted over the past week, with at least four people dying in two California blazes that also burned homes and thousands of acres of land.

The fires, burning simultaneously in parched drought-stricken lands, have choked the hot atmosphere with smoke, bringing unhealthy air quality to parts of the Western states.

The thick smoke, billowing from numerous wildfires, is visible from space, according to images released by the National Oceanic and Atmospheric Administration

The fires have also displaced thousands of residents as the flames advanced on communities, slashing through dry vegetation, and burning homes and cars.

Two people were killed as the fast-moving Fairview Fire swelled rapidly over parched vegetation in Southern California on Monday, forcing hundreds of residents to flee. As of Wednesday, the fire had burned 7,091 acres and was 5% contained, per an update from fire officials.

To the north, in Siskiyou County, two women, ages 66 and 73, died in the Mill Fire that burned 3,935 acres and destroyed 107 structures as of Wednesday, according to Cal Fire.

Nearby, the Mountain Fire, also burning in Siskiyou County, tore through 11,690 acres.

In Oregon, the Cedar Creek Fire had consumed 18,143 acres in six days after being sparked by lightning, authorities said.

Meanwhile, the Ross Fork Fire in Idaho that ignited in mid-August continues to burn and has engulfed 28,874 acres. Firefighters had it 2% contained Wednesday.