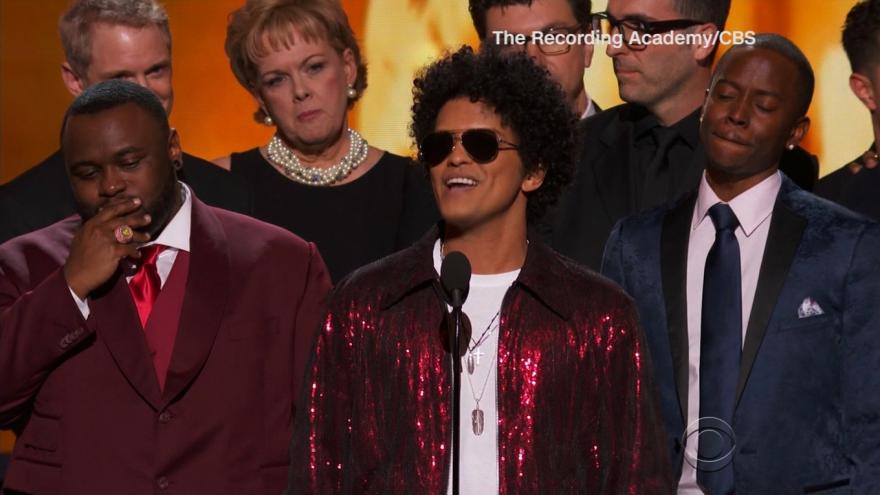 NEW YORK (AP) — The Grammy Awards seemed poised to make this a triumphant year for rap at music's showcase event — until Bruno Mars crashed the party.

The song-and-dance man from Hawaii won all six awards he was nominated for on Sunday night, including the three most prestigious Grammys for song ("That's What I Like"), record ("24K Magic") and album of the year. His music also dominated the rhythm and blues categories.

The Grammys on Sunday also saw Kendrick Lamar win five awards, Jay-Z go home empty-handed, some memorable performances by the likes of Lamar, Kesha, Mars and Logic, an odd oversight of singer Lorde and a surprise cameo from Hillary Clinton.

In accepting a trophy for the album "24K Magic," Mars recalled when he was 15 years old and singing shows for tourists. He'd perform hits written by Babyface, Teddy Riley and Jimmy Jam & Terry Lewis, and loved looking down from the stage to see people from all over the world who had never met dancing together and toasting one another.

"All I ever wanted to do with this album was that," he said. "These songs were written with nothing but joy."

Mars has won 11 Grammys in his career.

His success, however, instantly became a target for second-guessers, similar to people befuddled last year when Adele won album of the year over Beyonce. Social media filled with commentary about whether Lamar's hard-hitting disc "DAMN" was more deserving. One meme that spread on Twitter showed Houston Rocket James Harden rolling his eyes in supposed "reaction" to the news.

Beyond being a critical favorite, Lamar seemed primed to be the evening's star. He opened the Grammys with a hard-hitting medley that depicted black dancers falling to the floor to symbolize being shot, and won the night's first televised award. His work swept the rap categories, the prime factor in the night's most-nominated artist, Jay-Z, winning nothing.

Lamar paid tribute to Jay-Z ("Jay-Z for president," he said with a smile) and other forebears in accepting a Grammy.

"I thought it was about the accolades and the cars and the clothes," he said. "But it really is about expressing yourself and putting that paint on the canvas for the world to evolve for the next listener, the next generation after that. Hip-hop has done that for me."

Clinton's appearance was the punch line for a skit where host James Corden pretended to cast celebrities for what he thought would be a sure-fire Grammy contender for spoken world performance next year, reading from Michael Wolff's best-seller about the Trump admininistration, "Fire and Fury." Cher, John Legend and Snoop Dogg left him frustrated, but then Clinton lowered a copy of the opened book in front of her face to reveal herself.

The attempt at humor wasn't a hit with everyone: President Trump's ambassador to the United Nations, Nikki Haley, tweeted that the skit ruined the show for her.

Most of the show's political references — to topics like gun violence, immigration reform and women's rights — were carefully scripted.

Kesha was joined by Cyndi Lauper, Camila Cabello, Julia Michaels, Andra Day and others in a performance of her Grammy-nominated song "Praying," which is about fighting back from abuse. Singer Janelle Monae introduced Kesha and tied the appearance to the current flood of women speaking up about sexual misconduct. Dozens of artists and music industry players also sported white roses in support of the Time's Up and #MeToo movements against sexual abuse and harassment.

The show also featured a somber performance of Eric Clapton's "Tears in Heaven" by country artists Maren, Eric Church and the Osborne Brothers. All were on the bill for the Las Vegas show in October that was torn apart by a mass shooter.

Social media was curious about the seeming snub of album of the year nominee Lorde. She wasn't among the night's performers, even as classic rockers Sting and U2 made multiple appearances.

"It's hard to have a balanced show and have everybody involved," producer Ken Ehrlich said backstage. "Every year's different. We can't have a performance from every nominee."

The Grammys were also a clear example of rock 'n' roll's decline as a creative force. No rock awards were given during the televised portion of the Grammys. Sting sang a 30-year-old hit and the majority of rock's references were about artists who had died like Chuck Berry, Fats Domino and Tom Petty.

The Rolling Stones, once judged rock's kingpins, won the third Grammy of their career — for best traditional blues recording.

Alessia Cara won the Grammy for best new artist, and remembered the time when she would "win" Grammys in her dreams while singing in the shower.

The late Leonard Cohen won a Grammy for his performance of "You Want it Darker." Actress Carrie Fisher and sound engineer Tom Coyne were other posthumous winners.

As it has in recent years, the Grammys downplayed the awards for performances by the industry's biggest stars. Highlights included Mars and Cardi B dueting on "Finesse"; Rihanna, DJ Khaled and Bryson Tiller on "Wild Thoughts"; and Patti Lupone's Broadway classic "Don't Cry For Me Argentina."