'Brothers in blue': One fallen officer's kidney was a match to a fellow officer who was injured in the line of duty 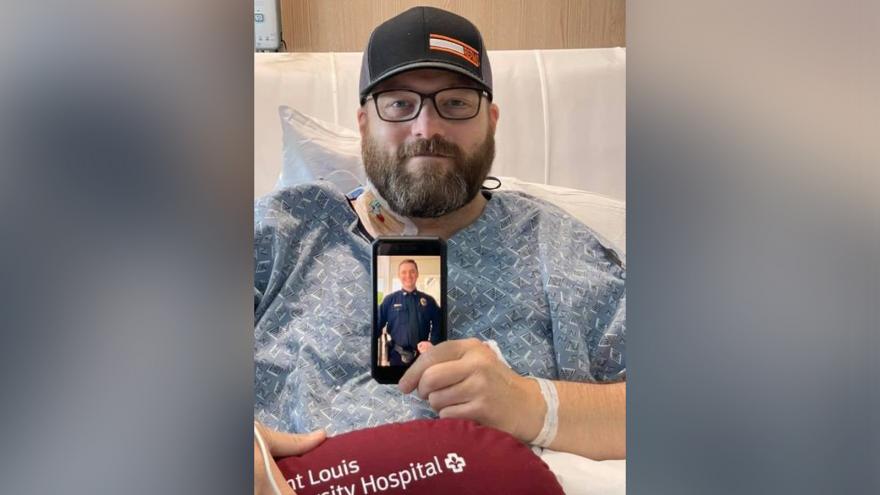 (CNN) -- Police officers are supposed to protect and serve. One officer's service is living beyond his time.

Officer Mark Priebe, who's been with Missouri's Springfield Police Department for 21 years, became paralyzed from the waist down after a suspect struck him in June 2020 with an SUV outside the police headquarters, officials said.

His injuries intensified a pre-existing medical complication with one of his kidneys, leaving him in need of a transplant.

"I was experiencing a lot of swelling," Priebe said. "My kidneys started to fail, and we had to start searching for a donor."

The family started the search by talking with relatives and friends and using social media, Priebe said.

Then, last Thursday, they got a phone call, he said.

A 22-year-old police officer at Independence Police Department in Missouri, about 150 miles north, was fatally shot the day before while on duty.

Officer Blaize Madrid-Evans was only two months into his career when he was killed.

Fellow officers described him as someone who always had a smile on his face and eager to help in the community, department spokesperson Officer Jack Taylor told CNN in a statement.

The Independence Police Department reached out to Priebe, and it turned out Madrid-Evans' kidney was a life-saving match. Priebe had never met Madrid-Evans but knew he was a new officer in training.

"I was just speechless and shocked," Priebe said.

With mixed emotions, Priebe is recovering from the transplant surgery at SSM St. Louis University Hospital.

"It's sad. I started out when I was 21, and to know this young man was just starting, and he knew the importance of donating organs. We were brothers in blue," he said. "... It's such a mixed bag of emotions."

Heather Priebe, Mark's wife, said that the gift of Madrid-Evan's kidney is bittersweet.

"I feel speechless. To be an organ recipient is one thing, but the story behind this is truly another thing," she said. "I sit in awe. There is a sense of guilt because his life was tragically taken, and here we are doing well."

"I look forward to meeting his family and honoring him in every way I can," he said, "and to raise my kids to honor Blaize and think of him."